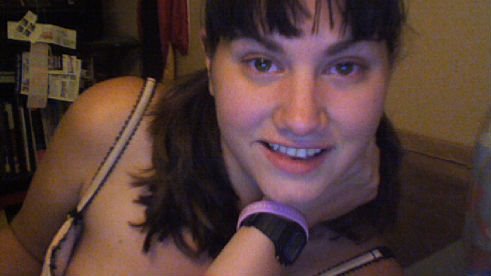 Megan Hurwitt is the foxhole atheist who recently enlisted in Texas and videotaped her ceremony. She refused to say “So help me God,” as is her right. She really started her military career without any shame of being an atheist – and it was inspirational.

So when I tuned into National Geographic’s new TV show “Doomsday Preppers” I was very surprised to see Megan in a starring role (or anyone I knew for that matter). I’ve kept in touch with her, but apparently not that well, LOL! Anyway, she came off like a real badass, but I was surprised by many of the things she said.

Near the end of this video you can see her mock the assassination of her kitty cat with a huge grin on her face.

That was taken way out context, as you will see.

National Geographic said her real reason for prepping was boring.

Justin Griffith: The scenario involving a gas crisis – Is that ‘one of many’ that you are preparing for, but perhaps the producers needed you to ‘pick one’?

Megan Hurwitt: Our primary reason for prepping, namely, gulf coast hurricanes, was deemed “not interesting enough.” We prep for any and all forseeable emergencies.

MH: Chances are, the only reason we would see an oil shortage in our lifetime, is if we anger the wrong countries. The chances that I will live through another katrina in my lifetime is pretty high.

JG: I think you can handle it when people ‘rip into you’, both physically and mentally tough as you are. You’re also funny. Care to share any ‘come back’ / retorts?

MH: It’s television, people. Don’t be a sucker. Do you really believe everything you see on TV?

JG: You got bleeped a lot. You said “when the shit hits the fan” quite a few times. I don’t trust people who make it a point not to swear, or use alternate words – it’s like they have something to hide. Seriously, if someone is *genuinely* preparing for doom, how can they not be swearing with a sense of urgency? I guess my question is, do you feel like a realist, surrounded by kookier ‘preppers’ (at least on the show?)

MH: I was self-censoring for most of the shooting. The camera crew urged me to stop, and begin swearing. They shot the show to make me look crazy. In regards to feeling like a sane person among kooks, absolutely not. I know several of the folks on the show, and they’re very smart, very well-prepared individuals. They’re on the same forums as me. I have nothing but respect for the other folks on the show. 🙂

MH:I did say, don’t be caught in front of the fan.

JG: You seemed to think through crisis scenarios to many of the disturbing logical conclusions that many others shied away from. I was intrigued when you suggested that unprepared women would unfortunately likely to be over-representing the oldest profession. Or as you put it, “whoring themselves out”. You seemed to almost accept this fate yourself, almost as a ‘plan Z’. I take it this is absolute survival with cold hard logic backing these potential ‘skills for trade’. Care to elaborate?

MH: Many people will surprise themselves resorting to things they would never have dreamed of, once their kids begin to go hungry and there is no end in sight.

JG: Your message of birth control concerns was pretty funny, but it does seem like an important part of a survival plan. Even “The Walking Dead” on AMC has explored pregnancy as almost a sure-fire way to get killed in a zombie scenario. Even in your reality-based scenario(s) it does seem to still be quite an issue.

MH: BC for me is a big deal. I don’t want kids. I certainly don’t want them in a crisis scenario. The Walking Dead ep where she behaves irresponsibly does make me irate. I understand that some folks cope with crisis in….unusual ways. Be responsible about it!

JG: I laughed really hard when you danced around suggesting that “When the shit hits the fan… I’ll be prepared, and that other person will be (can’t remember at the moment… but it was funny)”

MH: The comment I made about laughing about that woman starving was tacky, and in terrible taste. I regret it. I would never wish misery on others. I joined the military to HELP people in crisis. Not gloat when they starve.

National Geographic should be goddamned ashamed of themselves – This is WRONG!

This was edited to make her so completely cold-hearted that they jumped to her smiling as she feigned shooting a cat in the back of the head, completely out of context.

JG: Why not just set the cats free? Or take them with you?

MH: That comment was taken so terribly out of context that I will NEVER forgive Nat Geo or Sharp Entertainment for it as long as live. They conveniantly left out a few key points that I discussed before and after that quote: that I would never let my bf shoot the cats. And that they asked what we would do in a scenario where there was no more food, and nothing would grow, like in a nuclear wasteland. As long as there is food, my cats will eat. Hell, I would feed them before I fed myself. My bf only means to euthanize them if the ONLY other option is to watch them starve to death.It goes to suppose in that scenario that we too would also starve to death.

My cats are not declawed. If things go bad, but they can hunt, we will turn them loose. If we can take them with us, we will do so. I wish folks had some idea of how much we care for those two. They have two hugh cat trees that take up a lot of space in the apartment. They have two filtered fountain water dishes. They eat $50 a bag cat food. They get their shots every year, their worm pills every three months, and their flea treatments every month. They get cuddles and playtime every time they ask. They get supervised outside time 30 minutes in the morning and again at night. They are spoiled rotten. And something that Nat Geo didn’t mention? The producer offered me $1,000 to shoot my cat on camera. Fuck him, fuck the editor. 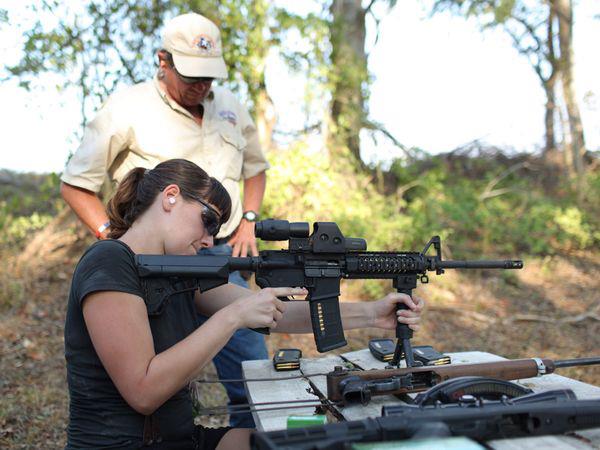 JG: Has your rigorous fitness regimen helped you as you started your military career?

MH: Yes and no. Most tend to be religious. Some are more in your face about it than others. I don’t believe that there is a wrong reason to prep, because being prepared is always good, and even though I may not believe in certain doomsday scenarios *coughrapturecough*, I do believe in natural disaters and domestic and foreign terrorism. The craziest reason I’ve heard of to prep was a man that believed Obama was the anti-christ, and that he would sell the world to Satan, who would reign as King on earth.

JG: Quite amazing. This will certainly make you look A MILLION TIMES less crazy than people may assume. I already had the feeling you were heavily edited, which is why I just let the questions flow. Like I said, you just need your own show. You’re a badass!

February 9, 2012 Chaplain: "Life without faith is like a tree with out roots"
Recent Comments
88 Comments | Leave a Comment
Browse Our Archives
get the latest from
Nonreligious
Sign up for our newsletter
POPULAR AT PATHEOS Nonreligious
1

Josh Duggar and His Entirely Unsurprising...
Roll to Disbelieve
Related posts from Rock Beyond Belief