Spiritual Fitness: “Chaplains are advocates for everyone”

Spiritual Fitness: “Chaplains are advocates for everyone” February 10, 2012 Justin Griffith 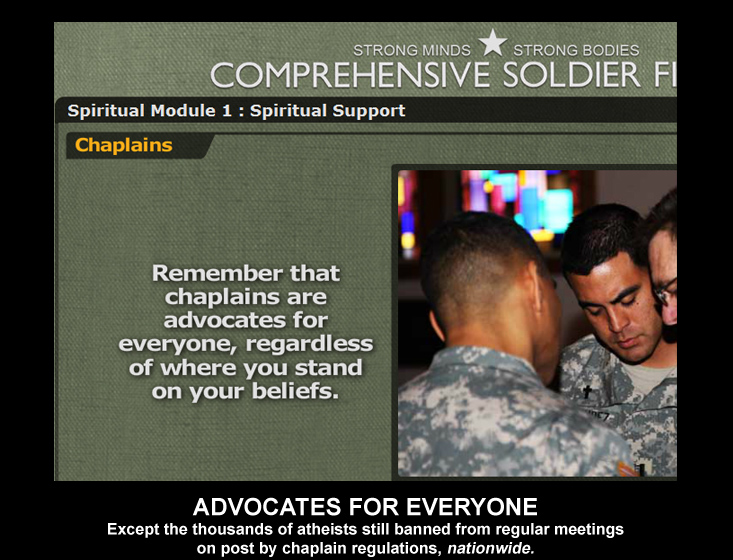 The above image is part of that mandatory Spiritual Fitness training you (yes, you) can help us debunk! Participate in that survey to help scientists help foxhole atheists.

“DFGLs will not conduct services before approval by the IMCOM or MEDCOM Command Chaplains.”

This means we can’t even meet in some gazebo on post. Or near a dumpster. Not allowed, and we’ve been reminded by them several times. Tomorrow’s on-post meeting is historic, but it’s not in defiance of this ban. We sidestep it, in a one-off manner due to circumstances surrounding the upcoming Rock Beyond Belief festival – which is approved independent of the Chaplaincy.

(Much more below the fold)

DFGL is military jargon for ‘lay leader’ when a Chaplain is not available for a particular religious preference. Multiple service-members at multiple bases have met all of the requirements, including having a chain of command of chaplains themselves sign off recommending approval. But as soon as the packets hit the next higher headquarters (IMCOM / MEDCOM), they just sit in limbo, or get disapproved.

Many chaplains get it. Many chaplains support us. They’ve even said “If I support you, I support my rights to do what I do.” Unfortunately, at the decision makers at the very top (who have never met any of us) are refusing to accept any of us. This discrimination has the effect of pitting the entire chaplaincy against the atheists.

Atheism is not and never will be a religion. But it is a religious preference.

All we want is the use of the buildings, and a meaningful way to have our meetings – to include being able to pass the hat for sustainability. Becoming a 501c3 tax-exempt non-profit takes 8-24 months for approval, and an $800 form from the IRS, which may even be denied. But the chaplaincy has an existing work-around that makes sustaining a group – such as MASH Fort Bragg – possible. Every group in their program can pass the hat around without having to pay complicated taxes, in centralized sub-accounts of a non-appropriated fund. Every approved group.

That’s why we asked for a bit of donations earlier this week. It’s very expensive for the core group of soldiers (who aren’t rich) to keep the group going. We can’t wait on the chaplaincy any longer, we simply have to go through the grueling 501c3 process.

“…chaplains are advocates for everyone, regardless of where you stand on your beliefs.” Right now, that’s complete bullshit for atheist groups.

But I’m still optimistic for the future.

I’d say most chaplains in general are neutral or on our side. Check out this recent quote from a very high ranking chaplain in the Air Force. Col. Robert Bruno, the USAF academy’s senior chaplain said:

“The First Amendment guarantee of freedom of religion does not just apply to the mainstream faith groups. It also applies to atheists, secularists, freethinkers and those whose belief systems are usually classified under the umbrella term ‘Earth-centered spirituality,’

Even if we were all of a sudden approved, saying that would instantly fix everything is an overstatement. There are several alarming issues that need to be addressed. But we have supporters on the inside, and they are starting to listen.