Reverend: “What does the military put on gravestones of atheists, a thumbs-down?”

Reverend: “What does the military put on gravestones of atheists, a thumbs-down?” February 20, 2012 Justin Griffith

The recent article about mandatory Spiritual Fitness in the Pasadena Sun was overall quite positive. Out of a group of 10 or so religious leaders from various religious preferences, the vast majority were on our side. I’m actually happy that only a few took a stand against us.

One of them at least tried to pair his response with the US Constitution, but fell victim to the Army’s smoke-screen ‘this is about team-spirit’ etc. I left a comment containing a thorough refutation. I invited civilians to educate themselves with the Army’s Virtual Spiritual Fitness Center to decide the religiosity of Spiritual Fitness (website by the same people). My comment was actually supposed to be a part of the article itself, not sure what happened there.

But then Rev. Bryan Griem lost his damn mind. Fuck everything about this:

There’s an adage I expect will be repeated by other ministers responding to this question. It goes, “there are no atheists in foxholes.” Meaning, when bombs burst, everyone hedges their bets and prays, “God, save me!” There’s a joke about one combat vet who prayed “Lord, if you’re there, I’ll serve you and attend church every Sunday; just get me through.” The Air Force immediately comes and blasts everything, answering the man’s prayer. He then looks up to heaven and says “never mind….”

Look, you just read the stats: “Researchers have found that spiritual people have decreased odds of attempting suicide, and that spiritual fitness has a positive impact on quality of life, on coping and on mental health.” Atheists be damned. They will be. So I really don’t care what they think regarding these tests. I’m tired of having their constant nagging, their constant opposition against God — their evil. They contribute nothing positive in the long run.Their very name, “a” theist, means they are “against,” with a big “no” regarding America’s “creator” and “Nature’s God” (the one mentioned in our Declaration of Independence). I’m frankly sick of them. Why they are here on the In Theory cast is beyond me. It’s like saying, “I have no spiritual input because I don’t believe in the spirit. So here’s my ignorance….”

I wonder what the military puts on gravestones of atheists, a thumbs-down? Listen, all religions are protected by our laws, but atheists don’t countenance America’s documents that mention God. They don’t actually deserve rights that even bizarre religionists have. If it could be shown that people who deny God create military weakness, however small, what should commanders do when choosing a winning military? I agree with you.

Readers quickly noticed that Pastor Bryan has a form that lets you contact him. I sent him an email, and I recommend you do so as well. Let me know what you get in response. I imagine a big fat nothing.

There are foxhole atheists out there fighting for your rights. Are you not willing to return the favor by standing up against the unconstitutional religious testing? 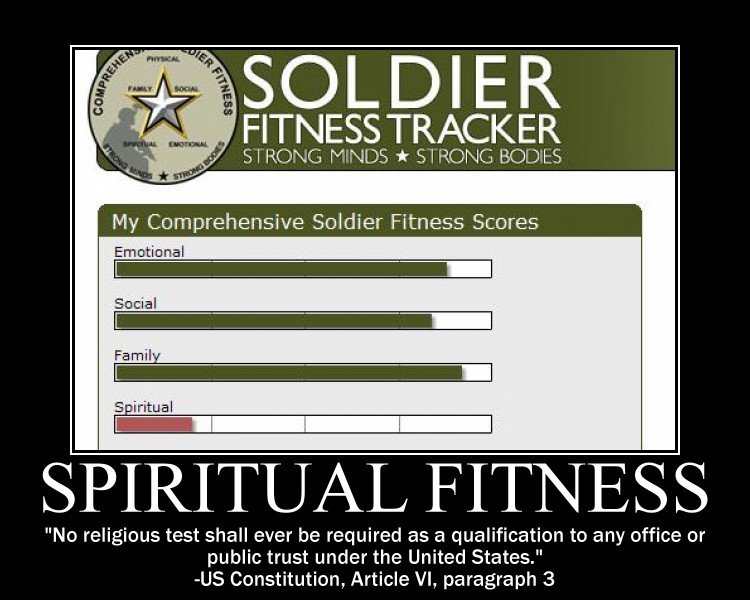 This motivational poster was made by my friend SGT Dustin Chalker. Dustin was a foxhole atheist who has very recently left the service. He’s studying law right now. Hurry up, man, graduate! We need you.

February 22, 2012 Pastor Bryan Griem belittles more US soldiers
Recent Comments
61 Comments | Leave a Comment
Browse Our Archives
get the latest from
Nonreligious
Sign up for our newsletter
POPULAR AT PATHEOS Nonreligious
1

'Joseph Masturbated In The Corner, Too'...
Laughing in Disbelief
Related posts from Rock Beyond Belief