Christians want to burn down interfaith chapels on military bases

Footage has just emerged showing that it was the Christian event that threatened to burn down the chapels, not the atheists.

I’m sick of getting death threats and other nastygrams about how I’m supposedly burning down churches for Obama (seriously). It all started a few weeks ago when Fox News picked up a story from a cyber-stalker of mine. He took a music video from Aiden way out of context.

He’s being sardonic. He is talking about how he disapproves of the religious infighting that has plagued our planet for thousands of years. Lead singer William Control has stated so several times. It’s in the first few seconds of this video:

Cool video, I might add. There’s a little Christopher Hitchens in there at the end too. But it was purposely taken way out of context in an effort to force them off of our lineup at Fort Bragg’s Rock Beyond Belief festival. They will be playing this song. And all of you should come out the show (or else you hate the troops, or something.)

Now an evangelical chaplain is demanding that Fort Bragg cancels our event, in an open letter to the commanders. He even claims that no such language was used by the people running the evangelical ‘Rock the Fort’ event that inspired our atheist festival. But Chris Rodda just uncovered an amazing clip from a Rock the Fort event.

Read her full article, it’s quite disturbing. My cyberstalker is much higher in rank than me, and I can’t really respond to his vitriol. But Chris Rodda does. Don’t waste your breath on a reply to that open letter to the chaplain. Save it for when Fort Bragg announces their support of our festival in the next few days. 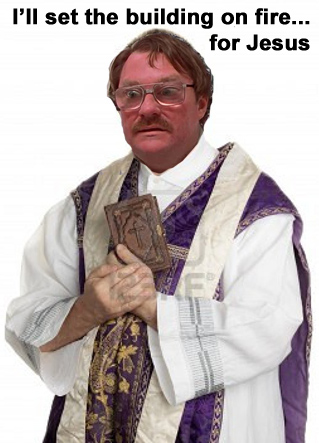