How has the massive atheist festival on a military base not broken through to network television news? The awesome stuff at Reason Rally probably had something to do with it. But that’s over now – so please help us get the word out – now!

Finally, MSNBC has some meaningful coverage:

After a sometimes painful 18 months of gestation, Sgt. Justin Griffith of Fort Bragg, N.C., exclaims, “My baby is about to be born!” His baby is Rock Beyond Belief, apparently the first major atheist event on a U.S. military base. 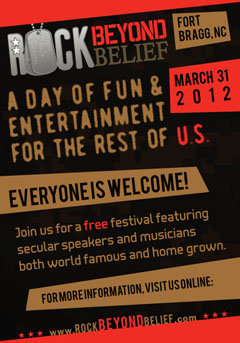 Griffith, 29, who has served five years in the Army, including two deployments to Iraq, has been wrestling with the overwhelmingly Christian establishment in the Army since September 2010 to get to this point.

The March 31 event is Griffith’s answer to Rock the Fort — a day-long evangelical Christian concert and festival held at Fort Bragg on Sept. 25, 2010, put on by the Billy Graham Evangelistic Association, with the support and blessing of the military brass. It was the fourth in a series of events sponsored by the group on various U.S. bases dating to 2009.

Among the headliners for the all-day atheist festival on the base are scientist Richard Dawkins, the rock band Aiden and singer/songwriter Roy Zimmerman.

Griffith is most proud that the event has garnered the same material support from the military that it gave the evangelical Christian event. This week, he announced that he had secured a commitment for the U.S. Army Golden Knights — an elite skydiving team — to perform in the festival, despite the reluctance of some of the team’s Christian members.

“We asked for apples-to-apples treatment to the (Christian) event,” said Griffith. “We fought for it. I won. I think (Fort Bragg leadership) won too because they did the right thing.”

I’ve been incredibly busy these last two days in DC. I’m about to give a speech at the American Atheists convention, but first I have to write it (!)

Slight correction, I was deployed on the border of Iraq and Kuwait. It was technically a combat tour, but I’m not comfortable with saying “deployed to Iraq.” We had it easy on our side of the fence, but there is no shame in the role I played in the draw-down either. I can’t really talk about it, for obvious reasons. But I missed half of the months my daughter has been alive, and I did some next-level shit and operated at several pay-grades higher than many would expect. I’m not a war hero, but I guess now I sort of play one on MSNBC. Whoohooo!

Fort Bragg is probably more important than the Reason Rally

Anyway – I can’t stress enough how important it is to show up at Fort Bragg, NC for the Rock Beyond Belief festival. Reason Rally was great, it was poetic, it was important. In my opinion – maybe I’m too close to this thing – RBB is much more important. It is:

But all of that fails if we have a low attendance.

If nobody shows up, then the military will feel justified in their earlier ‘broom closet’ treatment of forcing us into a tiny movie theater. It will effectively set us back another decade.

Please. Come out, and bring your family. Stay for the whole day. Foxhole atheists are out there fighting for your rights. Please, return the favor – March 31st at Fort Bragg, NC.

March 27, 2012 Fort Bragg wont let us feed homeless vets at the atheist festival
Recent Comments
18 Comments | Leave a Comment
Browse Our Archives
get the latest from
Nonreligious
Sign up for our newsletter
POPULAR AT PATHEOS Nonreligious
1