Surprisingly, 39 percent of Marines in this platoon are nonbelievers

Surprisingly, 39 percent of Marines in this platoon are nonbelievers April 6, 2012 Justin Griffith

These Marines are stationed at Camp Pendleton. This platoon is in an artillery ground combat unit. Names are withheld. 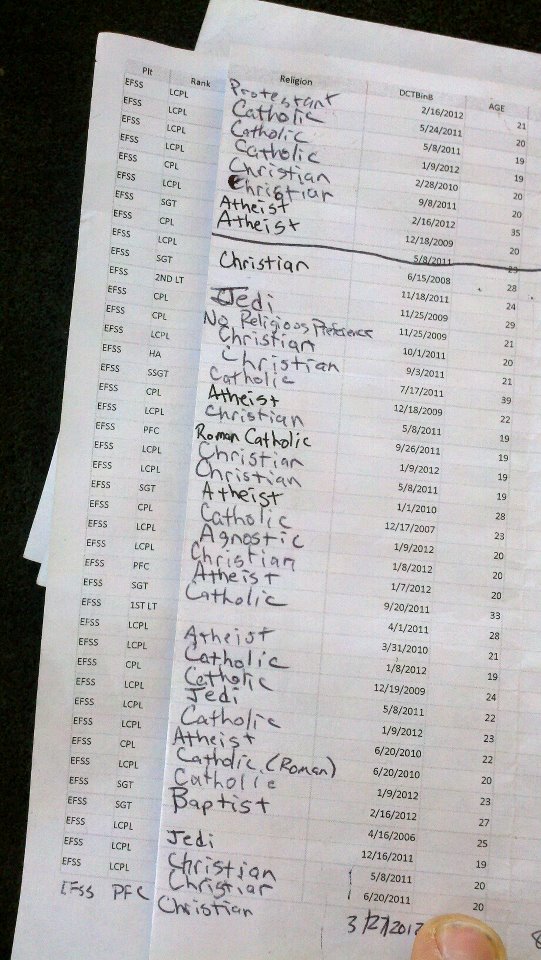 Here is some more information from the source:

I didn’t get to ask the two Lieutenants and my other Sgt but I know they are religious. As I stated before there were 7 avowedly open atheists, 1 agnostic, 1 no preference (his description made him an agnostic), 3 Jedi (1 serious, 2 atheists joking around), 2 protestant Christians and 2 Catholics who admitted to me (because of my openness about my lack of faith) that they were closet atheists who did not wish to reveal that information on a roster for fear of hurting their family… I know some of these guys I think there are 2-3 others that just didn’t want to address the issue.

The lined out one is a Marine who just left the platoon so disregard that one. So the totals come to 16 who are free-thinking individuals that are atheist/agnostic (and maybe one Jedi?…not sure how anyone seriously believes that) out of a platoon of 41.

About half the guys who openly volunteered their lack of belief are combat vets with at least one tour. Some, like myself, with multiple tours.

39% may be a bit of a statistical anomaly, but it’s certainly indicative that  the ’30 under 30′ message that Dave Silverman drives home is correct. He’s referring to the nation’s growing ‘young atheist’ demographic, some measurements apparently at 30%. This particular sample is obviously not large enough to extrapolate demographics for the entire USMC. Still, though… this is extremely encouraging, and it does make you wonder.

One of my first thoughts was that this was from a Psy-ops, intel, medical, or other specialized support unit. I thought that would explain the higher numbers. Discovering that this was actually a combat-ready artillery unit was a pleasant surprise. I think the real explanation for the higher numbers are the four closet atheists who are too afraid to even put the word down on a silly piece of paper. The person who sent me this mentioned that his own ‘out’ atheism was likely a key factor for the four of them whispering their true religious preference into the ear of someone they felt they could trust.

We are extremely under represented in the military. I’d bet that most of these foxhole atheists do not have “ATHEIST” on their official records. Some are too afraid, some are wrongfully told that atheist isn’t an option (and they’re stuck with the disastrous  NO-REL-PREF).

I want all atheist military members reading this now to take the time to fix your official records to say ATHEIST. It only takes two minutes to fix them. You can either go to your S-1 or click below to find out how to fix it yourself online.

Out of those closets. Walk tall brothers and sisters, silence is part of the problem. Silence reinforces the culture of shame and fear.

This list is not even close to exhausting the problems our community faces, yet it represents active discrimination on a massive scale. If nobody calls them on it, the situation festers. You can help at the local level. Stop turning the other cheek. We love the military. It’s our responsibility to make it better. It’s our duty to report violations of law and ethics. Identifying as an atheist and standing up for your rights simply makes the military a better military.

Change can be rapid, as we already see at Fort Bragg.

April 6, 2012 You have to pick a different religious preference. I can't spell.
Recent Comments
12 Comments | Leave a Comment
Browse Our Archives
get the latest from
Nonreligious
Sign up for our newsletter
POPULAR AT PATHEOS Nonreligious
1