2-508 PIR promises to support all the atheists they banned

2-508 PIR promises to support all the atheists they banned May 2, 2012 Justin Griffith

So they posted the flyer again. But they FIXED IT! It no longer appears to give religious soldiers the morning off. It also no longer says their unit (and the command associated with it) are specifically endorsing this thing. 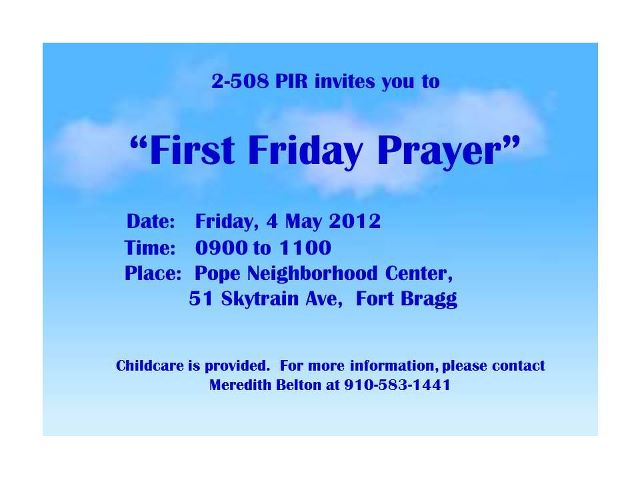 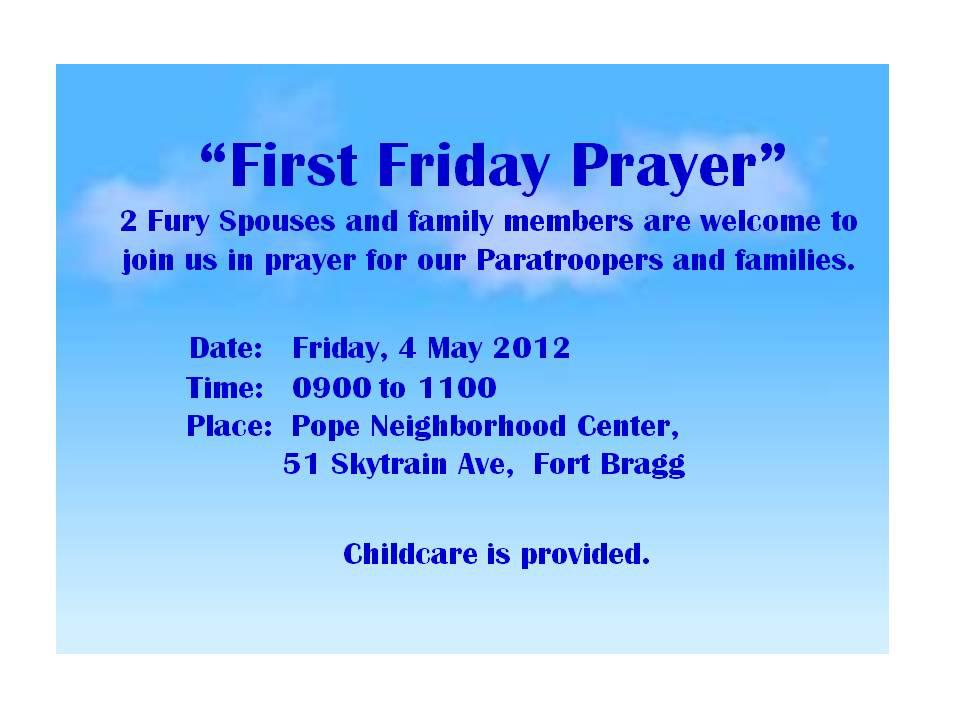 This is not perfect, but is an improvement. There are bits of sanity attempting to ooze out of this explanation they offered:

There was a much better way to air your grievance than encouraging every follower of your blog to post on our site. You could have simply contacted us and pointed out the error of our ways and we could have pulled it down and corrected it. We acknowledge that our 1st posting wasn’t as clear as it should have been. As it stands, the flier has been re-published with no reference to it being a unit sponsored event. Our only other option is to mass email the flier to everybody affiliated with 2-508th PIR. We choose this forum because there are many family members that visit the page, but choose to NOT be on any mailing list for the battalion.

Mrs Belton is our Battalion Chaplain’s wife and is the unofficial spiritual adviser to the Family Readiness Group. She is a member of the FRG steering committee and sought approval before posting the flier. Her activities in support of the FRG do not fall under the auspices of a non-governmental agency, in our opinion.

*Justin Griffith: note: the child care being provided is coming out of Mrs. Beltran’s pocket. This is most certainly not a government entity, otherwise the Family Readiness Group would pick up the tab. She also says that this Friday is the first time she isn’t doing it in her own house. You simply ARE advertising against your own policy. I don’t have a problem as long as you reciprocate the opportunity to all groups.*

No disrespect was or is intended to people who choose to follow a totally different concept of religion or deny religion, altogether. If referring to the gathering as a prayer group somehow violates any law, we will consult with our SJA and change the wording to something more appropriate, such as a “fellowship gathering”.

However, many of us have read the Constitution and the amendments and are not completely oblivious to their meaning, regardless of what the media or splinter groups attempt to push as the meaning. English is a pretty straight forward language for native speakers.

Congress shall make no law respecting an establishment of religion, or prohibiting the free exercise thereof; or abridging the freedom of speech, or of the press; or the right of the people peaceably to assemble, and to petition the Government for a redress of grievances.

That very intrinsically states that you can’t prevent the free exercise of religion. In no way is our flier in the 1st or 2nd form a mandatory function, just an offer for people that would like to attend… an offer. You may find some law, somewhere, that states that we can’t do what we’ve done. Please, educate me by attaching that law.

YOUR Blog posting’s very title suggests that soldiers were getting time off to attend a prayer group. I hope that you realize by now that was never the intention and was never implied. I must admit it was good hype and it most likely had your desired effect. The fact that your supporters kept coming back to restate that lie is an indication that your insistence to make this an issue is a political agenda. That is the problem with assuming facts not in evidence. Please, explain to your followers that arguing a lie, does not make the lie come true.

It is within our right to moderate our page as we see fit. We will continue to delete comments and block posters that violate our standards. If we err in that process, well… we aren’t lawyers and our intent is to limit any ensuing drama, not to offend folks. We are Infantrymen and common assumptions paint us as Neanderthals, with our knuckles dragging the ground. I guess that I can “play” stupid, even if I am not.

I probably would like you if we talked, simply because you are taking a stand for your belief, but I doubt that you would convince me that we are in any sort of intentional blatant violation of any law. I do not approve of your tactics, because you prey upon people’s ignorance of the facts, in this case your facts did not stipulate that soldiers were not participating in the event. You simply led the masses to believe that atheist soldiers were being denied the same opportunity that religious soldiers were being provided, which was entirely false.

If we had an atheist group that requested to post a gathering announcement, they would be provided the same opportunity. The fact that no atheist group is identified within our organization, is not grounds to exclude others from posting their functions. Encourage them to come forward and they will not be denied that opportunity. They must be members of the battalion or extended family members of soldiers assigned, just to be clear. Someone outside the organization organizing an event, especially outside the immediate area, we probably won’t take seriously, especially if they haven’t been an active FRG member. So, please inform your blog followers that an inundation of requests for services will be compared to our FRG list and if they aren’t members, the request will be discarded out of hand.

As for coloring you as political, your blog IS political and furthers a political agenda. Having your followers post to our site was a political decision with political aims… post to tell us how unconstitutional we are. You are attempting to make us change the way we communicate information to our families. Having them scream “censorship” when we delete them for using our page as a referendum for their political agenda or social change is another avenue of politics.

Honestly, where we are wrong, please point it out with the legal annotations and facts. I am not trying to challenge you on everything, but I simply do not see where we erred in our execution of a simple prayer group announcement. Next, you are going to tell me that a posting that alludes to praying for our soldier’s safety, is unconstitutional… in which case, I’ll use expletives and dare you to pursue legal action… because I will be long retired before it comes to trial.

Other ways to contact? I tried. I called. I asked. I emailed the (pre-enterprise upgrade) email address listed for such purposes. I waited a few hours before posting my follow up.

In the end, you posted a flyer that no longer has the appearance of a command endorsement on the surface. It still shouldn’t come from the official 2-508th PIR Facebook page. HOWEVER, you did promise an equal level of support. Isn’t that all I asked for? I corrected you, and you listened… twice.

I’m not seeing why having so many supporters = politics. You listened to them. You listened to me. No need to ban them just because they got there from me. I’ll turn off the fire hose, though. FYI – you did ban members / spouses of your unit. How do you think I even heard of Mrs. Belton’s prayer service?

You also conveniently glazed over the constitution that you quoted – and are completely ignorant of the subject of ‘limited public forum’. But as you say, you are not a lawyer, and I’d probably react somewhat like you too. Relax, it’s over. Now read this:

Limited Public Forum Basically, this is the only work-around that could possibly make your new flyer (from this morning) legal. To put it in layman’s terms, if 2-508 PIR welcomes one point of view on a particular topic, it MUST welcome all points of view on that topic. Your promise to support atheist troops basically accomplishes this. However, since you banned us all we can’t say ‘thank you’.

And you also failed to realize that those initial comments were all VERY RESPECTFUL, and from veterans and soldiers, many of whom are deployed (a few who are deployed with your unit). Your deletion of their points of view creates a very one-sided conversation that treats atheists as if we are the enemy. This undermines the limited public forum that you are obligated to maintain. Seriously, you need to allow all points of view and moderate comments only based on content (swear words, Ron Paul spam, etc…. those are bad.) and not point of view (‘I like prayer’, ‘I don’t like prayer…’ both are welcome).

We are going to slam that closet door behind us. There are more atheists in the military than Jews, Muslims, Wiccans, Buddhist, Hindu…. But you wouldn’t know about that, because most are afraid to ‘admit it’. That changes now. It’s already happening. Expect and accept us.

While you still aren’t 100% legally compliant, it’s clear that you are attempting. You have done well, despite your nervous reaction to a point of view the Army is used to keeping in a closet. Charlie Mike.

My very first comment was about how I supported the Free Exercise clause, and thought it was important. This person thinks that we want all prayer banned. We simply want equality. If he had just read our comments, he’d know this.

Here is the comment that I was banned for making (before they clarified that soldiers weren’t invited):

Yes, but it’s during the duty day. Are there equal ‘time away from work’ opportunities for non-religious soldiers?

I’m all for religious soldiers getting their needs fulfilled (free exercise clause of the US Constitution is important). However, if you do not provide the same ‘time off work’ opportunity to non-religious soldiers (with free child care), they are effectively being punished for not being religious. Do they not deserve a break to contemplate, have fun with their families, and growth in their community?

Perhaps most importantly, it sets up non-religious soldiers with their religious peers’ workload.

May 3, 2012 Atheist veteran investigated by police for NOT littering
Recent Comments
10 Comments | Leave a Comment
Browse Our Archives
get the latest from
Nonreligious
Sign up for our newsletter
POPULAR AT PATHEOS Nonreligious
1