Atheist veteran investigated by police for NOT littering

Atheist veteran investigated by police for NOT littering May 3, 2012 Justin Griffith

After serving in Afghanistan Steven Hewett came home to King, N.C. They don’t ‘take kindly’ to atheist folks ’round these parts. Their public Veterans Memorial had a Christian flag flying over it, and when Steven complained… the whole town attempted to chase him out of town. 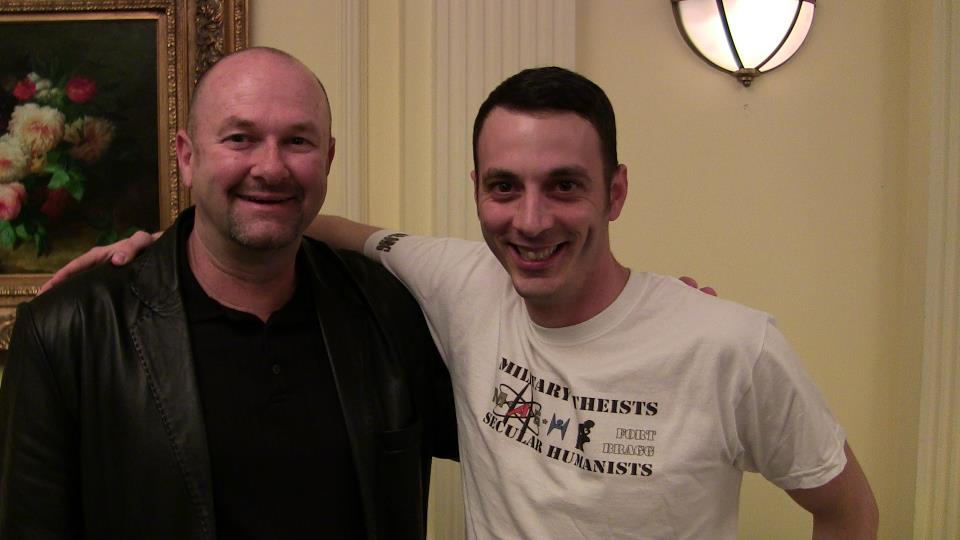 This is the man that an entire city held rallies against – including senators! They were two torches and a pitchfork away from making good on their violent threats to remove him.

Rather than take down the flag, they came up with a ridiculous smoke screen system that pretends to satisfy ‘limited public forum’ laws. They have a lottery that citizens can participate in where whoever wins a slot gets to pick that week’s flag. To this day, only the Christian flag has flown. Steven has chosen not to fly a flag on the occasions that he won the disgusting lottery.

Yesterday, Steven left a disturbing message on the Facebook wall of the “Remove the Christian Flag from King” group.

WOW, I really can’t believe this, but the King Police Department has sunk to a new low.

I had two Investigators at my door this afternoon wanting to question me about my week to fly or not fly a flag at our Veteran’s Memorial.

At 9:00 am on Monday the 23rd of April the flagpole became mine as per the Limited Public Forum Policy. At 9:15 am the Christian flag was still flying and had not been removed as per policy by the previous week holder.

Being with my rights to remove and dispose of such flag (properly so as not to litter) it was placed in a nearby trash receptacle.

The police department sent two investigators to questions my actions and are sending the investigation report to the District Attorney’s Office to pursue charges against me.

For what violation of the law you may ask?

Just another way to harass a taxpaying law abiding citizen!

He further clarified in the comments section that he actually went all the way to City Hall to ask the person who should have removed her flag to… well, remove her flag. This is nuts:

Larry: I am on your side, but didn’t you expect trouble when you threw away their flag? Wouldn’t you have been upset if you had left yours up and they threw it away?

Steven Hewett: No, because I will take down my flag at the time I’m suppose to and not infringe upon another’s freedom of speech. Do you think for one second they would treat mine any different? I think not. I did not remove their flag until 9:45 after going to City Hall and speaking to the town clerk Tammy Hatley as to who was specifically responsible for removing the flag. She advised me to remove the flag and dispose of it as I pleased.

This town is pathetic. The town participated in a documentary but now they refuse to watch it. The filmmaker said that he asked them months later if they wished to retract or modify their statements, or if they had a change of heart. They didn’t, but somehow they were still mad at him for their own statements.

“Homosexuality is worse than slavery because god never said slavery is wrong.” (paraphrased)

Watch the film if you haven’t already.

Steven also just posted the document describing the city’s policy on the flag lottery. This is the document that the city of King, N.C. thinks solves their pending legal troubles? Wow… Americans United is already on the case, and are not placated by this see-through strategy. Please leave a supportive message on this hero’s Facebook group!

To my Christian readers:

Where are all the ‘moderate Christians’ slamming them with appeals for sanity? Bring your Scotsman fallacies, I don’t care. Say something! Come on! This is a different type of crazy than Westboro Baptist Church – but you need to implement the same quality controls and exile them to the fringe. They make Christians look stupid, and turn more people into atheists. Is this mania what you want to be associated with? Ridicule them, chastise them, teach them… do something!