The protest at Berean Baptist was well received by the community and surprisingly well covered by the media. Apparently something is coming on tonight on CNN’s AC360 with Anderson Cooper.

Initially, Sean Harris said that he would not be doing any interviews, but that the press was welcome to come inside to talk to the church members. I pleaded with their people to allow me to sit down with him, and they huddled. I told them that I did lots of interviews all day, and it was in their best interest to get their side out too. They agreed, and then I alerted the various local news stations. They filmed my interaction, but few used any substantial portion – the media always minimizes the atheists role in any ‘good’ story. It’s unfortunate, because it was eye-opening.

To be fair, he said “never beat your child” and similar statements many times. He even criticized the pastor who praised his now retracted comments – Mark Rowden. However, he’s got little control over the things that come out of his mouth. He doesn’t think of the words before he says them.

Sean Harris on how to beat your child

I asked him about ‘spare the rod, spoil the child’-

Justin Griffith: “But you wouldn’t literally use a rod would you?”

What sort of formula is at play here? If a child is heavy, and old enough, you use a baseball bat? What an odd statement.

Steering the vote, even at the urinals

I’m told that the women’s restrooms did not have voting signs up – whatever that means. 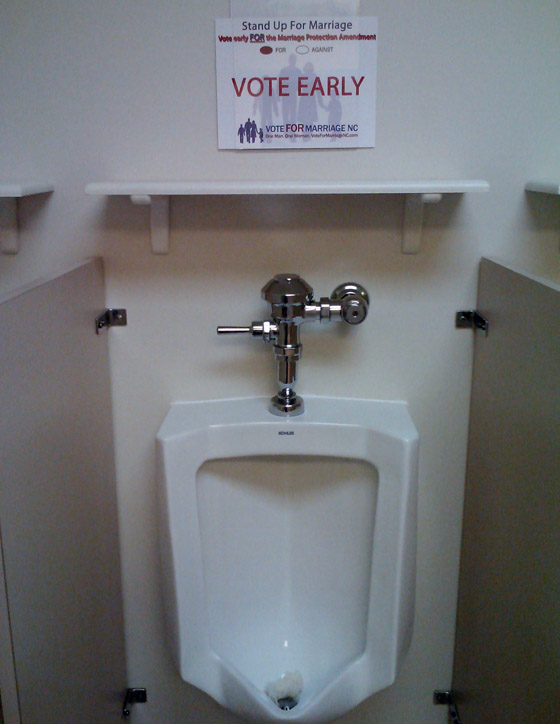 Let the video play out… It gets weird, especially when we discussed his ‘hypothetically gay son’. I asked him: “Can one man and one woman be proud of their gay or lesbian child?”