My name is Paul Loebe and I am a Marine Sergeant. I am stationed at Camp Pendleton and I am an atheist. I’m working on this: 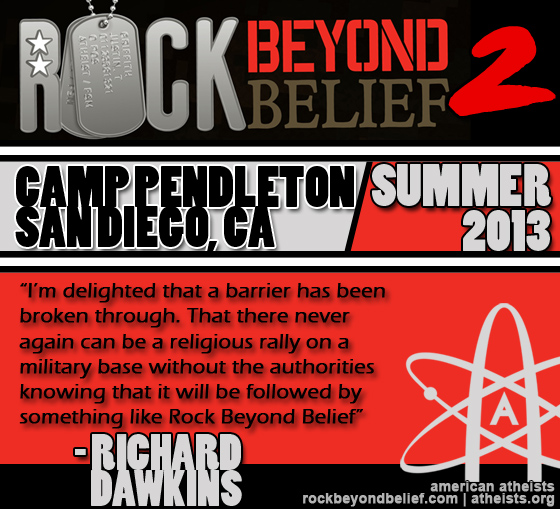 I spent a quarter century of my life heavily involved in church as a Bible-thumping believer. Then came the fateful day when I began to compare the teachings of the Bible alongside historical and scientific data and my path towards recognizing my cognitive dissonance began. Needless to say the mindless drivel that guides religious faith fell apart before my eyes and I was left feeling lost, alone, and without a sense of purpose in my life. Once the emotional drama within me faded and I began to look at the world without faith I saw it enshrined with a beauty that had been hidden by the blinders of “childlike faith”.

I first contacted Justin Griffith to express my adulation that 39% of my platoon consisted of non-believers or atheists. This astounding statistic surprised me to say the least. During that brief conversation I expressed an intense interest in continuing on with the momentum of the event that Justin had put on in Fort Bragg, NC. Perhaps it was the conviction in my voice or the manner in which I expressed no fear of repudiation in the fight for equality that I was about to embark upon but he fervently threw his support behind me.

Justin explained that the powerful Billy Graham Evangelistic Association (BGEA) had actually stopped doing massive evangelical festivals on military bases in response to his atheist event. He seemed reluctant to ‘just do a festival’ for the sake of doing a festival. I was about to deliver him bad news: BGEA was not the only game in town.

I knew that Camp Pendleton had a very cozy relationship with a multitude of church organizations and that that was only the tip of the iceberg. As I researched more and more I became disturbed at just how many different units were directly involved with the Christian indoctrination aboard Camp Pendleton.

The largest organization in question is the Armor of Light. They are an offshoot of the Calvary Chapel Costa Mesa. It took me quite a bit of digging to connect the dots between these organizations and their extremely close relationships with units aboard Camp Pendleton. Allow me to entertain you quickly with a brief history of this specific church.

–It was founded in 1965 by Chuck Smith and in 1968 quickly turned into a megachurch movement with their Pentecostal brand of fundamental evangelism. 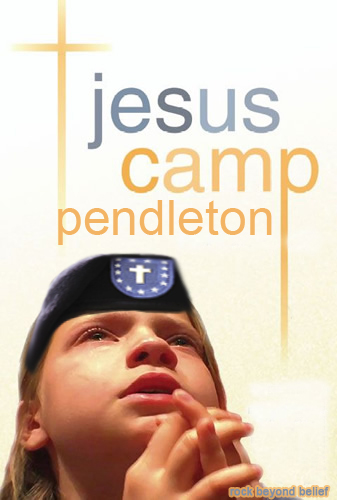 –They have spawned over 1,000 churches and are very influential in the Southern California area…especially aboard Camp Pendleton.

–In 1980 the entire church stood by awaiting the world’s end with a candlelight vigil on new year’s eve because of a ‘revelation’ that Pastor Smith received from Jesus. Well, I’m guessing you can figure out how that turned out.

–CCCM is so extreme that the son of Chuck Smith was ‘disowned’ by his father’s church for being open, accepting, and loving to people outside of their rigid belief system when he opened a liberal church of his own just down the street from his father.

–The military outreach program is the Armor of Light. They are deeply embedded within individual units, sponsor family days, prayer days, concerts, and rallies all aboard base with the explicit permission of Camp Pendleton.

–US Government facilities and active-duty personnel are being utilized on a massive scale with alarming frequency.

We can do this the easy way…

I began corresponding with the Marine Corps Community Services in order to see exactly what I would need in order to get an event aboard Camp Pendleton that would serve the needs of the “godless”: the non-theists, atheists, agnostics, skeptics, and freethinkers. I was met with trepidation and given no clear answer as to exactly what I would need to have a successful event.

Given limited resources and minimal assistance on precisely how to get an approved event put together I proceeded to get the funding required and got American Atheists on board. With the assistance of friends, a list was put together with potential talent. I continued to feed information to the base organizers and received little to no indication on whether or not I was moving ahead to properly get the event put together. Basically, I was being ignored. I’m guessing they didn’t take me seriously.

Or we can do this the hard way

After two weeks of this they finally did take notice! American Atheists submitted a Freedom of Information Act (FOIA) request on the activities that took place on base involving the Christian organizations and churches that put together concerts, family days, prayer breakfasts, food drives, and luncheons; many of them held during working hours.

The very next day I was called into the office and stood tall while getting yelled at for over an hour. Assaulted with claims of improper political activity and jumping the chain of command I was ordered to cease all activity for the event. I was denied the very rights I was serving my country to defend! I immediately began filing paperwork to speak directly to the Commanding Officer and Justin Griffith and others in the foxhole atheist community got me in touch with the Military Religious Freedom Foundation and its founder Mikey Weinstein.

Immediately after submitting my paperwork and becoming a MRFF  client, the illogical order to stop my attempts to celebrate with my peers who share my religious preference was rescinded. The Marine Corps has graciously accepted the offer to work with me on putting together the next Rock Beyond Belief.

However, some of the statements they are making are troubling. They might not allow it to happen and their reasons are alarmingly ludicrous and beyond my comprehension: from the fact that there are no atheist chaplains, to the ‘fact’ that there is no precedent for an event like this (untrue), and the illegality of not supporting my religious preference as they have supported the Christians which goes in direct violation of the Joint Ethics Regulation that guides all branches of the military. Justin tells me that he fought all of these battles too. His advice has essentially helped me sidestep a year’s worth of scrambling.

With the help of organizations like MRFF and AA, the freethinking community, liberal Christians, the organizations that stand for liberty, and the public at large I will not stop and will not rest until those of us; the skeptics, the freethinkers, the liberty hounds, the philosophers, the empiricists, those who claim “I don’t believe”, and those who claim “I don’t know” are afforded the same opportunities.

I need your help! I cannot do this alone. Spread the word. Come out to the free festival – civilians are welcome. More details will be forthcoming, but here are a few great reasons to make the trip:

I’ll be bringing you frequent updates about the upcoming Rock Beyond Belief 2. I’ll See you at Camp Pendleton summer 2013.

Disclaimer: Although I am an active duty Marine Sergeant I do not speak on behalf of the U.S. Marine Corps, the Department of Defense, or any affiliated branches.

May 20, 2012 PZ does it
Recent Comments
47 Comments | Leave a Comment
Browse Our Archives
get the latest from
Nonreligious
Sign up for our newsletter
POPULAR AT PATHEOS Nonreligious
1

Russell Moore: Not Really a Hero
Roll to Disbelieve
Related posts from Rock Beyond Belief