This is another one of those times that foxhole atheists need you to speak for them. West Point cadet, Blake Page has shunned anonymity. It was a moot offer on my behalf anyway, he already sent this up his chain of command, and they remain silent. Though he does not speak on behalf of the US Army or the DoD, he’s absolutely correct – this is not only illegal, it’s simply dangerous. 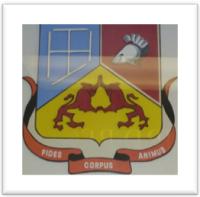 Bottom Line Up Front: The 3rd Regiment Shield and motto are currently in a state of selective non compliance with the US Constitution, the Supreme Court’s Lemon Test, Equal Opportunity Policy and promote a message which has been successfully used by our country’s enemies for the purpose of recruitment and motivation for attacks against US service members.

West Point’s own damning description of the Shield

“The Shield of the Third Regiment of the United States Corps of Cadets was designed to be a physical representation of the ideals of the Regiment as expressed in its motto, “Strong Bodies, Strong Minds, Strong Faith.”  The shield depicts the ideals through heraldic symbols whose historic significance has developed through the centuries.  At the same time, the shield is divided in a reversed tierce per pale design (three parts) to express the past, present and future of the Third Regiment.  The colors of the shield represent various branches of the Army in which members of the Regiment will one day serve.  The heraldic cross (crossed crosslet) in Chief Dexter (the upper left) was developed during the time of the Crusades.  This symbolized fidelity and represents the “Strong Faith” in the Regiment’s motto.  The light blue field upon which it is mounted is the branch color of the infantry.

The words on the ribbon are Latin: “Fides, Corpus, Animus,” which mean “Faith, Bodies, Minds.”  Classically, these three words relate the Regiment’s Motto, “Strong Bodies, Strong Minds, and Strong Faith.” … It portrays the close connection between the Regiment and the Corps of Cadets, and it predicts the fates of it members, the cadets of The Mighty Third.” 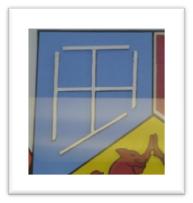 Position of the Cross Crosslet:

“the symbol depicting the organization’s mission or history faces to the right side (dexter) never to the left side (sinister) of the bearer.”  <source>

So, in Chief Dexter, the Cross Crosslet, is intended to represent the mission or history of third Regiment.  Is it really some ubiquitous symbol of faith?

Meaning of the Cross Crosslet:

This is not an example of ceremonial deism, it is an explicitly Christian symbol.  The Crusades aren’t something people of all faiths and philosophies can get behind.  The shield was designed in 1964, when West Point was still practicing not just mandatory prayer, but also mandatory chapel attendance, and not only just requiring cadets to go to church, but to memorize and recite the “Cadet Prayer.”  Those were different (read: archaic) times, and we’ve come a long way since then.  It’s about time we clean up the stains that mess left behind, especially considering the strategic implications of branding thousands of our Army’s future leaders as Crusaders.

Synthesizing the intended message of the third regiment shield yields a statement that the “mission or history” of third regiment is “world evangelism of the Christian Gospels.”  Even if the symbol intended to represent faith were something which could be applied to members of all faiths, which it demonstrably is not, the message of endorsing faith over reason remains a violation of law and Army policy.

Relevant selections from the US Constitution:

1st Amendment: Congress shall make no law respecting an establishment of religion, or prohibiting the free exercise thereof; or abridging the freedom of speech, or of the press; or the right of the people peaceably to assemble, and to petition the Government for a redress of grievances.

As a bureaucratic branch of the United States Government, commissioned by Congress, all units in the US Army, to include USMA, are subject to adherence to the establishment clause.  The inclusion of textual endorsement of religion over non-religion in the motto and symbolic Christian endorsement in the third regiment shield are both in violation of this amendment.

Established by the Supreme Court in response to the 1971 case of Lemon vs. Kurtzman, the Lemon Test established three criteria that all government entities must abide by in all cases<source>:

There is no arguably secular legislative purpose for endorsing “strong faith” in the third regiment motto.  The Cross Crosslet represents the advancement of religion, specifically Christianity.  Both of these represent an excessive government entanglement with religion.  Therefore, the motto and shield are in violation of each of the three tenets of the Lemon Test.

a. Participation. Military personnel must reject participation in extremist organizations and activities. Extremist organizations and activities are ones that advocate racial, gender, or ethnic hatred or intolerance; advocate, create, or engage in illegal discrimination based on race, color, gender, religion, or national origin, or advocate the use of or use force or violence or unlawful means to deprive individuals of their rights under the United States Constitution or the laws of the United States, or any State, by unlawful means.

Advocating the practice of Christian evangelism in the third regiment shield is representative of an unlawful endorsement of participation in an extremist activity.  Although Christian evangelism alone may not be considered extremist, the Cross Crosslet is an unambiguous endorsement of the actions of those who took part in the Crusades, as noted in the regiment’s own explanation of the symbol, actions which were certainly extremist in nature.  Furthermore, the superimposition of the symbol on a light blue field is a demonstrable symbolic unification of our country’s primary fighting force, the infantry, with the mission of Christian evangelism.  Even if all but one of these statements were false, the symbol is in selective non-compliance with AR 600-20.

The motto and shield of the third regiment textually and symbolically promote religion over non religion and Christianity over other religions.  This is a clear demonstration of unlawful discrimination.  By bearing a motto and shield which promote religion over non-religion in the “Strong Faith” clause, and Christianity over other religions in the Cross Crosslet, our regiment is effectively conveying “disparaging terms used to…connote negative statements pertaining to…religion…expressed as…printed material, visual material, signs [and] symbols.”  The use of which is unlawful.

1. The regiment is engaging in selective non-compliance with national law and Army Regulation.

2. It is disrespectful to all non-Christian members of the Corps.

Most importantly, it is an example of a practice which, in other regions of the world, has had very real negative strategic implications for our country.  Each of the incidents listed below provided the enemies of our country with tangible justification for their theories that we are engaged in a Christian Crusade against Islam.  Practicing the entanglement of religion and the military here fosters an environment which allows our Army’s future leaders to believe that this sort of behavior is in keeping with our nation’s mission.  Doing so endangers the lives of soldiers by providing our enemies with ample recruitment material and justification for a defensive Jihad.

Distribution of bibles by deployed soldiers during combat operations

– Remove the current shield and motto from public display both from the 3rd Regiment hallway in WH and the SOP binders distributed throughout the Regiment immediately.

– Commission the drafting of lawfully and ethically sound replacements as soon as is reasonably possible.

– Be vigilant of similar instances of constitutional and regulatory selective non-compliance in the future.

Page is not a ‘whistleblower’. It’s much more complex than that. He’s like me, we both love the military and our country, and we think that it deserves these corrections – to make it a better military. Evangelism in a government setting is bad enough, but theological saber-rattling in a group of men with sabers – that’s insanity.

Lawyers are definitely coming to help. However, it takes more than that – it takes people like you.

Please send a short, concise and respectful email to the United States Military Academy. Use this as a template, but feel free to completely rewrite / tweak it.

ATTN: Commanders of the West Point 3rd Regiment of the United States Corps of Cadets

I’m writing to express my grave concern that once again the U.S. Military will be seen in a public setting as endorsing a ‘crusade’ against the Muslim world where our nation’s troops are serving. It is reckless and dangerous to allow any bonafide crusader propaganda to besmirch our great nation. Please, immediately remove and/or replace The Shield of the the 3rd Regiment of the United States Corps of Cadets.

It’s unfortunate that this Shield could not only inflame the local populace in Afghanistan, but it also shamelessly violates the US Constitution. Please, get ahead of this scandal – quietly take this down before the media has a field day.

Please also share this / spread this to any people friendly to our cause. The buttons below really are for great justice this time.

May 24, 2012 Rock And Roll is Evil
Recent Comments
26 Comments | Leave a Comment
Browse Our Archives
get the latest from
Nonreligious
Sign up for our newsletter
POPULAR AT PATHEOS Nonreligious
1