Other slime pits I’ve waded through

I’ve been wading through various slime pits for the entirety of my activism. I’m done interacting with at least one. However, I’ve interacted with pits that I intensely disagree with for a variety of useful purposes. This is a small sample of the ones I don’t regret. 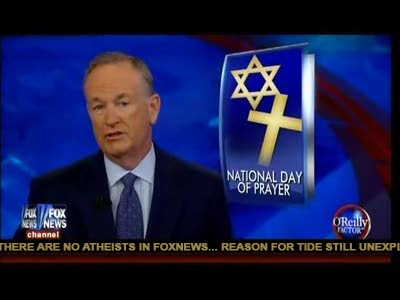 I’ve done many interviews with right-wingers, including Fox News. One time I was on a right-wing radio talk show on a station in Raleigh, NC, for what was scheduled to be a short (6 minute?) segment. Their phones exploded, and they asked me to stay on to take very heated questions from the audience. Every commercial break they’d beg me to keep answering them. I stayed on the air with them until their show was over. By the end of the hour, the show was over and I had convinced one of the two hosts and the last callers that I was right.

If you seek out part 1 and part 2, you’ll see that this journey into the local ‘talk radio slime pit’ resulted in a dramatic shift. It also clearly demonstrates that there is a way to engage people who may say hateful things – on their turf – and calmly shut it down.

Keep in mind the “Fox News / Right Wing slime pit” actually is a bit more diverse than outsiders may notice. I think this is the case for all slime pits. Interestingly, my appearance on the token left-wing Alan Colmes radio show was initially quite antagonistic. Alan clearly did not expect me to have intelligent answers to his gotcha questions. By the end, he too said that he agreed with me (though it was clear that he was conveying surprise at his own statement in a condescending way… “somewhat” diverse.)

Nearly a year later, one of my cyber stalkers published lyrics to a band on our lineup attempting to gin up controversy. It worked. A few days later, I was heavily edited when I appeared in a Fox News article about rock band, Aiden’s song lyrics. Naturally, I knew they’d edit out my “I understand that you’re confused, after all there are no atheists in Fox News” (paraphrase).

But they completely misrepresented the entirety of my statements. The most appalling unethical journalism I’ve ever been a victim of, and it generated a *lot* of death threats, and even atheists claiming that I was out of line. Luckily, I recorded the interview too. I was able to show just exactly how they work. A few sub-reddits picked up my version of the story and people who hate fox news, but perhaps don’t give a shit about atheists saw a reason to support us. As Fort Bragg freaked out over the lyrics to a few songs, chaplains demanded we get banned. Fort Bragg kept trying to get me to sign documents, eventually I did, because they explicitly guaranteed our right to be critical of religion (rather than the opposite as indicated on their first drafts).

Going on the offensive on their turf

We crafted a pretty ridiculous radio commercial to advertise the festival. The radio stations loved it. We were notified of a cheap opportunity to advertise on Rush Limbaugh and Sean Hannity with *THIS*:

It actually aired a few times out of the 20 slots we purchased. It got pulled for some ‘unknown’ reason, and we were refunded the balance. So in the end Fox News hatchet job yielded an important series of victories. I don’t regret a thing about wading through that slime pit (multiple times).

Sean Harris is a local pastor who made national news when he launched into a crazy sermon about beating the gay out of your children. Seriously. In response, we organized a moderately successful protest. All of the local media outlets covered it. Frustratingly they fucked the story right up.

I marched right into the church and respectfully asked to interview the pastor, explaining exactly who I was. His team said that he wasn’t doing any interviews. So I told them, “Look… I just talked to all the media. In the interest of a fair fight, he really needs to undo the damage I just did.”

I’m subversive like that. I got a long interview with him that slowly disentegrated into him flailing. He had a hard time explaining why his church had anti-LGBT legislation posters everwhere – even in the urinals. The other reporters got Sean Harris’ scripted responses filled with half-truths and other deceptions.

This was just *classic* slime pit.

I noticed that the media turned this into a story about redemption and ‘forgave him’ for hyperbole and rhetoric. Ironically, Pastor Sean Harris told the media his sob story about all the death threats he was getting. That’s why threatening language always works against you – so don’t do it.

Pastor Harris was also given a free pass because the second round of journalists  simply hadn’t done their research. It was technically true that their teachers don’t beat kids at his school. They actually force *parents* to come in and beat their own kids. Their own policies state that several arbitrary things can get you beaten, (with a weapon as per the short video above). 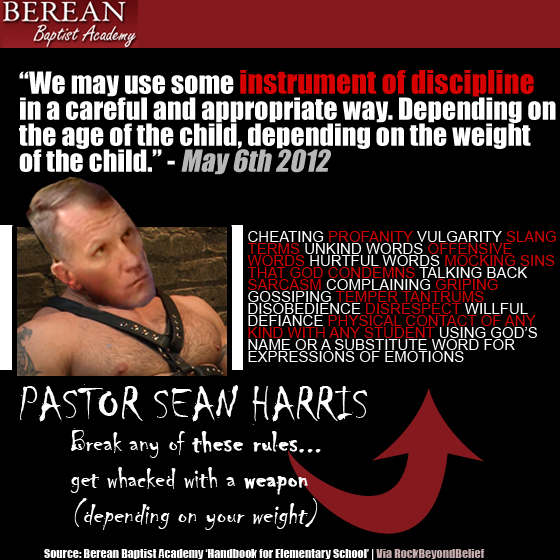 So going into a slime pit is sometimes a chance to be subversive, and then turn it into a 1-2 combo with an aggressive social media (or other) campaign. They would beat 1st graders for temper tantrums – with weapons!

Fellow atheist service members come to me with various links to units that post alarming things, with official command endorsement implied (sometimes explicitly stated). They are breaking all sorts of rules, but they generally don’t realize it. The foxhole atheist community is typically a sheltered bunch that aren’t even aware of each other’s existence. There is a real culture of shame and fear stopping most people from speaking out (or even admitting they are atheists).

When a Fort Bragg unit posted about giving preferential treatment to religious soldiers (they moved this goal post quite thoroughly, and settled on claiming they were only providing for spouses all along.) I approached calmly the first time. I was shot down by some snippy administrator, and banned. So I turned on the fire hose. I invited the public to leave a polite comment (seriously, calm dialog.)

They couldn’t ban us fast enough.

I had to turn on the fire hose a few times to fix it. The snippy administrator relented, and probably caught some flack over his emotional outbursts. They finally removed all appearance of command endorsement, and any question that soldiers were allowed to skip out of work and force non-christians to pick up their workload. So, mission accomplished.

A few months back on Mother’s Day, the Fort Jackson Facebook page posted some superfail. They claimed “military mothers are proof that God blesses the USA” (or something to that effect).

Hours after I turned on the fire hose, they replaced the offending picture/message with “Happy Mothers Day” and a picture of flowers. They chose ‘the easy way’, and I commend them.

If you are a fellow service member and you see an official Facebook post that gives you this reaction:

Contact me. I’ll bring the fire hose if I have to.

—In the interest of not inviting slime, comments are off. I don’t know how to moderate blogs efficiently yet.—

I’m not trying to suggest that any of the statements above justify the existence of any of the Slime Pits that generate threats towards us. I’m also not suggesting that interacting with slime pits is always useful.

I didn’t mean to make it look like I was endorsing slime just because I interact with them. It just came natural, because I wade through seas of slime and tell others what I’ve discovered on a regular basis. Previously, I didn’t think that just because others said nasty things on my blog that it somehow meant that I agreed with the nasty things (as I shouted them down). This is because I’m new to comment moderation, especially in a group setting. I see the slimers regularly interacting all over other FtB blogs, and thought I was just doing the same thing my peers were doing – arguing with them. I’d like to talk to PZ, because *this* rookie  wants to know how they do it, and how to do it in a responsible way. Learning curves and misunderstandings… I swear that’s all this is.