Why the US Military’s suicide statistics are dead wrong

Why the US Military’s suicide statistics are dead wrong July 24, 2012 Justin Griffith

I’ve seen way too many people regurgitate flawed stats regarding suicide rates in the US Military. It seems that the DoD and / or defense-policy think-tanks have created some palatable ‘synthetic data’.

Going back to the 2001-2008 time period, this study seems to be a typical example. It’s from RAND, a large think-tank currently funded by the US Government and private endowments. Their biggest claim to fame is the ‘mutually assured destruction‘ nuclear weapon strategy of the Cold War era. Even they dismissed the DoD’s attempts at ‘adjusting the numbers’ outright because the DoD’s “methods weren’t transparent”. But are RAND’s any better? No.

What Is the Suicide Rate in Military Services?

Suicide rates are typically reported in number of cases per 100,000 people. Figure S.1 shows the suicide rate among active-duty personnel for each military service and for DoD overall and reflects the published rate among active-duty military through 2008. It shows that, in 2008, the U.S. Marine Corps (USMC) and the U.S. Army have the highest rates (19.5 and 18.5, respectively), and the Air Force and the Navy have the lowest rates (12.1 and 11.6, respectively).

The figure also indicates that the suicide rate across DoD has been climbing, rising from 10.3 in 2001 to 15.8 in 2008, which represents about a 50-percent increase. 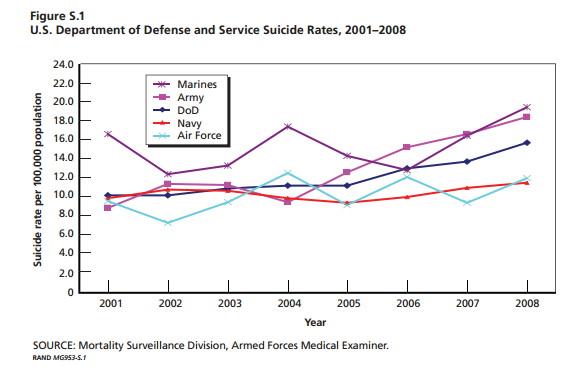 How Does the Military Suicide Rate Compare with That of the U.S. Population?

The military’s suicide rate was much higher than the civilian rate. This indicates that by 2008, there was a real epidemic and an undeniably high suicide rate.

So, are we done?… No. Watch how this dance works.

But these populations are not necessarily comparable, because the military and the national population differ so much in terms of age, sex, and racial makeup and, in part, because the procedures for reporting suicide data also vary, both between states and regions and between the nation and DoD. To derive a comparable population, RAND researchers calculated an adjusted suicide rate for a synthetic national population having the same demographic profile as DoD personnel and as each service. Figure S.2 shows the results of comparing DoD with the comparable segment of the U.S. population for the years 2001–2006. 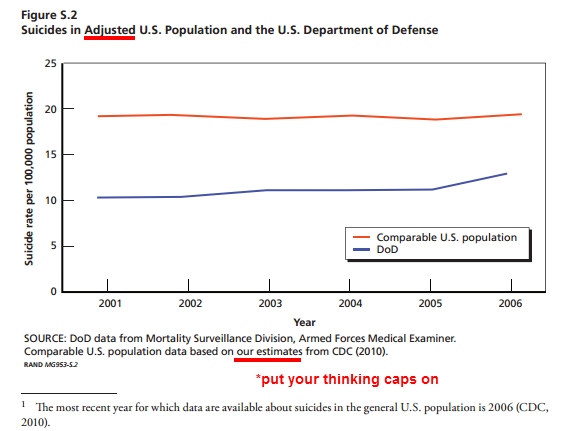 It’s not particularly stupid to suggest that more males = more suicides. I’ll buy that much. However, the DoD has much fewer elderly has fewer non-hispanic whites. So racial and age demographics for suicide should work opposite those for gender, according to the CDC.

Is that what we see in this RAND study? Well… yes.

A total count was calculated by extracting personnel data from September of each year on the individual’s service, component, race, ethnicity, sex, and age. Weighted tabulations were produced by year for sex, race or ethnic category, age group, and service using a weighting scheme designed to replicate the denominator used by DoD.

But does that mean their adjustment is accurate, and accounts for factors that might make the adjusted number less palatable to commanders / the public? NO.

The study identifies several factors that they admit not adjusting for. These factors would significantly alter the formula!

Where the study went dead wrong

Before entering the military you are screened for several things that would bar you from enlistment:

Mental illness – Bipolar, Schizophrenia, and many other disorders are a bar to enlistment.

Depression is the most common psychiatric condition associated with suicide. According to the RAND study: “However, it is believed that only 4 percent of persons with depressive disorders will die by suicide—much higher than a rate of 0.01 percent in the general population but still a risk factor with limited predictive power (Goldsmith et al., 2002).”

Prescriptions – They check to see if you’ve been prescribed anti-psychotics, and other drugs.

Eric Harris, Columbine Highschool Massacre shooter was denied entry into the United States Marine Corps when it was discovered he was on an anti-depressant.

Learning Disorders – Score too poorly on some of the sections of the ASVAB (and other tests), and you’ll be denied entry.

“Researchers propose that problem-solving deficits can both create stress and impede a person’s ability to cope with stressful situations, which, in turn, may lead to suicide (Wenzel, Brown, and Beck, 2009).”

“Across cohort studies, there are more deaths by suicide than would be expected among persons with alcohol- or opioid-use disorders, intravenous drug users, those who use multiple psychoactive substances, and those who drink heavily. The magnitude of increased risk ranges from threefold (among heavy drinkers) to 17-fold (among those who use multiple drugs) (Wilcox, Conner, and Caine, 2004).”

Graduate boot camp – These initial weeks are grueling and serve as an ultimate stress test for a typical civilian.

Many people wash out during boot camp and return to civilian life in what’s called ‘Entry Level Separation’.

Historically, money was a leading contributing factor to espionage / spying. Typically a foreign agency sought out people with large amounts of debt, and solicited them for national security compromises in exchange for money. Though more recently cultural, religious, or other ideological factors have surpassed money as the leading factor (SEE G-2? I pay attention!) Large amounts of debt, and other bad financial historical data can severely limit your options, if not outright ban you from military service altogether.

It’s no secret that financial obligations are a leading factor in suicide ideation. According to Air Force publication, AF PAM 44-160 “Of the entire constellation of risk factors, problems with relationships, the law, and finances played a part in an overwhelming majority of suicides.” (page 8)

Criminal history – Serious crimes are always permanent barriers to enlistment, while many lesser crimes may have been (or still are) ‘waiverable’.

I joke around with my fellow soldiers “We’re the best of the worst. Fucked up enough to not go to college (therefore not becoming an officer). But at least we didn’t get arrested.”

Once again AF PAM 44-166 mentions that problems with the law that happen within the a person’s military career are big factors in suicidal behavior. Now take that concept and apply it to the ‘gatekeeper’ that bars so many applicants from entry in the first place. We should theoretically have fewer suicides!

None of the above factors are considered for the ‘adjusted national average’ that RAND came up with! I doubt it’s even possible for most of these factors. Therefore, the very notion that a ‘synthetic population’ similar to the DoD can even be indexed is ludicrous.

Clearly, several suicide risks are mitigated before recruits even become service members. Furthermore, most of those factors are continuously monitored during a person’s career. When the rate jumps this high, somethings very wrong.

Stop throwing good money after bad! Service members are dying at increasing rates. We need real change now. Instead of wasting $125 million on Spiritual Fitness in 2009, they should have spent it on policy, medical, or any other type of improvements.

Lastly, I noticed an interesting ‘fact’ on the CDC’s list of risk factors for suicide. Cultural / religious beliefs are listed as both a risk factor and a protective factor for suicide. It’s like what ‘they’ say about salt. First they tell you it’s good for you, then it’s bad for you, then it’s good for you again. Then you wind up not knowing who to believe, and eventually you become a dangerous salt-militant.

July 22, 2012
Navy veteran sacrificed his life to save another in Aurora
Next Post

July 28, 2012 Military funds marriage seminar by Pentecostal fans of Newt Gingrich
Recent Comments
14 Comments | Leave a Comment
Browse Our Archives
get the latest from
Nonreligious
Sign up for our newsletter
POPULAR AT PATHEOS Nonreligious
1