I made this in the hopes that it can be useful for removing that smug Christian privilege we occasionally see in the military. 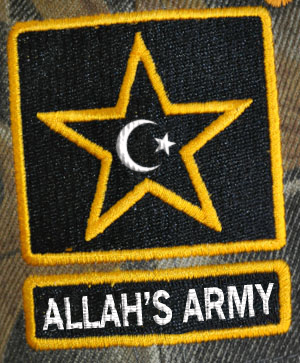 “You’re so right. There are no atheists in foxholes. There are only good little Muslims.”

It’s not ‘islamophobic’. Rather, it plays off the target’s standard xenophobia. The same xenophobia that causes them to say stupid shit about atheists in the first place. This foxhole atheist proudly serves with brave Christians, Buddhists, Wiccans, and Muslims alike.

The Christian majority in the military breeds a similar interpersonal dynamic to the civilian world. The majority generally keep it to themselves, but tend not to correct the vocal minority who get out of line. That’s where you come in, brothers and sisters.

Here is some extremely relevant copypasta from an earlier post, below the fold:

Your Christian Privilege is showing, sir.

A very high-ranking chaplain once told me that he was all-inclusive because he didn’t say “In Jesus Name” during his invocations. I told him that was his Christian privilege showing, and he was taken aback. I asked him if he’d ever seen any soldiers turn to face towards Mecca. He had not. The chaplain paused, then offered that he wouldn’t stop them. How kind of a concession! Would he wait for them to pull out their smart phones to attempt to face the correct direction? (and is that through the Earth?)

Then I ‘explained’ that perhaps my ‘atheist version of prayer’ is to scream really loud, mostly in swear words. Then the chaplain smiled and said “Oh, I see what you mean.”

All versions of prayer need to be opt-in. I shouldn’t have to stand up and bow my head every time someone retires or gets promoted (I refuse to bow, but I have to stand). Religion has no place in a change of command ceremony, nor a change of responsibility.

Why is it even there? “In Jesus name, you are the commander of 44th BCT!”…? We’re working on it. It’s going to take some time, but we will fix this.

July 28, 2012
Another military base hires civilians to proselytize to children
Next Post