Tampons and size 20 panties in the Marine Corps

Have you been the victim of the “Size 20 panties Marine Corps” copypasta? Well, one of the service members in the American Atheists Military facebook group has an amazing reply.

The premise is that some male Marine opened a care package down-range. It was packed with feminine objects. He joked around with his fellow Marines using the various items. However, it turns out that those tampons were about to become really important in a life or death situation. The original spam concludes with a blisteringly stupid anecdote that seems to miss the point of its own story.

Len Blakely compiled the reply. It’s a snopes-worthy treatment with plenty of research, experience, and visual aids. The conclusion is undeniable and simply must be read! Skip to it if you must.

Please feel free to use it on forums / social networking / email chains. This is long, so I’m going to hide most of it under the fold. It’s definitely worth the read, though.

–From my aunt, my response below with thanks for the yellow ribbon campaign logo–

Please read the whole thing….You’ll love it!  Be reminded that “God Works in Mysterious Ways“

Tampons to the rescue in Iraq !! Don’t worry, it’s a good story, and worth reading. It’s even humorous in parts. It’s from the mother of a Marine in Iraq.

My son told me how wonderful the care packages we had sent them from the ladies auxiliary were and wanted me to tell everyone thank you.

He said that one guy we’ll call Marine X, got a female care package and everyone was giving him a hard time. My son said, ‘Marine X got some really nice smelling lotion and everyone really likes it, so every time he goes to sleep they steal it from him. ‘I told my son I was really sorry about the mistake, and if he wanted I would send Marine X another package. He told me not to worry about Marine X, because every time I send something to him, he shares it with Marine X.

He said when my husband and I sent the last care package, Marine X came over to his cot picked up the box, started fishing through it, and said, ‘What’d we get this time?’

But my son said they had the most fun with Marine X’s package. He said he wasn’t sure who it was supposed to go to, but the panties were size 20, and he said one of the guys got on top of the Humvee and jumped off with the panties over his head and yelled, ‘Look at me, I’m an Airborne Ranger!!!!’

One of the guys attached the panties to an antenna and it blew in the wind like a windsock. He said it entertained them for quite awhile. Then of course…….they had those tampons. When he brought this up, my imagination just went running, but he continued.

My son said they had to go on a mission and Marine X wanted the Chap-Stick and lotion for the trip. He grabbed a bunch of the items from his care package and got in the Humvee. As luck would have it, he grabbed the tampons too, and my son said everyone was teasing him about ‘not forgetting his feminine hygiene products.’

He said things went well for a while, then the convoy was ambushed and a Marine was shot. He said the wound was pretty clean, but it was deep. He said they were administering first aid but couldn’t get the bleeding to slow down, and someone said, ‘Hey! Use Marine X’s tampons!’ My son said they put the tampon in the wound. At this point my son profoundly told me, ‘Mom, did you know that tampons expand?’ (‘Well….yeah!’)

They successfully slowed the bleeding until the guy got better medical attention. When they went to check on him later, the surgeon told them, ‘You guys saved his life. If you hadn’t stopped that bleeding he would have bled to death.’ My Son said, ‘Mom, the tampons sent by the Marine Moms by mistake saved a Marine’s life.’

At this point I asked him, ‘Well, what did you do with the rest of the tampons?’

He said, ‘Oh, we divided them up and we all have them in our flak jackets, and I kept two for our first aid kit.’

I am absolutely amazed by the ingenuity of our Marines. I can’t believe that something that started out as a mistake then turned into a joke, ended up saving someone’s life. My sister said she doesn’t believe in mistakes. She believes God had a plan all along. She believes that ‘female care package’ was sent to Marine X to save our Marine.

Either way, our efforts have boosted the morale of many Marines, provided much needed items for our troops, AND saved the life of a Marine! God bless every one of you for your efforts and hard work, and God bless our Marines, Army, Navy, Air Force and all our military service personnel.

Prayer for our soldiers.

Prayer: ‘Lord, hold our troops in your loving hands. Protect them as they protect us..Bless them and their families for the selfless acts they perform for us in our time of need. In Jesus’ name, Amen.’

Prayer Request: When you receive this, please stop for a moment and say a prayer for our troops around the world.

[Len Blakely’s amazing reply is below the fold]

Tampons are sterile and absorbant and make fine dressings. They have been improvised into service for gunshot and penetrating wounds as far back as Vietnam that I am aware of. The absorbent material in sanitary napkins was actually originally developed from material used to treat gunshot wounds.

Here are what soldiers are issued in their first aid kits these days. I carried at least 2-3 each of field dressings, 2 Quikclot, 2-3 Israeli bandages, 2 Combat Application Tourniquets, 2 pairs of rubber gloves as well as a few other useful items like a tensor, 2 1-way valve mask shields, medical scissors tape, casualty identifiers, glow-sticks and some gauze in my first aid kit when I was overseas. For first aid purposes I was just a standard combat first aider, not trained basic trauma life support, or tactical combat casualty care. So what I had was a bit more than what every soldier in my troop had, almost twice the authorized scale. Mind you the people authorizing the scale of issue for first aid kits didn’t get shot at a lot from what I hear so we got ourselves some extra.

Field Dressing.  Most armies have been using something pretty much like this since before the first world war. Harold S Eastman would have had one used on his wounds.

The packaging it comes in can be used as an improvised Asherman seal for penetrating chest wounds.

Israeli dressing. Very useful for applying pressure to wounds and securing additional dressings to a wound.

Combat Tourniquet: These prevent bleeding out from wounds to the limbs, and is also very effective. The Afghan army uses an improvised version of these. Many drivers espescially in armoured vehicles wear them loosely on their legs all the time in Afghanistan, so that they can be applied quickly if their vehicle takes a hit and they are stuck in it.

Quikclot is amazing. When it comes in contact with water (or blood) it absorbs all the water and forms a clot using an exothermic reaction. It has saved hundreds of lives, one of my friends among them. (More info)

***TRIGGER WARNING: this shows a pig being cut and then the quikclot being applied to stop the bleeding and save its life. This test was done to both assess its efficacy and to teach service members how to save each other’s lives.***

This is additional equipment in a tactical casualty care leg bag. This is not what a medic would carry. This is what a first aider with the 2nd level of skill would carry.  In my unit about 15-20% of the soldiers had this training. The number was low as we were not expected to need it as much as the Infantry, where a minimum of 1 in 3 having the training and 1 in 4 having the kit was normal.

Here’s a great example of a custom kit for the battlefield, with many great photos. Below is what a typical extended kit may look like. 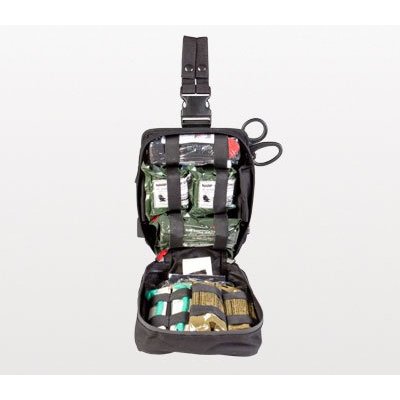 Medics carry much more than this, many times more, and there is 1 medic to about 30-40 troops.

With that being said…

I cannot say for certain that this story is not true. However I would be very surprised indeed that a convoy of soldiers (about a platoon) between them with their high level of skill, training and experience, fully equipped for combat would be unable to stop a wound from bleeding using anything at their disposal except a tampon. If such a case did happen it is almost certain that the tampon was carried intentionally by troops as a supplement to issued first aid kits.

Of all the gifts you could send a deployed soldier I’m sure most would rather get an actual care package than a prayer. 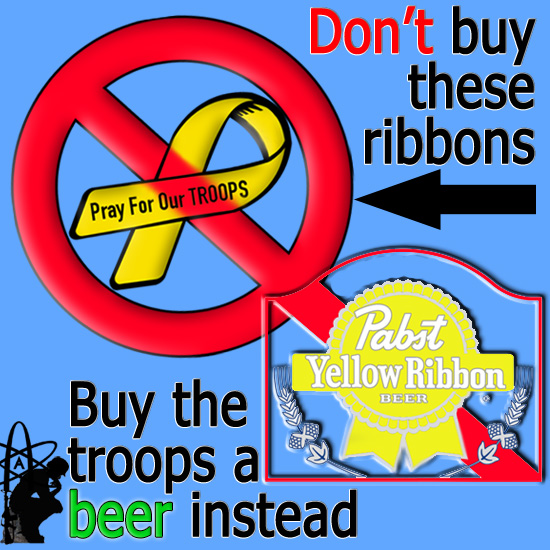 Sarah A. just lamented: “I’m also curious how a “size 20″ female would even be in the marines also, panties aren’t sized that way. But I guess throwing in a sexist fat girl joke was a necessary part of the narrow minded equation.”

July 30, 2012 Christian TV puppeteer arrested for plot to eat children
Recent Comments
13 Comments | Leave a Comment
Browse Our Archives
get the latest from
Nonreligious
Sign up for our newsletter
POPULAR AT PATHEOS Nonreligious
1

“First Moments in Heaven” — When...
Godzooks: The Faith in Facts Blog
Related posts from Rock Beyond Belief