Arthur C. Clarke was one of my favorite authors growing up. I never read his war-themed ‘Glide Path’, but I was aware that he had served in WWII. I had no idea that he rebelled against the RAF’s liberal application of the “Church of England” on its service members.

Clarke demanded that the RAF reprint his dog tags with ‘pantheist’ instead of ‘Church of England’. He said that organized religion was basically antithetical to the scientific method. Personally, I don’t see how ‘pantheist’ escapes that valid criticism. If the universe is god… why not just use the word we already have? You know, ‘universe’.

*Thanks, Shawn W. for uploading this!*

The U.S. Military has a very serious problem with accurately annotating non-believers’ official records for religious preference as ‘atheist’. (Note for service members: you can fix your official records in five minutes!) Clarke’s little victory with his pantheist dog tags is a touching story.

‘Pantheist’ makes sense when you consider how things play out in books like Childhood’s End. All the children of the Earth suddenly stop moving. Eventually, they ‘ascend’ to the next level of being – pure energy – taking everyone and everything with them. It’s viewed as a positive thing in the book.

Perhaps the best example I can think of is in the final book of the breathtaking Rama series, Rama Revealed. An advanced alien civilization catalogs and interacts with countless species – including humans, now. They claim to be reporting back their findings to a relay station – that transmits directly to god. A scientist among the humans interrogates their friendly robotic handler on the subject. He confirms that there are many of these relay stations in the universe, in every galaxy at least one. Other universes were suspected to exist, each with a set of relay stations reporting back to god.

The robot then claims that the god relays had been there since the beginning of the universe, and no creature built them. The motive for doing this, as memory serves, is for the creator to expirement – allegedly wanting to create a universe where all living creatures act in harmony and love towards each other and their creator. It seemed everyone was an occupant of a failed  divine experiment.

The scientific method won out, at the end of this dialog. Despite being devoutly religious and eager to hear ‘factual’ reinforcement of his belief in a god… the man was a scientist.

He asked the robot, “Is it possible that you have simply been programmed to tell us this god-story by the Ramans?”

The robot affirmed that it was entirely possible. Perhaps the advanced aliens decided that humans ‘need’ to hear a god story. Maybe that would dissuade them from acting violently towards other entry-level space-faring alien cultures (or perhaps blow-up their only home world). 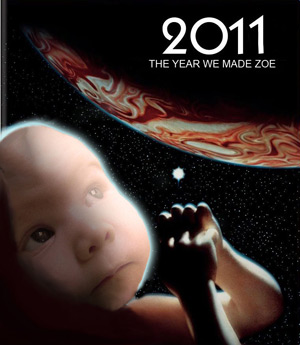 I made that a while back. My daughter, Zoe, is bigger and more beautiful than ever.

August 13, 2012
Doomsday prophet admits to buying influence at Marine Corps base
Next Post