In the US, Christians will soon be publicly executed!

In the US, Christians will soon be publicly executed! September 3, 2012 Justin Griffith

Oh yes you poor atheists are so shunned and you never

Get your way. Baloney you get your way way too much

You get to complain about a cross in MY yard like it hurts you though I guess it does. You had prayer taken our of school. And if a kid brings a Bible to school to read in their quiet time it’s taken away and the kid punished. Oh! Now we see who is truly oppressed Christians are. And it’s getting worse everyday. Do you truly believe in religious freedom? If you do you should know us Christians are under orders from Christ to go and tell others the Gosple, and by asking us not to you infringe on our religious freedom AND freedom of speech. There will come a day when even in the US that Christians will be publicly exicuted. Hopefully you will remember this then. You are like a child that plugs up his ears to keep from being told the truth lalalalalalalalalala, so immature. 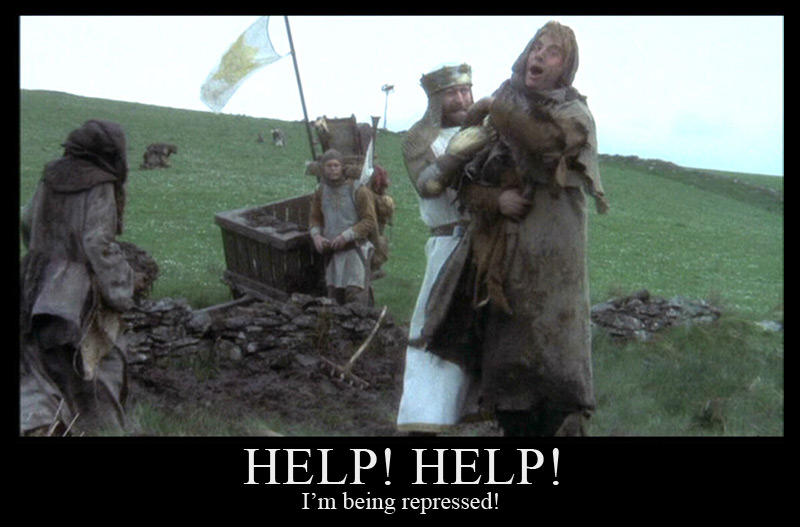 At least the guy in this classic Monty Python scene was being moderately shaken for five seconds. That’s measurable repression, I suppose. It even makes a great photo-op. The peasant was undeniably repressed by his government. Laughably mild repression. ‘Yourmomma’ is absolutely sure about an upcoming slaughter of Christians. That does not count as repression at all, not even in the ridiculous Monty Python sense.

Legally speaking, I don’t have a problem with evangelical students converting their little hell-bound buddies (I did it until I reached age 13). If an evangelical adult can’t separate their religion from their profession, then they need to avoid government work. Telling people that your religion is ‘better than others’ or ‘the only truth’ is unacceptable in a pluralistic environment.

Seriously… you need every bit of school time for, well, school. I’m not sure what he was talking about when he said kids get punished for reading a bible during their quiet time. Can somebody provide a link?

September 4, 2012 Military's $3 million anti-suicide nasal spray
Recent Comments
33 Comments | Leave a Comment
Browse Our Archives
get the latest from
Nonreligious
Sign up for our newsletter
POPULAR AT PATHEOS Nonreligious
1