It’s no secret that the military is facing a staggering suicide rate, more than one every day now. The trend was spotted years ago, and was the basis for justifying 2009’s $125 Mil. ‘Spiritual Fitness’ nonsense. Since then, the suicide rate has skyrocketed, as more and more money is being wasted on a religious approach to a mental health problem. 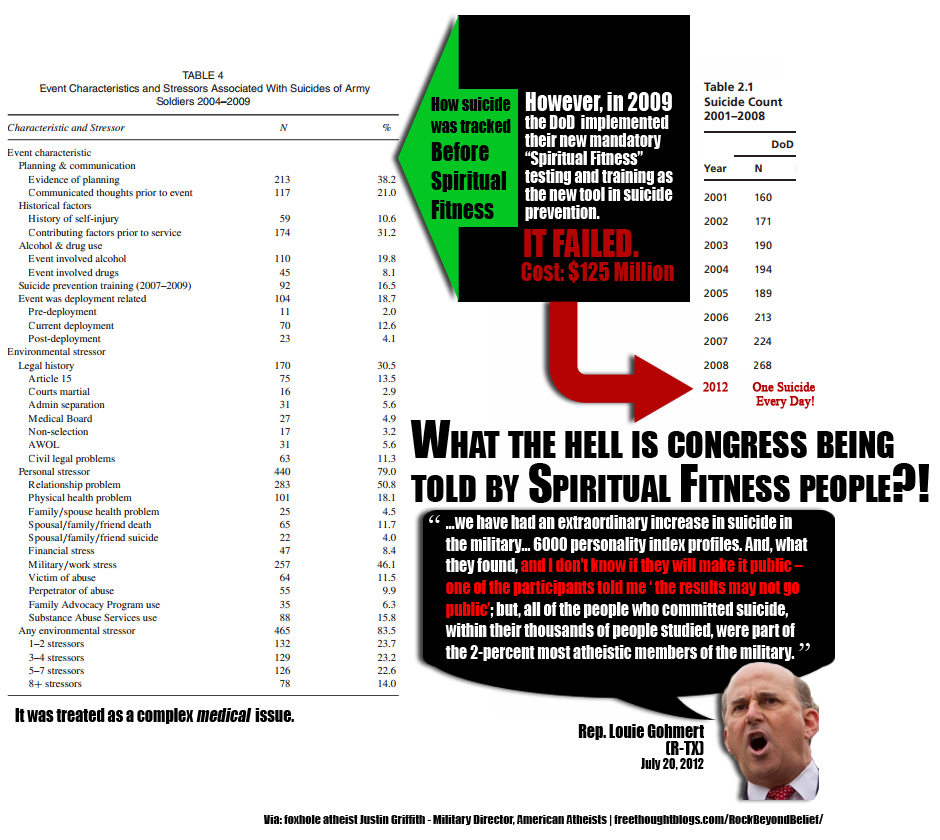 Since I made that info-graphic a few months back, the Army’s data suggests an even bigger increase may be looming. According to Fort Jackson’s Commanding General, the Army tallied 38 suicides for July 2012.

Thursday was entirely dedicated to suicide prevention for my class at the Army Recruiter school in Fort Jackson. This was no 10 minute ‘check the block’ power point ‘class’. This was for real! I’m aware of similar training at other bases. I imagine that many soldiers reading this now have either recently been through it, or are about to. 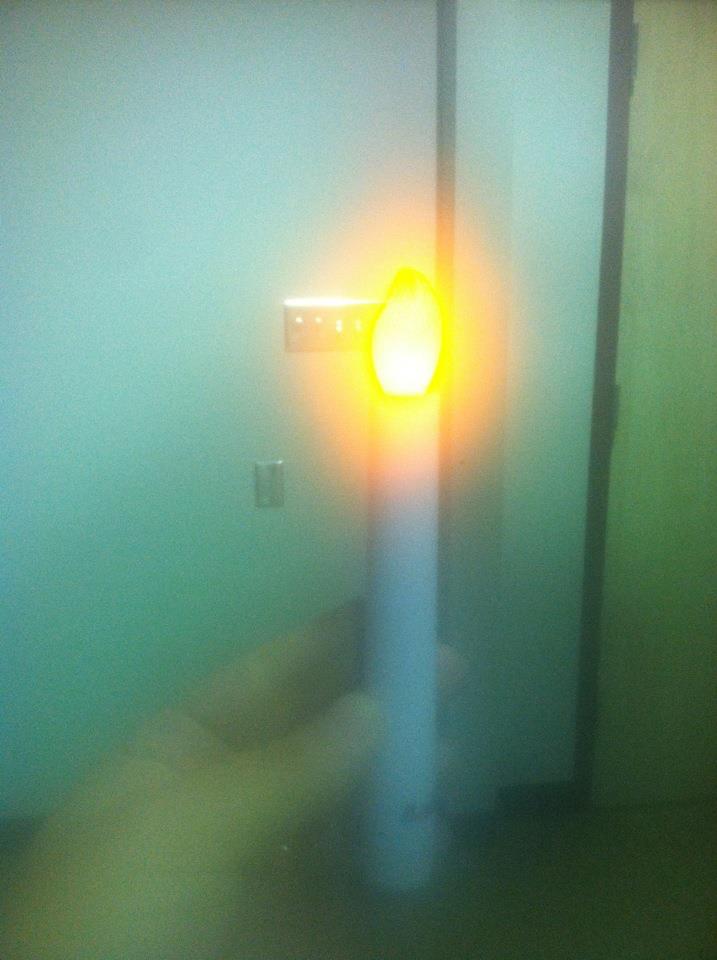 My experience was actually overwhelmingly positive. Not one bit of that terrible Spiritual Fitness training made it into the 6 hours of training that I faced. Unfortunately, I received several reports from other bases that didn’t do the right thing. Look for a shocking story about what happened at Fort Sam Houston on Monday – it will disgust you.

If your suicide prevention training plan includes mandatory candlelight prayers, you are wrong. That picture is very relevant, more to come. If you experienced any mandatory religious training this week, please tell me immediately.

The bright side is, at least at Fort Jackson’s Army Recruiter school, the training was spectacularly on target and crafted with careful attention towards secular / chaplain-neutral advice. This is in contrast to the standard Army advice I usually hear, “send him to the chaplain” as the first (or only) viable option.

Statements from several high-ranking military officials were crafted seemingly just for this day. At the very least, the messages were coordinated recently. I also commend the commanders, especially Brig. Gen. Roberts, for breaking down the troubling numbers in detail. Honest appraisals of the situation help to combat the ‘sweep it under the rug’ attitude of the past.

Gen. Raymond T. Odierno, Chief of Staff of the Army

Score: All of their messages were entirely secular. A+

As far as content, admittedly much of it was drawn from the existing ACE training. Ask Care Escort  (ACE) approach to suicide prevention is direct and useful. I wish I had this training in time, honestly. It’s typically a 50-slide powerpoint presentation with a few videos and vignettes sprinkled throughout. Basically, the instructor makes or breaks it – but I’ll save that assessment for last.

The video content is somewhat dated, but not useless. Other than the Good Charlotte music video (maybe it’s just me), most people appreciated the celebrities that contributed personal testimony and well-wishing from Terry Bradshaw, Gary Sinise, and others. The information at the heart of the training is obviously what’s most important. It was generally informative, but could be improved. For instance, the hands on ‘role playing’ activity planned is very likely to come off as forced, abrupt, and awkward.

The ‘interactive’ scenario questions are fine, but the answers insult our intelligence (the answer is always ‘C’ and the others are depictions of straight up cruel behavior and obviously wrong). A few times, ‘take him to the chaplain’ was suggested without indicating that a person needs to check if that’s even wanted, and at the expense of offering actual medical help! I have no problem with Soldiers seeking chaplain’s assistance in these cases, but it really should be in tandem with medical professionals, regardless of whatever certification / training they receive. It should also be understood that the Chaplain is not a one-size-fits-all solution.

Score: Mostly secular, or chaplain neutral, but could be improved. B+

I hope someone high up in the food chain is reading this. There was one point that was obviously a breakthrough. Our instructor improved upon the suggested ‘role play’ activity. Instead of acting through awkward scripts, he asked the class, “By show of hands – how many have known a person who committed suicide?” Half of us raised our hands.

We were broken into small groups, and encouraged (not forced) to share our stories. Only one person had time to share at our table, and it was a moving story. The real magic was in the reactions on the faces of the people who didn’t know anybody who had committed suicide. It instantly removed the stigma about talking about such things. Suddenly, it was obvious to everyone at the table that there was nothing shameful about admitting or discussing depression or suicide.

There we were staring at our friends and peers from the six weeks of training, mostly through studying and joking around. It was a breakthrough moment, and several people even said so. One person near me said, “I was one of those guys who thought it was ‘bad’ to talk about that stuff… but now I’m like… I wouldn’t look down on somebody at all.” This was an amazing experience. Keep in mind, we’ve all had ‘this’ training 20 times already. This one thing was new and different.

Score: This was the best Suicide Prevention training I’ve seen. A+

September 30, 2012 Military training video on how to perform a 'rocket jump'
Recent Comments
10 Comments | Leave a Comment
Browse Our Archives
get the latest from
Nonreligious
Sign up for our newsletter
POPULAR AT PATHEOS Nonreligious
1