Christian classmate didn’t see discrimination, so the cadet is lying

Atheist West Point cadet Blake Page has recently penned “Why I Don’t Want to be a West Point Graduate“ over at Huffington Post. It’s powerful stuff, and has been picked up all over the place.

Cadet Page’s public stance inspired something amazing. Mikey Weinstein shared this letter with me, and Cadet Page gave me permission to share it.

I really need to share this with you. Something incredible happened tonight at our SSA meeting and I just couldn’t step away from it. First off we had a huge turnout, probably about 25 cadets compared to our usual 10. Also, many of them had told me in the past that they were afraid to speak up and file EO complaints, some were even afraid to give statements to support the one I had already started.

The EO investigator leading this case was at the meeting because she wanted to see what they had to say first hand, and more than a dozen of them said they were inspired to finally come forward, and they did! I watched cadet after cadet go have closed door meetings with the investigator to finally let a person in authority know what sort of things they have experienced.

On top of that I’ve had more people than I can count come up to me to let me know personally that they support what I’m doing. Some of the most rewarding of these conversations were with religious cadets that were tired of being told by their peers and others that they aren’t “Christian enough” or that they aren’t the right type of believer.

It seems like the work we’ve been doing together has finally paid off. You and the MRFF have been an awesome source of support for me and I can’t thank you enough. We’ve finally gotten the conversation started on the national level that’s been so desperately needed for decades. That was exactly what I wanted to see come from this, and I’m honestly close to tearing up from happiness just thinking about it.

Incredible. Others are refusing to stay in the closet. They are demanding justice, and standing tall with Cadet Page.

Predictably, in the wake of such exposure, many people are rushing in to call him a liar. Including a former member of his class Charles Clymer. Citing dubious and unnamed sources, Charles frames the story as if nobody ever had any complaints at the academy and Page is making it up. Charles left years ago due to health issues, but still weighed in as if he’s an expert. He wrote an awful ‘open letter to Blake Page‘ on Facebook, and the general public seemed to take it seriously simply because they saw the two were in the same graduating class.

Charles Clymer’s nasty letter is long, but it boils down to this:

I never, not even once, witnessed, heard about, or even thought it implied that non-religious cadets face discrimination of any kind at the Academy.

So, no… I don’t believe your story for a second, and I’m angry that you’ve managed to insult the institution and everyone in it, lie about your experience, and exploit an important issue (separation of Church and State) for your own long term gain.

Please stick up for Cadet Page and speak out against this character assassination. A lot of (presumably Christian) people were ‘sharing’ and ‘liking’ it before it came to my attention. Blake’s letter from the beginning of this post exposes Clymer’s ‘misunderstandings’. A dozen cadets filed official formal complaints in solidarity with Cadet Page, refusing to let this be swept under the carpet. It’s not just one cadet, Clymer. Apologies are most certainly in order. Please be respectful to Charles and any others as you leave your comments. They are very wrong about the facts, but are not evil.

Most atheists aren’t brave enough or otherwise able to speak out by name in the military – and this is perfectly understandable (truly, that is not meant as an indictment to the torrent of anonymous pleas for help that I receive.) Many atheists don’t even have “ATHEIST” on their official records as their religious preference. Some are unaware that it’s even an option and very easy to fix, but some simply are too worried that it will affect their careers to be out of the closet.

The support of Mikey Weinstein, President of the Military Religious Freedom Foundation, has been instrumental. Just in case you’re looking for a place to donate. 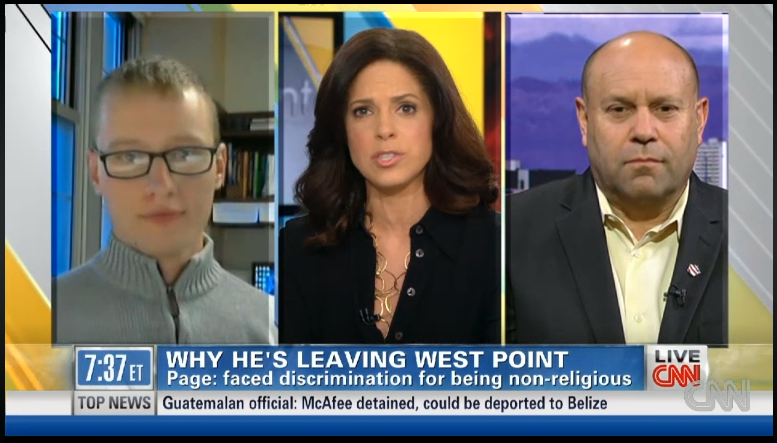