their smiles were contagious, their laughter filled the air.

they could hardly believe all the beauty they saw there.

they were filled with such joy, they didn’t know what to say.

they remembered nothing of what had happened earlier that day.

“where are we?” asked a little girl, as quiet as a mouse.

“this is heaven.” declared a small boy. “we’re spending Christmas at God’s house.” 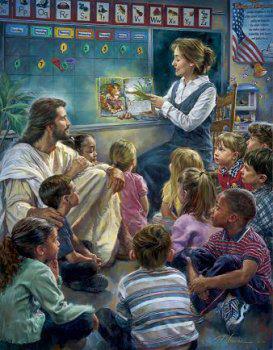 when what to their wondering eyes did appear,

but Jesus, their savior, the children gathered near.

He looked at them and smiled, and they smiled just the same.

then He opened His arms and He called them by name.

and in that moment was joy, that only heaven can bring

those children all flew into the arms of their King

and as they lingered in the warmth of His embrace,

one small girl turned and looked at Jesus’ face.

and as if He could read all the questions she had

He gently whispered to her, “I’ll take care of mom and dad.”

then He looked down on earth, the world far below

He saw all of the hurt, the sorrow, and woe

then He closed His eyes and He outstretched His hand,

“Let My power and presence re-enter this land!”

“may this country be delivered from the hands of fools”

then He and the children stood up without a sound.

“come now my children, let me show you around.”

excitement filled the space, some skipped and some ran.

all displaying enthusiasm that only a small child can.

and i heard Him proclaim as He walked out of sight,

“in the midst of this darkness, I AM STILL THE LIGHT.”

My image is intended to be a reply. Personally, I tend to avoid a strike-first attitude with religious belief. Not much can hold me back from responding when attacked, though.

when 20 beautiful kids met a man filled with hate.

their smiles were contagious, their laughter filled the air.

their parents now cling to all the memories they share.

then people used the tragedy to their own selfish ends,

making their points about guns, atheists, and sins.

pundits and pulpits steered the talk in many a’house.

their fans shocked us all with just a click o’ the mouse.

Some Christians don’t realize that they’re in the wrong,

I wish they would stop to think hard, and think long.

Despite what they think, it wasn’t about Jesus.

Capitalizing on it like this should be beneath us.

Let the parents grieve and leave them alone,

Let the nation grieve, don’t make this your own,

it’s not a soapbox for your next long-winded rant,

filled with the grammar you’d expect from a plant.

Stop saying these poor children are now with your god,

You’re applying your views and your logic is flawed.

Surely you realize that for some of the dead,

Their families had different thoughts in their head.

It’s highly offensive when you keep carrying on,

About people who can’t speak up after they’re gone.

Think about what it says in your good book,

Dust it off, take it out, have a good look.

It proclaims that for kids who didn’t know Jesus,

They’re burning right now, in hell, beneath us.

You’re mulling that over, quite a terrible thought.

All of us were heartbroken when those kids were shot.

It’s arrogant to think you are alone with that pressure.

When you say that your god belongs in the schools,

It appears that you think some parents are fools.

To one of those beautiful kids that just died.

Before you bring up god, reflect and research,

Why does your god allow shootings in church?

but chances are about one in four,

that people in Newtown aren’t even christian.

call off your hunt, and end your mission.

Update: Some people prefer to post both versions of the poem, along with the old image (or simply as a text-only status update). Whatever your take, please do respond to this nasty poem as it pops up.

Update 2: Some Christians are claiming that ‘their bible’ doesn’t say non-Christian kids would go to hell. As a former Christian who was quite the bible-thumper as a child, I disagree. And so does the Catholic church. And so did Martin Luther, who inspired basically all modern protestant denominations.

John 3:5 (This is even worse, because you need more than just baptism)

Jesus answered, “Truly, truly, I say to you, unless one is born of water and the Spirit, he cannot enter the kingdom of God.

“Man that is born of a woman

is of few days, and full of trouble.

3 And dost thou open thy eyes upon such a one

and bring him[a] into judgment with thee?

4 Who can bring a clean thing out of an unclean?

There is not one.

16 He who believes and is baptized will be saved; but he who does not believe will be condemned.

1 Corinthians 7:14(if at least one parent was a Christian, child is safe)

Acts 16:30-33(one person in the household must be Christian)

30 and brought them out and said, “Men, what must I do to be saved?” 31 And they said, “Believe in the Lord Jesus, and you will be saved, you and your household.” 32 And they spoke the word of the Lord to him and to all that were in his house. 33 And he took them the same hour of the night, and washed their wounds, and he was baptized at once, with all his family.

That’s why the Spanish Inquisition went to such great lengths to kidnap Jewish babies, etc. There are many many more biblical passages that are commonly used by Christians to explain that only through Jesus Christ can one reach heaven (be it baptism for babies, or consecrated belief by proxy, or through professed faith.)