This is really vile. I don’t care what you think about your opponent in an argument.

You never ever do this: 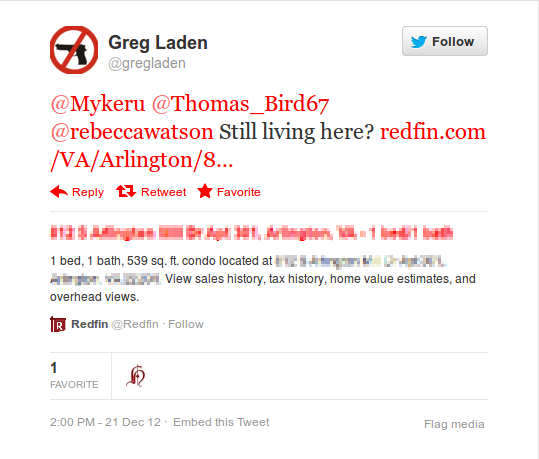 That link contained what he hoped was Mykeru’s home address. Only it wasn’t his home, it was his ex-wife’s home, and that was years ago. Even then, she may not even live there anymore! Some other family may be targeted by whatever plot Laden may have hoped to inspire by dropping dox.

Also included in that link was this actual photograph of the building: 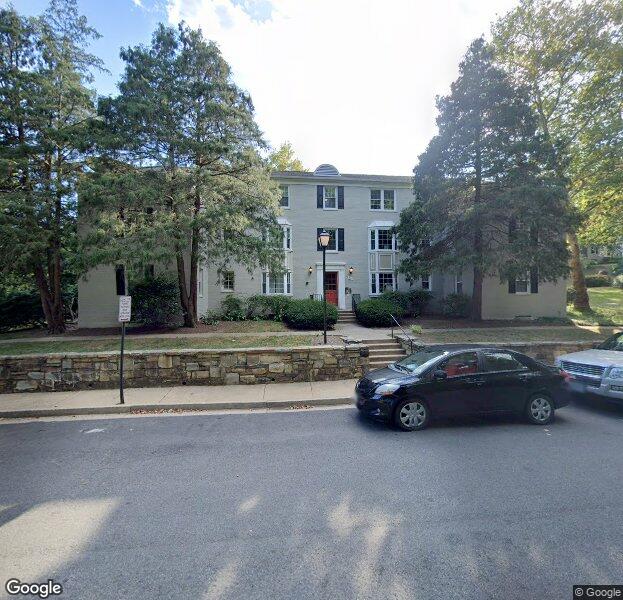 Seriously, WTF!? I don’t know much about ‘Mykeru’, and maybe he’s not a great guy. What could possibly excuse purposely leaking an actual home address of somebody you disagree with? Nothing. This is every kind of wrong.

Laden then went on to disclose Mykeru’s alleged employment information. Presumably, Greg Laden wants his twitter followers to contact Mykeru’s employers and co-workers. You know, right after some visit his (ex-wife’s old) house.

I’ve not linked directly to this information, but it’s too late to remove it from the internet. Coupled with his history of bullying, and his direct threats of violence towards me, we can safely label Laden as a serial-harasser. When he attempted to trigger my PTSD, I saw him for what he was. Initially, I had thought it was just a one-off, and perhaps he just ‘saw red’. This was the first time I did not immediately forward a threat to the FBI. He continued to harass me, encouraging my peers to join in. To their credit, most saw what was happening after a few days.

A week later, he got the word that I was about to publicly release his threats. He called me about an hour before I hit ‘publish’. It was way too late for that. The conversation was absurd and he was extremely self-centered.

I published. He was booted. He wrote something about how I was the bad guy and deserved his violent threats. Then he showed up in my comments section and accused me of lying about that phone call. I think my response convinced him to fuck off, at least temporarily.

Several months passed. I even entertained the notion that he could change, and that if I saw him in person we’d perhaps even pose for a photo to bury the hatchet. On November 26th, Greg Laden re-extended the same violent threat against me that got him kicked off of FtB in the first place.

Even when he’s not harassing people, he’s largely incoherent. He has presented theories about testosterone-damaged chromosomes that don’t even qualify as junk-science. His writing is the laughing stock of reddit.

Obviously, I don’t think he’d win any fair fight. He doesn’t exactly seem to play fair, though, does he? That’s the whole point of purposely ‘dropping dox’ like home addresses: violence and harassment by proxy. It’s inexcusable, just like the violent threats and harassment that come directly from him.

What possible explanation could people have to defend this person’s antics? Hard to say.

Greg made his own home address very easy to discover. He is the only one who could have put that address up where it is, and he clearly makes no effort to hide it. I’m not linking to it, or discussing how to find it. I strongly discourage people from doing anything that allows him to look like a victim. That’s his game.

I seriously doubt that’s his real or current address that he’s making very public. If it is, then he’s doing it on purpose.  [edit: I was way off with the way the way I typed this initially. Maria Maltseva most certainly did not release her own home address. It was dug up and posted by one of Greg Laden’s commenters, I completely misread the situation – All apologies to bluharmony.]

By leaking his own home address is Laden now baiting drama? Hard to say.

His tactics are really creepy when you analyze them. He recently posted this:

… I do not regard physical threats as unimportant. It is just that I am a very large, muscular man with martial arts training who never goes anywhere without my pit bull, and I always carry a gun. I am also famous for kicking ass, generally.

He wants to be quote-mined. He craves having a gotcha moment. He waits for somebody to post that quote without acknowledging his post’s cryptic last sentence. Paraphrased: “Am I kidding? Hard to say.”

FtB did the right thing by kicking Laden to the curb. How he’s still taken seriously anywhere else is beyond me.