No really, THAT was utterly shameful writing.

No really, THAT was utterly shameful writing. December 26, 2012 Justin Griffith

Lousy Canuck has another post with extreme histrionics. It’s so weird because I really liked the beginning. He was describing his awkward upbringing, and I found myself totally relating. Obviously he went down a different path and chose the comic books and video games route. As for me, the Army pretty much saved my life. But I had to stop reading midway through and react.

I stopped at this bit.

I saw Justin Griffith step up to tell everyone that the members of Team Douchebag were just misunderstood, and that they were using 4Chan humour to get lolz — never mind that said lolz were at someone else’s expense, we saw that, we understood the culture and the jokes and the lolz, and that’s what we objected to. If we’re talking about stopping bullies, the focus shouldn’t be on what VICTIMS can do better (including ignoring the “for the lolz” crowd that makes up the majority of these bullies).

I never said that the slimepit was “just misunderstood”.

I never said the 4chan tactics that some of the members use were defensible.

I never said you should just ignore gendered slurs.

What the shit is wrong with you? That post always included those statements. Use your modly powers if you’re suspicious. The only edit I was requested to make was to lower the font size of 4 words: “I support Abbie Smith – I don’t support everything she says or does.”

That was my high crime that generated those threats. It was because Greg Laden only read those four words and then kicked up a shit storm by people who didn’t yet see him for what he was. Stop pretending that I launched some sort of “I luv 4chan and you guise just don’t get teh lulz!” You’re lying. You really are living in that other universe, aren’t you?

It was a naive plea for peace. It didn’t work. Who cares.

On top of all of that, there is absolutely no reason Greg Laden should issue violent threats. I too “won’t be a model victim”. I won’t just “get over it“. 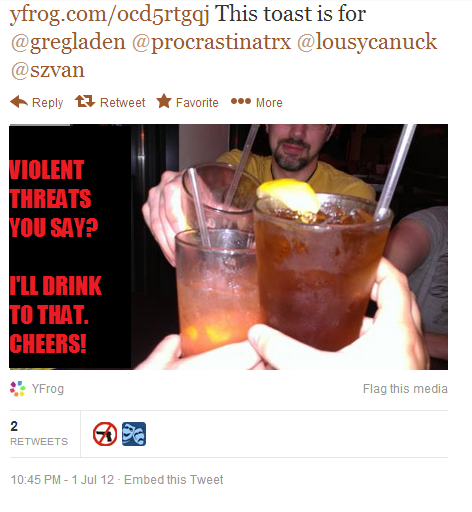 Note: I stomached one further paragraph before going to bed. It referenced Laden’s outright attempts at triggering PTSD. This is incredibly offensive:

And Greg’s “Patton Slap” went over the line in a lot of ways — warning that these people would try to trigger Justin’s PTSD was, in a way, just another trigger, even if Greg didn’t intend it that way, since intention isn’t magic. It’s the same reason you scream “trigger warning” before a post containing these potential triggers — you don’t want to accidentally hurt someone you’re not intending to.

I don’t think I’d have sent that letter. I might have thought about it, I might even have DONE it, but I do try not to say things in anger as much as possible because that anger tends to undercut what you’re trying to do.

Wow… I can’t believe this Patton slap explanation! I mean I can believe it coming from Greg “can’t spell the title of his own book correctly” Laden.

If somebody gets threatened with violence, or has Post Traumatic Stress Disorder, Lousy Canuck thinks it is a good idea to give them a Patton Slap! 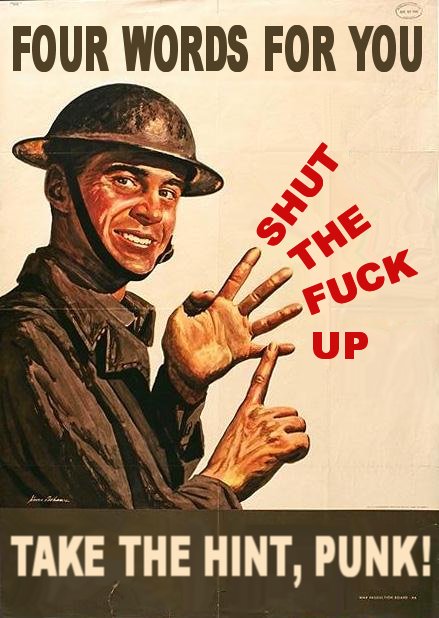 December 26, 2012
I feel so betrayed. That was utterly shameful writing!
Next Post

December 27, 2012 You are not a character worth associating with
Recent Comments
52 Comments | Leave a Comment
Browse Our Archives
get the latest from
Nonreligious
Sign up for our newsletter
POPULAR AT PATHEOS Nonreligious
1