Some of my fellow soldiers have said some pretty unscientific or unrealistic things. A lot of these things are based on sensationalized, hyped, outdated, misread, or otherwise incorrect science. Some of it comes from their own weird minds, but a frightening amount comes from regurgitating science-sounding ‘facts’. 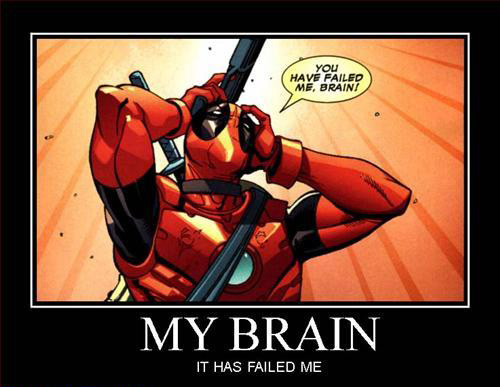 This is often traced back to a vitamin advertisement from the late 19th century. I’ve seen a few other explanations, too. Obviously, we use 100% of the brain. We may not always use it well, but it’s doing something. After a theist ranted about ‘proving god exists mathematically’ I found out that Einstein is commonly added to many myths as they evolve.

“You lose 50% of your body heat off the top of your head when you are cold.”

This myth is often traced back to a faulty military science test. I even had a soldier tell me that it was true, and that the military discovered it. The theory was apparently framed around the concept that ‘heat rises’.

“If you put a pubic hair in the [urinalysis] cup, you pass.”

“My baby is sick and I don’t produce milk, I need a sick donor-mother to give me her breast milk, for the yummy antibiotics.”

I hope this soldier isn’t reading this. She knows I like working with her… but wow this is an awful idea. If anything, you’re risking introducing a new sickness. Also, I knew what she meant, but there is a difference between antibody and antibiotics.

“You could mummify a body with a bag of Doritos.”

I traced this one back to a joke on Slashdot’s article about one of the guys who made Doritos. It popped up on my soldier’s facebook without that humorous context. She said it aloud in a matter of fact way, as if to say, “Hmm. Interesting fact!”

“I’m on a diet that starts with massive calories and junk food and then you slowly ween off over the next few months.”

Burn more calories than you consume. I’m not saying it’s easy to do, and some have an especially hard time at it. However, the ‘science’ part is simple.

“I don’t shave before exercise because shaving makes it grow back twice as fast (or thick).”

This is a ‘private excuse’ for not shaving. The regulations clearly say that males must shave before the duty day begins, which means the first formation (typically 6:30 AM). There may be some sort of effect that a blunt razor cut causes stubble to grow back somewhat more noticeably the next day, but certainly not any faster. Even then I’m dubious. Rather than debunk this myth, I usually just tell them to shave twice, and they just shave the once at the appropriate time.

“When I was in the National Guard, we used to give out tickets to see Noah’s Ark.”

This was actually said by an atheist, just being a little loose with her words. I quickly replied, “You know that’s not a real place, right?” Our supervisor thought I was being disrespectful but laughed too.

To her credit, she was a really good sport about this when I explained to her that she could just put all the money in a single bank account. She is not an idiot, but this was pretty funny. She brought it up often and had a great sense of humor about it.

“Wearing more clothes / covering more skin actually keeps you colder, so I want to wear my long sleeve uniforms for exercises in the summer!”

I wasn’t going to correct this one, but then a few other soldiers standing around piped up in total agreement. I suggested that if they ‘really’ want to ‘keep cool’ in the summer that they might pile on 4 layers of uniforms, or even the burqa we keep for OpFor missions.

This guy said the dumbest things I’ve ever heard, constantly. He wanted to build a tollbooth on a random road, to get rich. I told him he might die trying, but he insisted that his would be made out of steel and the cars wouldn’t harm him. This guy deserves his own post for all of the hilarious things he would say.

One time, he told me that there was a machine that baked all the igneous rocks used to landscape our commander’s building. I told him that it was actually a volcano, but he said, “No, dude, they have a conveyor belt take them out of the lava pit at different temperatures. That’s why they are different colors.”

Here’s a sample from his Facebook, “25 randoms things about me” 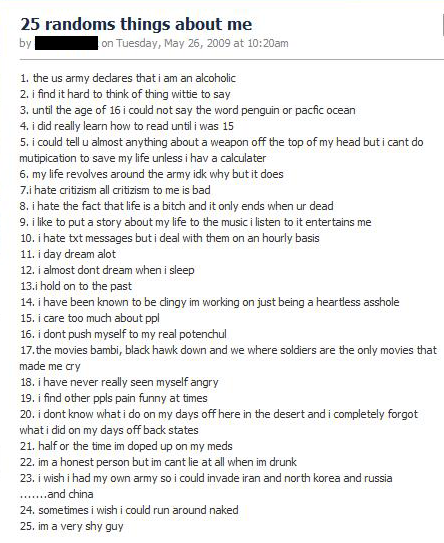 I was standing next to him when the ‘Army says I’m an alcoholic’ thing happened. And it is a pretty funny story…

This soldier was generally known for poor hygiene including wearing nasty uniforms. Our supervisor passed by and took him outside. He came back in saying he just got yelled at for being drunk. He told me that he had spilled liquor on his uniform a few days earlier, and that’s why it smelled. I was sure that he’d just get yelled at for being nasty again. However, he craved attention, and took it to a whole other level.

They took him to the MP station. For some reason, he actually admitted to being drunk on duty, mentioning some girl breaking up with him. He tearfully asked for help in lieu of punishment. They gave him a Breathalyzer and he passed with a 0.00 BAC! Since he had self-identified as drunk on duty and asked for help, the command had no choice but to send him to substance abuse treatment.

Only he could write himself into situations like that every single day. I loved being around him, it was like being in a sit-com, but I was the neighbor stopping by to witness a punchline. I was always nice to him, and even tried to pull him aside for tips on social graces (away from others). I stood up for him when he didn’t instigate whatever situation he was in, but this soldier was simply not passing muster. He got kicked out of the military eventually, and I hope he’s doing alright wherever he is.

What are your favorite science fails from your fellow service members (or co-workers)?

December 30, 2012
Jerry Coyne on changing his mind about Evolutionary Psychology
Next Post

December 31, 2012 Urgent Message From David Silverman
Recent Comments
33 Comments | Leave a Comment
Browse Our Archives
get the latest from
Nonreligious
Sign up for our newsletter
POPULAR AT PATHEOS Nonreligious
1