Talk2Action has picked up the story of the awful ‘Manga Messiah’ comics that are being handed out to deployed soldiers. They’re also used in Uganda to brainwash kids against Jews, gays, and witches. 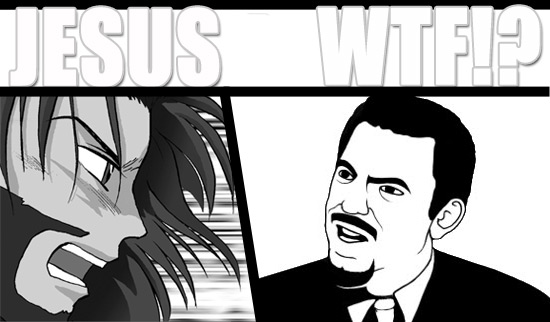 To an almost complete lack of media scrutiny, the Japanese manga-style comic book Manga Messiah seems to have joined Hitler’s Mein Kampf, as one of the most internationally prolific forms of anti-Jewish propaganda in history.

I first wrote about Manga Messiah after receiving my copy while on my last deployment. I was truly shocked when I did more research. I received it as if it was just another chaplain tract, and in fact was bundled with a bunch of standard issue pamphlets. Just how many got distributed? Are they still distributing them in foreign countries?

Bruce Wilson‘s piece at Talk2Action’s is lengthy and well-sourced. I didn’t even pick up on every angle as I read my copy. For instance, Wilson writes about the portrayal of Judas as a ‘gay banker’:

In the Manga Messiah depiction of Judas he is drawn as effeminate, with an early 1980s Boy George-style haircut, a flowing head scarf, and earrings: a heavy handed suggestion that Judas might be gay. So, in the Manga Messiah version of the passion play, Judas is a gay banker or money-manager, and perhaps a violent revolutionary killer (the Sicarii carried out their assassinations with concealed daggers), who betrays Jesus with a homoerotic kiss.

Commenting on the comic, founder of the nationally influential LGBTQ rights group Truth Wins Out Wayne Besen, who is both homosexual and Jewish, stated,

“This is a cartoon with dark connotations that blends historic homophobia and anti-semitism to mold impressionable young minds to think with malice.”While Jesus and his apostles are drawn Manga style, with tiny, stylized noses, and enormous eyes, the Jewish rabbis in the comic often depicted differently – they are shown with sallow, yellowish complexions or with large noses, attacking Jesus and angrily clamoring for his death.

Read the whole thing over at Talk2Action, and share it for great justice!

January 4, 2013
Armor of Light / Camp Pendleton just don't have the muscle
Next Post

January 7, 2013 American Atheists Annouces A $2000 Atheist Activism Award
Recent Comments
8 Comments | Leave a Comment
Browse Our Archives
get the latest from
Nonreligious
Sign up for our newsletter
POPULAR AT PATHEOS Nonreligious
1