We were extremely disappointed that the second ever atheist festival on a military base was recently rejected by Camp Pendleton. They continue to provide massive support to a single religious sect, the controversial Calvary Chapel and its military arm, ‘Armor of Light’ (AoL). Camp Pendleton is a large Marine Corps base near San Diego, California. The area is also home to the 1000+ churches-strong Calvary Chapel headquarters.

The Marine Corps mailed the rejection letter to American Atheists headquarters in New Jersey. Perhaps fittingly, the letter seemed so nonsensical that it had to be rescued from the garbage.

We are pleased to announce that we have now mitigated all of the concerns that Camp Pendleton cited in their rejection letter. 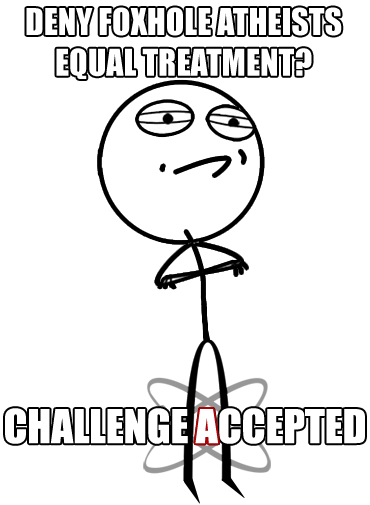 The Rock Beyond Belief site will continue to be updated as the situation develops. We’re not going anywhere. We demand equal treatment, and we’re confident that Camp Pendleton will make the right call.

We had similar stumbling blocks at Fort Bragg, NC. Fortunately, Fort Bragg leadership came around and gave us equal treatment.  Our newest proposal is cordial yet firm where it counts.

YOUR STATED REASONS FOR REJECTION:

3) All-day rally [Unclear if this is a problem.]

1) American Atheists will pay for everything that (Armor of Light) AoL has historically paid for. All we want is the same deal. We don’t expect a ‘free concert’ using appropriated funds. Tell us where to deposit the check.

2) You already have enough manpower. Whatever manpower typically ensures your MCCS events happen should be sufficient. It’s the same as the other sectarian events you continue to host. FOIA indicates that Del Mar Beach staff, and MCCS staff handle much of this work, augmenting Pendleton asset support such as PMO, Legal for approval, and Public Affairs.

3) We are not requesting an ‘all day rally’. We are requesting a concert, not a rally. It will feature some bands and a few speakers in between. We have altered our request to closely mirror AoL’s 2009 MercyMe concert (the only one we received any information on in our first round of FOIA.)

Camp Pendleton is obligated by regulation to be both willing and able to support all sectarian events equally, if they allow any at all. See attached regulations DoD Directive 5410 and JE 3-211 for a small sample of relevant doctrine.

See below for referenced regulations:

Spread the word for great justice!

January 11, 2013 Americans United calls Marine Corps out for discrimination against atheists
Recent Comments
9 Comments | Leave a Comment
Browse Our Archives
get the latest from
Nonreligious
Sign up for our newsletter
POPULAR AT PATHEOS Nonreligious
1