Americans United calls Marine Corps out for discrimination against atheists

“Evasive Action.” It’s more than just a clever play on words by Americans United blogger Simon Brown. It’s also an accurate summary of the situation at California Marine Corps base, Camp Pendleton. They’re putting a tremendous amount of time, personnel, and other government resources to support massive evangelical concerts and other events. This is only legal *if* they promise to provide the same support to all other groups. Camp Pendleton rejected our atheist-themed concert for laughable reasons.

Via – ‘Evasive Action: Is A Marine Base Discriminating Against Atheists?’

…the U.S. Marine base outside San Diego recently denied a request to host the second-ever atheist festival on a military base even though religious groups have been given base access.

Griffith said in a blog post that Camp Pendleton rejected the festival on several grounds, citing: “too expensive,” “too little manpower,” “all-day rally” and “8,000 attendees.”

American Atheists fired back, noting that the group would cover the same portion of the costs as previous groups had, that the event would be a concert with speakers rather than an “all-day rally” and that Camp Pendleton has accommodated events in the past with more than 10,000 attendees.

Curiously, those in charge of the base haven’t shown the same concerns about events put on at Camp Pendleton by Armor of Light, the military wing of the evangelical Christian Calvary Chapel. The California based group, which has been embroiled in child sex abuse scandals, has held events at the base for more than a decade, including a concert for 15,000 people in 2009.

It’s pretty remarkable that this is still happening given that a nearly identical situation came up at Fort Bragg in North Carolina, eventually leading to the first-ever atheist festival held at a military base, thanks to some assistance from Americans United.

Damn right they supported us last time around! We were showered with support from AU leaders such as Ayesha Khan, Rob Boston, and AU President Barry Lynn. Regarding the first festival at Fort Bragg, this part of the article is definitely not a stretch (emphasis mine):

Facing the legal firepower of AU and the ACLU, officials at the fort agreed, and Griffith was able to organize the event, which took place March 31 of last year.

Frankly, just about every major secular organization was ready with drooling lawyers standing by. AU, and others like the FFRF, MRFF, ACLU, stand tall with American Atheists when it comes to the constitutional rights of atheists in the military.

Lastly, thank you, ‘internet atheists’. Thank you for similarly playing such a large role in our struggle for legitimacy. Count yourself as part of the grass-roots effort that broke through the stained-glass ceiling. Petitions, write-in campaigns, and other crowd-sourced activism had a measurable effect. It’s quite likely we’ll be asking for that sort of support once again in the near future. 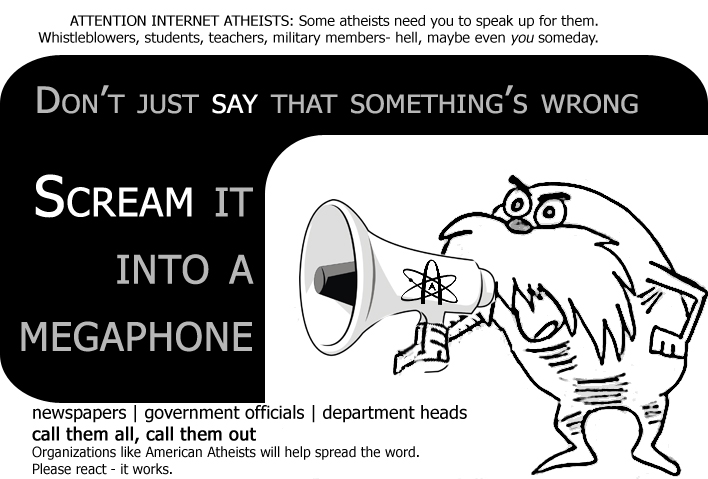 January 12, 2013 Military members, does your PX / BX sell these awful items?
Recent Comments
2 Comments | Leave a Comment
Browse Our Archives
get the latest from
Nonreligious
Sign up for our newsletter
POPULAR AT PATHEOS Nonreligious
1