Carolyn Porco is the leader of the Cassini imaging team. She has discovered a damned Death Star orbiting Saturn. 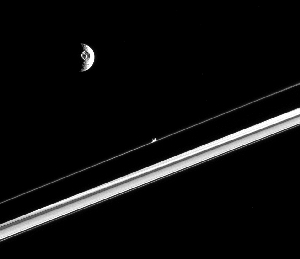 via: Carolyn Porco at CICLIPS

The evil GALACTIC EMPIRE has inserted its Death Star among the moons of a giant ringed world orbiting a middle-aged star. Alarm spreads among the fearful EARTHLINGS on a small nearby planet: what has brought the Empire to this galactic sector, to this Sun?

Intercepting sinister electromagnetic bursts, and suspicious of evil intent, the EARTHLINGS dispatch a spacefaring vehicle with powerful detectors to find out…

I learned about all of this on Twitter. And Carolyn Porco confirmed my suspicions that scientists have ‘space doodoo pistols’.

It started out as a discussion I was having with Rodney Anonymous, vocalist for the legendary Dead Milkmen. Rodney mentioned that he was featured on the same hip-hop album as the ‘Frank Zappa of hip-hop’, Kool Keith (a.k.a. Doctor Octagon, and pioneer with the Ultramagnetic MC’s). I found this extremely interesting.

Kool Keith strikes me as somebody who really is not from this planet. Like Syd Barrett, he composed music in and out of mental institutions. He’s bitter about the ‘college radio’ success of the 1997 Dr. Octagonacologyst album, and lamented that he hated how “only white kids come to the shows now.” Really though, what did he expect? Did he really think that his increasingly strange lyrics would resonate strongly with the community he grew up in?

Equator ex my chance to flex skills on Ampex

More ways to blow blood cells in your face

He’s a straight up space cadet. Mainstream hip-hop had already started regarding ‘gangsta rap’ as a thing of the past by 1997. Even during the peak, it’s hard to imagine those audiences embracing lyrics about being armed with ‘space doodoo pistols’.

It’s fair to say that the Dead Milkmen were always treading water in left-field lyrical territory too. Perhaps it’s not such a big leap to imagine the two performers appearing on the same album (though, on different tracks). Lately, the Dead Milkmen vocalist had surprised me quite a bit. His radio show ‘Rodney Anonymous Tells You How To Live’ shattered my expectations of the type of music he likes. He plays everything from early Brian Eno to Witch House music to rare industrial-dance crossover stuff.

Come Meet the Growing Ranks of...
Roll to Disbelieve
Related posts from Rock Beyond Belief