On The Way to Thor’s Hammer….

An interesting thing happened at the Department of Veterans Affairs (VA) in July (2013), to little fanfare and even less media coverage; the VA approved the addition of the “Hammer of Thor” to their list of symbols allowed to be placed on the tombstones at the grave sites of veterans who are buried in veteran cemeteries.  The newly approved symbol is intended for the practitioners of a form of paganism that worships the Norse pantheon, including Thor, and looks like this: 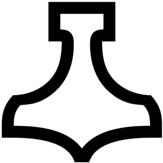 Many Americans would be surprised at the number of symbolic options available to veterans and the list of current symbols allowed on veteran grave sites is surprising long and inclusive.  The list has greatly changed over time; for example, American Atheists successfully led the fight decades ago to have their organizational symbol approved by the VA as a symbol that could be placed on atheists’ stones at military grave sites.  Since then, many various symbols, including more than 18 different version of the Christian cross, have been added over the years, but not without controversy. For example, as recently as 2007, the family of a Wiccan soldier who died in combat were embroiled in a lengthly fight, with the help of the ACLU, to make the VA accept the Pentacle as an authorized symbol.

One of the things that has always annoyed me about the Christian fundamentalist movement is their tendency to misrepresent, or even outright LIE, in order to make their point. For example, look how often atheists, humanists, secularists, and their ilk have been accused of wanting to do things like remove the cross-shaped grave markers from VA cemeteries.  These claims are almost always accompanied by a lovely picture of a green expanse containing white crosses as far as the eye can see, much as you see here: 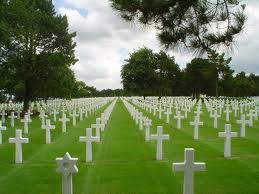 What they almost always fail to mention is that almost all of these cemeteries, with their fields of crosses, are located overseas, in places like France and Belgium, and are therefore not subject to the policies of the VA.  Most VA cemeteries located in the United States and that are subject to VA policy look like this: 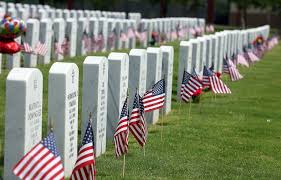 Notice that each grave stone has a place at the top center for the VA approved symbol of their choice, which is as it should be.

While I can’t claim to speak for all atheists/secularists/humanists and such, I can definitively say that this particular atheist applauds the VA for their efforts to make sure all veterans and their families have access to the symbol of their choice, or no symbol at all if that’s what they choose.  While the government should never be involved in endorsing religion, the VA seems to be on the right path to ensure that every veteran’s beliefs get the respect they should.