You’re Supposed to Actually Toss the Grenade Away from Yourself!

You’re Supposed to Actually Toss the Grenade Away from Yourself! August 16, 2013 Paul Loebe

So people have been tossing grenades these last couple weeks. As an experienced grenadier I thought I’d throw a few pointers out there. For starters most people assume the grenade in use today is the old-school pineapple grenade that looks like this: 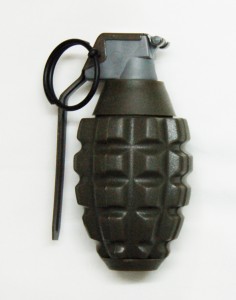 That is incorrect. Before I joined the Marines I also held that false assumption. The military stopped using the pineapple grenade because they found that Soldiers and Marines could actually throw them further if they were shaped like a baseball. The US Military transitioned over to this grenade: 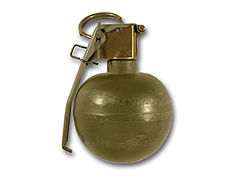 Now that we have that common misconception out of the way we can move on to more important aspects of the “grenade toss”. Now, once you have the grenade you cannot just pull the pin and toss it. You need to be able to throw it accurately and ensure that goes far enough out to hit the intended target, but not too far so as to hit an unintended target thus creating a casualty.

Now, that is the proper execution of a grenade toss performed by a professional. If you fail to follow these simple procedures then this could be the end result:

Fortunately, in the instance of that last video, there was someone present who knew the dangers of throwing the grenade and how to properly protect the individual who was inexperienced in it.

Ensure you are able to throw the grenade far enough away to not get yourself or some unintended target hurt…ya know like a victim whose name will more than likely be made public because there are no such protections in a libel suit.

August 15, 2013
Atheism in The Military - Isn't that Anathema to Authority?
Next Post

August 17, 2013 Only a Sith...
Recent Comments
45 Comments | Leave a Comment
Browse Our Archives
get the latest from
Nonreligious
Sign up for our newsletter
POPULAR AT PATHEOS Nonreligious
1