Everybody says their Catholics are the most hardcore, but I’m here to tell you that my German-Polish family is probably a front-runner for the gold medal winners of Catholic fervor. I grew up thinking everybody had an aunt named Sister Seraphia and uncles with fancy collars. We even had a little porcelain “Child of Prague” toddler Jesus doll that we dressed up in fancy robes for major holidays. 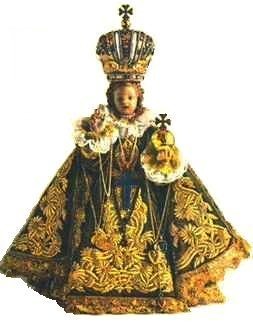 (Ours looked a lot like this one. Wish I still had it!)

One of my nun aunts is still alive; to keep her anonymity, I’ll just call her Aunt Nun. I adore her to distraction. She, like many nuns, is a schoolteacher. She is probably not one of those ultra-liberal progressive “Nuns on the Bus” types. Because she concentrates on math and generally teaches girls, you can imagine what my Christmas and birthday presents looked like for most of my young life (“oh, you’re bored? Go work on that book of math worksheets I gave you last month!”). My family moved a lot, but when I was about 7, my mom, my little sister, and I moved from Hawaii to live with my mom’s folks in Maryland, so I saw a lot of my aunt, who lived in a convent and taught nearby.

I was a scrawny, skinny little child, white-blonde and tanned like a teenager before Prom from being outdoors so much. I was very impressionable and tended to believe anything anybody said to me. And I was largely unchurched; I don’t remember once attending a religious service in Hawaii. I went from a feral, poverty-stricken existence to a comfortable middle-class life wherein church was not only mandatory and frequent but an invasive, all-defining force in my family’s life. It was like a weirdly religious version of The Princess Diaries.

Not only did my grandparents go to church every Sunday without fail, they also attended a midweek service, plus “vigils” (these are special services held before major holidays). Not only did they do Lent–and woe betide the child who gave up string beans or math homework!–but they also did meatless Fridays all year long. My grandfather, a subsistence hunter, had very strong opinions about makeup and comic books; he did not read anything but non-fiction or Louis L’Amour novels (and only the ones with no women on the covers). I doubt either of my grandparents cursed once in their entire lives. When I innocently informed my horrified grandmother that a “bitch” was a female dog, the resulting fallout would have sat well on any reality TV show. But my grandparents were good folks; even when they were upset with something my sister or I did, they never yelled at us or raised a hand to us. This form of gentle childrearing was altogether unfamiliar to us, as we had before this grown up with a father figure best described as, by turns, negligent and inconsistent as well as explosive. We fell into line very quickly and I don’t even remember being upset that my comic books and favorite TV shows vanished from my life as if they’d never existed, replaced by frequent trips to the library and “The Andy Griffith Show.”

So when my aunt and grandparents taught us catechism and sent us to Sunday School, we absorbed what we heard like the little sponges we were. When I learned about the Passion (that’s Jesus’ crucifixion), I went home in tears. I was devastated. It was all my fault. Mine. Personally. I was in hysterics. My poor mother had no idea what to tell me. On the one hand, obviously her little girl was taking this a bit too seriously, but on the other, who was to say I shouldn’t be taking it seriously? Either she comforted me or she denied her faith.

She ended up doing neither. Instead, she wimped out and sent me downstairs to my aunt to get the situation ironed out.

My aunt was writing letters on the dining table when I came into the room. She was always doing something, always so busy, but she looked up at me over those cats-eye glasses she wore (it was the 70s, give her a break) and asked what the problem was. I snuffled and sniffled and finally, she got it out of me. As gently as she could, she told me that it was necessary that Jesus had gone through that so I could be saved from my own sins.

I began to wonder what my sins might be. I was only 8 at that time and even I knew that I couldn’t possibly be doing much that was sinful compared to an adult. I’d gotten a good eyeful of sins in Hawaii. But she told me that my sins, as small as they were, were enough to boot me right out of heaven without Jesus’ help, and I should concentrate on living right and listening to my priest and family so I wouldn’t hurt him further.

I don’t remember ever hearing about heaven up till then, but the idea of a place to go after death fascinated me. I barely even understood what death was, after all. I asked her what happened in heaven, what it’d be like.

She didn’t know, she said, but it would be wonderful and I’d love it. I’d go to be with Jesus and become part of God.

“Which part?” I asked, in what I thought at the time a very rational sort of way. “His pinkie?” I remember asking that specifically. I was imagining being a tiny tip of his finger.

“Nobody’s totally sure,” she said, assuring me again that whatever it was, it’d be great. I was not entirely convinced.

A week or so later, my grandmother and aunt were driving me and my sister somewhere and I saw a sign on the side of the road advertising a church. The church itself didn’t look like any proper sort of church I’d ever seen, more like a regular store or house. It didn’t even have any stained-glass windows. If it weren’t for the sign, I’d never have noticed it.

The huge wooden sign erected all across its roof read, “Jesus visits here every Sunday!”

I immediately asked my aunt if we could go there next weekend instead of boring old Sacred Heart because Jesus would be there and I wanted to see him (to clarify, I was the sort of child who could spend hours plotting how I’d use the flying sub advertised for $2.98 on the inside-back-covers of my comic books). I still remember the look the women exchanged as they wondered how to address this question. Finally my aunt told me that Jesus visited all churches, only we couldn’t see him, and we would certainly not be visiting any other church any time soon.

I was hugely disappointed. I knew Jesus wasn’t visiting us in church, as I had never seen him. This other church was convinced he was visiting them. I couldn’t imagine that they were lying. I wondered if he really wore that big white and red dress or not, and if he was nice. I wondered if he had a special pew he sat in or if he just came in and hung out with everybody. This was probably where I got my future obsession with finding Jesus, with seeing him, with getting as close as I could to him. I began to realize that churches had different ways of seeing him and dealing with him, and if I never saw him in my church, then clearly the problem was that I was going to the wrong one. The idea that he wasn’t real just didn’t even occur to me at that point. Everybody said he was real. Why would they lie about something so huge?

May 10, 2013 GMing the Antichrist
Recent Comments
0 | Leave a Comment
Browse Our Archives
get the latest from
Roll to Disbelieve
Sign up for our newsletter
POPULAR AT PATHEOS Nonreligious
1