I’m out of the Southern Baptist megachurch by now and sitting in the school library at a long table with some girlfriends researching something or other. The library is built right in the middle of the school building itself, with glass walls so anybody inside can see everything going on outside, but the noise is lessened.

Outside, in the school’s hallway, one of our school’s two Weird Kids walks past with his backpack on. Nobody carries backpacks during the day, but he does. He’s tall, lanky, greasy-haired, always poorly-dressed in dirty black clothes, and as always he’s wild-eyed. A couple decades later, we’d think he was on drugs. Now, in the library, one of the girls says, “I think he’s a Satanist.”

It’s 1987 or so and the height of the Satanic Panic. “Why do you think that?” I ask, as the rest of us lean forward, eyes wide, to gossip.

“He carries the Necronomicon in his backpack–I saw him get it out the other day,” says my friend in a hushed whisper. We all know that it’s some kind of demonic Bible. We don’t realize it’s as fake as can be. Just the name scares us. Another girl whispers, “He says he has a vial of human blood in there too.”

A thrill of fear goes through the girls at the table. While I don’t doubt that he does, since he really is that weird and unsettling, I frown. “You’re scared of him?”

“He says he can curse people!” says my first friend.

“So? Isn’t Jesus more powerful than Satan?” I ask, genuinely confused. “You know, ‘If he stands with us, who can stand against us’ and all that? Why are you worried about him cursing anybody? That’s stupid.”

This gets a flurry of “well, yes, I suppose”s from my girlfriends, but they are unpersuaded. I get the clear impression that no, actually, they think that his dark Satanic curses trump whatever Love’s Baby Soft-style Baptist theology they can summon to defend themselves. It never even occurred to me before this moment that a Christian had anything to fear from Satan. It’s a shock that will stay with me for the rest of my life.

My adult self realizes nowadays that to many Christians, Satan is very real–and necessary. Satan’s existence is a lot easier to prove and demonstrate than God’s, and Satan doesn’t mind getting his hands dirty while God clearly is taking a hands-off approach. Like medieval witch-hunters who clearly saw that Satan’s involvement with women indisputably proved the existence of a supernatural world, modern Christians can point to Satan’s clear involvement in their lives as proof that God, too, must exist, for Satan cannot exist without God. Christians are, by absolute necessity, downright obsessed with Satan. Surely he works even harder than their god does, considering how much he seems responsible for doing in our world.

I never did end up talking to the boy with the backpack. I wasn’t scared of him; despite the behavior of my friends, I figured that if I was Christian, I was as safe as could be from demons. It baffled me that my Christian friends were so terrorized by the idea of a demon or a Satanist. Besides, if this clearly disturbed kid was the best that Satan could do by way of a follower, I wasn’t impressed. It didn’t matter to me if he had such a book or vial on him, or didn’t. I just didn’t accept that demons were so common they’d possess people willy-nilly. It seemed far more logical to me that the boy was disturbed emotionally or going through a rough time at home or something like Bender in The Breakfast Club. But even if Satan was so hard-up for followers he’d pick on such a boy, what was the use of being a Christian if demons could hurt you whenever they wanted? Wasn’t a big part of God’s job protecting his children from demons? It made me uncomfortable to see my friends all but admitting they were on the losing team, and all over a kid who even I could tell was demonstrably not supernaturally influenced.

I’m telling you this so you’ll understand my reaction not long after that fateful day in the library when one of my boyfriends got exorcised by Pentecostals. 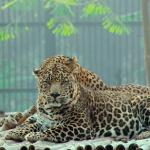 May 15, 2013 Rapture Scare, Part One.
Recent Comments
0 | Leave a Comment
Browse Our Archives
get the latest from
Roll to Disbelieve
Sign up for our newsletter
POPULAR AT PATHEOS Nonreligious
1

Nonreligious
Don't Ever Believe the Hype: Authoritarian Christians and...
Roll to Disbelieve
TRENDING AT PATHEOS Nonreligious