Hi and welcome to the very last of the A Thief in the Night movies! This one’s The Prodigal Planet (1983) and it’s by far the longest of all of them. In this post, I’ll set the stage briefly and then we can get to the movie. Feel free to watch along with me and comment here with any observations or snark you have–consider this an off-topic post as well, so anything else is fair game too! Welcome to the party!

Looking over the credits on the IMDB page for this clunker, I see that it is a full two hours long.

OMG IT IS TWO. HOURS. LONG.

I’m just astonished. The first one was just about an hour long; the others inched a little further longer. But this one’s a full two hours. What on earth are the filmmakers even going to find to talk about? The mind boggles.

The cast list isn’t surprising. William Wellman Jr., who played David Michaels, the fake soldier who made the fake Mark from the last movie, is here. So is Thom “Sideburns” Rachford, playing the evil UNITE superspy and pencil-pusher Jerry Bradford. Russell Doughten shows up again as the beardo Matthew Turner, who was the nice preacher from the first movie who became a fugitive and painted a huge Endtimes mural on the wall of his farmhouse.

Pretty much everyone else from the other three movies has been murdered by UNITE already.

But a few new names are surprising. Besides William Wellman Jr., we see Lynda Beatie and Robert Chestnut showing up as actors. Both of them are actually working actors in secular mainstream movies and television. I wouldn’t call them “A” names, no, but they’re professionals in a sea of names that are without any doubt in the world just Doughten’s church pals (most of the actors in this movie don’t even play named characters in the cast list on IMDB). Terry Lynn Hall, for example, shows up only in one other movie–along with quite a few ATITN alums–but for some reason she’s playing one of the major antagonists here. This is some goofy casting, and promises to produce a movie that is nonstop cringeworthy.

I also notice that William Wellman Jr. helped contribute “additional story material” to the movie, which means this might actually be an actual movie and not just an extended sermon with improbable skits in between lectures. Doughten wouldn’t let him touch Image of the Beast, after all, but this time he bent a little. I can only imagine how that conversation went with Doughten when Wellman, a professional actor with a good pedigree in Hollywood, had to tell the Jesus Man that his Rapture crackfic was totally ridiculous. Doughten sure doesn’t strike me as someone who takes concrit very well.

Funny note: Colleen Niday, who played the Raptured Jenny in the first movie, isn’t in this cast list (of course), but we have a Mike Niday who’s shown up in all of them as “Jim Wright.” I can’t even remember this character, but he’s been in all of the movies. Mike is of course Colleen’s husband–I can see a lot of obituary notices online for their family members that list them together as survivors. Both of them melted out of moviemaking shortly after these movies wrapped.

Why Am I Doing This?

Because I like bad movies of any genre, especially ponderously-sincere bad ones. I think they’re funny and that they reveal a lot more about their creators than those creators should ever want people to know about them.

Because I want to be able to say I saw all of the ATITN movies. I feel like the task is unfinished and I want to wrap the series up.

Because the themes I’ve been seeing in the first three movies sound like they are going to hit their nadir in this one.

Because I’m curious about just how far William Wellman Jr. was able to make this movie watchable.

I’ll be watching for the adult themes and abandonment motifs that marked the first three movies as being especially traumatizing for children–as well as watching for the grand arc conspiracy theories about the Endtimes in it that seem to have shaped fundagelical fever-dreams about the topic for decades afterward. So far the first three movies fit very well into the general fantasies fundagelicals have about the end of the world–and this one is probably going to slot into them just as well.

Give Us This Day Our Daily Hooch.

I thought long and hard about this, and I went with watermelon wine coolers in a 50th Anniversary Wizard of Oz glass tumbler my mom collected in the 1980s. This one’s got Glinda on it in her big pink gown! I don’t know where Mom got them–I suspect they’re from a movie theater chain called Loew’s, since that’s printed along the side of the glass.

I also made popcorn the old-fashioned way, with a big cast-iron pot and kernels of popcorn. NOM NOM NOM!

I’m starting the movie at 5pm Pacific Time and hope you’ll join me. (Later tonight I’ll put up the movie review itself, after Sober-Cas corrects most of the typos and adds some links to explain some of the inevitable tangents I’ll sure I’ll be going off on.) 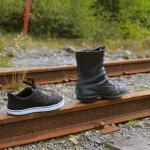 March 30, 2018
A Thief in the Night: Traumatizing Children for Fun and Prophet
Next Post 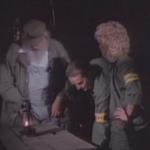 March 31, 2018 The "Prodigal Planet" Grand Finale Review-a-Thon!
Recent Comments
0 | Leave a Comment
Browse Our Archives
get the latest from
Nonreligious
Sign up for our newsletter
POPULAR AT PATHEOS Nonreligious
1