Hi and welcome back! Not long ago, I finally began hunting for an explanation for something I’ve done for as long as I can remember. See, I often mis-say specific words. I know the word I want and I’m thinking of the right thing at the time, but the wrong word consistently pops out. It turns out there’s a term for this situation: semantic paraphasia. Today, Lord Snow Presides over our brains — and the stuff we literally can’t help sometimes.

This Weird Thing I Do.

When I try to say very particular words, sometimes the wrong word pops out of my mouth. This happens around a few specific word pairs:

I must stress that I always know what word I mean. I definitely know my colors! But if I’m not being very careful to say the correct word, I’ve got a good chance of saying the wrong one. And even then, it happens.

Years ago, I almost got my parents lost in Atlanta that way. I told my dad to go west off the highway to visit me, when he needed to go east. Thankfully, he had already scouted the map of my area and he knew about this quirk of mine. So he knew my town lay eastward, not westward.

I first noticed that I do this in high school, but I don’t know how long I’ve done it. It’s possible I’ve done it my entire life. Recently, I decided to do some searches to see if this phenomenon had a name.

And it just might. (<— that was literally my first hit on the same question as its title, and it was a hole in one)

(PS: Writing this subsection has been more difficult than I thought it’d be. I’ve proofread it many times, but I’m still nervous it contains a switch.)

We’re made out of meat. We’re singing, dancing, talking meat.

Yes, most of all we’re talking meat. We might not be the only meat that communicates with other meat, of course. But hooboy, we do communicate a lot!

The human brain might be mysterious in a lot of ways, but we’ve got a pretty good handle on how it stores and processes language. We start learning the rhythm of our mother tongue in infancy — and those early childhood years turn out to be extremely important in the acquisition of language.

Man alive, the way our brains work with language will never be not-fascinating to me.

But with all that intricacy, stuff occasionally goes wrong in our brains. For various reasons, the areas of the brain that must communicate with each other to help us store and process language sometimes don’t talk to each other correctly. Often but not always, the reasons center around some injury to the brain: a head injury causing lesions, injuries caused by oxygen deprivation, stroke, etc.

(And here, I think about all the accidents I got into as a young child with poor supervision. I’m seriously very lucky to be alive.)

In extreme cases, these injuries result in aphasia. That means the inability to meaningfully communicate — sometimes at all.

In less extreme cases, the result is paraphasia. A person with paraphasia can still communicate, but they switch words sometimes. The causes remain the same as with aphasia.

I couldn’t find out how many people suffer from paraphasia, but one source cited (without attribution) a million aphasia sufferers in the United States. I’m guessing paraphasia is way more common.

In fact, there are lots of different types of paraphasia. If that’s what’s going on with me, I’ve got one of the mildest kinds: coordinate semantic paraphasia. In this type, the switched word is still in the same category as the desired one. So in my case, I’m still saying a secondary color or a direction, just the wrong one. And I don’t have many pairs to worry about.

With other kinds of verbal paraphasia, the switched word wanders further and further away from the desired one. As per La Wiki:

Coordinate semantic paraphasias replace the target word with one that is from the same category, such as tiger for lion.

Associate semantic paraphasias replace the target word with one that is related to the target but is not of the same category, like replacing foot with shoe.

Superordinate semantic paraphasias replace a specific target word with a more generalized group to which the target word involves, such as replacing pear with fruit.

Part-whole semantic paraphasias replace the “whole” with the “part” as in finger for hand; or, conversely, the part with the whole, in the case of leg for foot.

Finally, a visual semantic paraphasia replaces the target word with a word that shares visual features with the target, such as knife for nail.

Part of me wonders if some of this might be inherited, since my mom used “thing” as a stand-in for a whole lot of words. (Going by that link, I notice that I also use “circumlocution” sometimes when I can’t think of a word. Tinfoil becomes shiny metal kitchen paper.)

And there are other types of paraphasias besides even verbal. (An interesting paper.) In these other kinds, people might switch out words that are gibberish but retain the number of syllables as the desired one, or which retain the overall sounds involved.

There are lots of ways our brains can misfire with communication!

Where Paraphasia Leads: The Problem of Hell.

Of course, I always caution people not to diagnose themselves, and I’m not doing that now. I would need professional confirmation of anything, along with extensive testing as well. It’s too minor a problem to worry about it like that. Plus, the mere fact that I can, with difficulty, adjust for my problem might disqualify me from that diagnosis. That said, dang, what I’ve learned over the past few days has been consistent with what I’ve experienced for so many years. It’s just a relief to know there might be an explanation for it.

And regardless of whether or not paraphasia explains my difficulty, this whole situation led me to thoughts about how toxic Christians threaten people for rejection of their demands.

Our brains are beautiful, but they are meat. We can’t always help how our meat-brains handle things. People who suffer from brain injuries often find their personalities shifting — sometimes becoming the exact opposite of how they used to be. For that matter, folks on the autism spectrum can have trouble with accepting false religious claims as truth. And other mental conditions besides might prevent some people from ever being able to believe or comply with Christian demands.

For that matter, some people are way too young to understand any of that stuff. (Not that toxic Christians care.)

Being Held Responsible For What We Can’t Help.

Of course, Hell-believing Christians have tons of ways of hand-waving away such difficulties. Oh yes. Their vengeful, bloodthirsty, wicked god will totes understand. They tell us:

He’ll forgive. He’ll extend grace. Just trust in him. And comply with our demands regardless. But everyone else gets the hammer! Everyone else goes to Hell for noncompliance! You don’t qualify for real grace. YOU get the conditional kind!

(See also: people in isolated areas who die without ever hearing about the supposed “good news” of eternal torture for disobedience.)

Oh, we could have a bunch of discussions about this logical inconsistency alone. After all, it forms one of the planks of the Problem of Hell. But I’ll just leave it at this: the way Hell-believers hand-wave this inconsistency does not represent real grace. They’re just moving the Problem of Hell over a step and then declaring victory. In truth, the more we learn about human thinking and behavior, the less we seem to find that we have a lot of choices about how we go through life. And the more hand-waving those Christians will need to do.

This whole question reflects toxic Christians’ struggle to square the circle of an obviously-not-gracious god with their own head-canon about his absolute graciousness. He’s not. But oh, Christians really want him to be!

Today, Lord Snow Presides over the stuff we just can’t help doing — and where this truth leads us in the case of religious threats.

NEXT UP: A losing strategy for dealing with Christian abuse around deconstruction — but why ex-vangelicals pursue it nonetheless. See you next time!

November 28, 2021
This Seventh-Day Adventist Pastor Told Us Exactly Who He Is (and More)
Next Post

December 1, 2021 The 'Christian Love' Flows for Deconstruction
Recent Comments
0 | Leave a Comment
Browse Our Archives
get the latest from
Nonreligious
Sign up for our newsletter
POPULAR AT PATHEOS Nonreligious
1 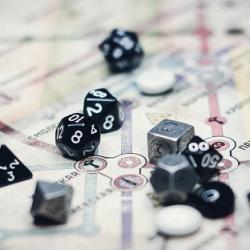