in memes begins responsibility | A Call to Unify the Nonreligious

in memes begins responsibility | A Call to Unify the Nonreligious January 29, 2016 Alice Andrews

But the truth is, it’s a great word — and judging from what one undergrad class of mine thought memes were (‘pictures with words’), its precise meaning is likely unknown or misconceived by many. Indeed, memes are more than just fluffy cat pics with text. A meme, as Richard Dawkins defined it (and later Susan Blackmore expanded upon), is the cultural equivalent of a gene. Memes are ideas, for the most part, that get spread (like a virus) from brain to brain — and  generation to generation. In Blackmore’s conceptualization, memes have their own ‘need’ to be passed on, apart from any human agenda or even any “selfish gene’s” agenda.

The meme that’s infected me — and using me (currently!) — is Sacred Naturalism.

A little bit about Sacred Naturalism

The perception of the sacred is likely a human universal, which, when participated in, fulfills a real, human need to ‘set things apart,’ and as Jonathan Haidt says “invest objects, people, places, days, colors, words, and shapes with extraordinary importance that is in no way justified by practical or utilitarian considerations. The psychology of sacredness may (or may not) have co-evolved with belief in gods, but it is now a very general aspect of human nature.”1   (See my October piece on the sacred.)

‘Naturalism’ is a philosophical term that “asserts that natural laws are the rules that govern the structure and behavior of the natural universe, that the changing universe at every stage is a product of these laws.”2 ‘Naturalism’ and ‘naturalist’ often bring to mind ‘nature’ — an apt and important association for sacred naturalists, as many of us share a desire to protect and nurture the natural world. Many of us care about ecological wisdom, the rights of nature, and a sustainable future. And we recognize that we are nature — and care about human flourishing and well being.

In its literal sense, then, Sacred Naturalism is a special respect and care for the scientific approach to understanding the natural world, and to the natural world generally. It also ‘answers’ the real human need to feel a part of something greater than the self and the longing some feel for a connection (oneness) with community/nature/the cosmos. Reverence and awe of the natural world is enough for sacred naturalists who do not believe in a traditional, anthropomorphic god, but nonetheless view science and mystery as both valuable and compatible. (See our About section for more.)

The interfaith community assembled with the Pope at Ground Zero on September 11, 2015 was not only beautiful, it may have been unprecedented in its near-inclusiveness for such a media event. The spiritual leaders on the dais were there representing their faith-communities and offering words of healing; but someone, I think, was missing: a Sacred Naturalist — someone to represent the many millions of secular, humanist, agnostic, atheist, new-ageist, nontraditional religious, and nonreligious spiritual people who share in the collective grief of 9/11.

For thousands of generations, we humans have gathered strength by communing with others — by ritualizing and acknowledging our shared grief, humanity, hope, and unity. To be excluded from communing and memorializing that day does a disservice to us in countless ways. For one, it marginalizes all those who weren’t represented. While it would have been a great step forward if someone from the American Atheists or a Secular Humanist had been given the opportunity to speak that day amongst the rabbis and the priests, imams and pujaris, it would not have been as satisfying or appealing to me as having a sacred naturalist there representing me/us. It is difficult to explain why, but it’s essential that I try.

While I don’t self-identify as an atheist (I’m a sacred naturalist!), I don’t have any objections to the word and am glad there are those who identify as such. That said, dare I say, atheism is fundamentally a negative thing. I don’t mean that pejoratively (though an argument can be made that there are some voices such as the one belonging to the great Richard Dawkins, which have turned some folks off over the years). No, I mean negative in the sense of its essential stance. A-theism, where the a means not or away from god/religion. While it may seem I’m stating the obvious, I mean to bring attention to the word’s fundamental reactive position. We need atheism in its various forms, but we also need something that is affirming and positive. There’s a space/need in the world for something we can attach to — something with a larger and affirming vision that connects and unifies us.

Harry Harlow’s famous experimental monkeys instinctually attached to the warm and comforting wire-mom covered in terry cloth (even though ‘she’ offered no food)  — not the cold, hard wire-mom that fed them. Atheism does feed some heads, but that’s the whole point of Sacred Naturalism, we need more than just the food of our epistemic convictions which tells us that a naturalist view of the world is the most rational and just; like Harlow’s monkeys, we need something soft and not so rigid — something that reminds us (and invites us to participate in) the sacredness of the cosmos, the wonder, feeling, and mystery.3 Certainly, plenty of self-identifying atheists feel this, too, but the ‘brand’ I’m afraid doesn’t broadcast this. Even the symbol for the American Atheists, while fine, is simply, well; it speaks for itself: 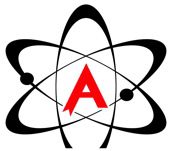 I think we need a symbol (and a movement) that is softer, warmer, earthy, home. And one that is more inclusive.

More on the American Atheists, 9/11, and what we need

In 2013 a lawsuit was filed by American Atheists against the 9/11 Memorial Foundation for displaying a cross at the museum at ground zero. The foundation identified the cross as a “symbol of spiritual comfort for the thousands of recovery workers who toiled at ground zero,” as well as an “authentic physical reminder” that “tell[s] the story of 9/11 in a way nothing else can.” The American Atheists “requested to display their own memorial next to the steel-shaped cross, possibly in the form of an atom or an American flag, to represent the ‘500 non-religious Americans’ who were ‘among the victims of the 9/11 attack.’4They lost the suit — even after an appeal.

Secularists lack a powerful, aesthetically appealing, and meaningful symbol that represents and unifies us in such moments (and at other times). I suspect whatever evolves, if anything does evolve, will be very simple. The cross, the Star of David, the star and crescent moon — these traditional religious symbols are all quite simple.

Maybe some kind of a circle (or circle within a circle) for us?

Or a tree with double-helix-inspired trunks, like our logo? 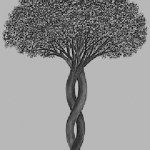 One of the core ‘missions’ for Sacred Naturalism is to support the cultivation and flourishing of ‘humanist/secular churches’ (what we’re currently calling sacred sites | sacred spaces); these are sites, spaces, centers, and temples which are the center of community life, where people can come together weekly, as well as other times, for music and words of science, philosophical wisdom, poetry, and connection.

These sacred sites | sacred spaces would be a gathering place for rituals and ceremonies that celebrate, honor, and commemorate the seasons, solstices, and cycles of life: births; coming of age (adolescence); partnership, love, commitment; and end of life. Contemplative practices, rituals, ceremonies, and other activities in the world that bring people into a closer relationship with the natural environment and other beings necessarily engenders deep caring. We need more of this. Desperately.

What do you think? I can see how some folks might be wary of these proposals as it sounds like I’m talking about creating a new ‘non-religious religion’! And a secular/humanist church? Won’t that just have the same trappings? I don’t think so. Nor do I think trying to unify and strengthen all us secularist folks who don’t believe in a punishing, anthropomorphic god (from agnostics to Zen Buddhists and everything in between) is anything like a religion. Current events suggest that the world’s major religions exert tremendous power and influence over bodies, minds, and the planet. While some of this influence brings about beneficial outcomes, we are all too familiar with the devastating actions that result from religion, such as sexual abuse, sexual repression, genital mutilation, murder, war, and terrorism.

I grew up with radical parents who talked to me about unions when I was two years old, so perhaps this impulse of mine to organize us comes from that early learning. But, of course, it goes beyond that. The desire to form coalitions and alliances is probably instinctual, an evolved psychological adaptation that was selected for via natural selection. (Whether by dint of group selection, or kin selection, or both (multilevel selection) is an interesting question. See: this and this. )
Regardless, memes, like genes, get selected (for) or they don’t; so whether this meme survives or not is up to those beings who receive its message (as well as those of us transmitting it). 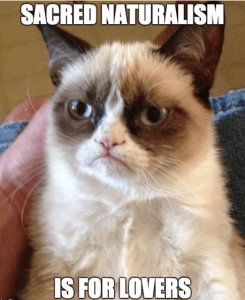 If you agree with me that the time has come for something that connects, unifies, and organizes atheists, agnostics, secularists, humanists, religious naturalists, spiritual naturalists, “new ageists,” as well as those who identify as nontraditional religious, and nonreligious spiritual, keep Sacred Naturalism on your radar and help us enlarge and refine this vision.

[3] In seeing this in terms of attachment theory and Harlow’s monkeys, I am struck by the notion of feminine and masculine principles, as well as the Dionysian and Apollinian (in Nietzsche’s sense). Sacred Naturalism fuses both these principles (Sacred as Dionysian, Naturalism as Apollinian).

Though there is a common perspective shared by all sacred naturalists, we are epistemically diverse. For example, some might identify as atheists, but feel (or wish to feel) a connection with nature and the cosmos. Such a sacred naturalist may, for example, feel dissatisfied with traditional accounts of an immaterial soul and welcome scholarship that suggests we evolved to feel this way. As well, such individuals may feel uncomfortable with the words ‘spiritual’ or ‘religious’ (see Spiritual Naturalism and Religious Naturalism – groups we hope to connect with), but find a home in the sacred – seeing the importance of sacredness in one’s life. On the other end of the sacred naturalism spectrum are those who may feel deeply spiritual and identify as agnostic, or even feel comfortable calling an organizing principle of the universe ‘god.’ Such folks may feel completely satisfied with the mystery of existence, death, consciousness, and other ontological and existential questions, without science-based accounts. 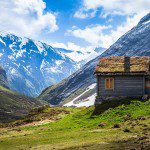 January 26, 2016
Redefining Progress: Keeping a Place for "Place"
Next Post

March 13, 2016 Steps Anyone Can Take to Unify and Change the World
Browse Our Archives
get the latest from
Nonreligious
Sign up for our newsletter
POPULAR AT PATHEOS Nonreligious
1