Find God’s will for your life…or else!

You know what will drive you absolutely bonkers?

Trying to find God’s will for your life.

Or maybe it’s just me. Maybe your Bible has a built in GPS with a direct line to heaven that tells you, in a creepy robotic voice,”Turn right in 300 feet.” “Go to Grace College in 2 months.” “Marry Dave now.” But I know mine doesn’t.

I grew up hearing sermon after sermon, reading book after book, about finding God’s will for my life. The idea was that God has a list of things that he wants me to do, and I had better figure them out or I might end up miserable and/or in the belly of a whale. Is God going to tell me what’s on that list? Don’t be silly! That’d be too easy.  But God does give us hints if we read our Bibles and pray.

And until we figure that out, we had better wait on God.

But we have to be careful- or Satan will trick us into wanting something that’s not God’s will.

So, basically, the message that I took away from high school was this:

If I can’t find it in the Bible, it’s probably not God’s will. But the Bible obviously isn’t going to tell me point blank. I have to read between the lines. It’s like a spiritual scavenger hunt!

If I don’t hear God tell me something, I better just do nothing because I supposed to wait on him. And if I do hear something, I better make sure it wasn’t just Satan talking. How should I know the difference? Well, I don’t know but if I had to guess, I’d say that God’s voice sounds a little like Morgan Freeman’s. So, just make sure it’s not Morgan himself whispering in your ear and you’re good.

And if I actually want to do something, it’s probably not really God’s will. In fact, I should probably do something that I hate and ask God to change my heart.

And if I get it wrong, my life is going to suck forever.

In fact, it’s kinda the stuff of nightmares and panic attacks and probably also part of the reason I grind my teeth and like razor blades a little too much.

Because I’ve never read my Bible and thought, “Willikers! This verse in II Chronicles seems to strongly suggest that I become a music historian. Jolly good.” (I always feel like I should talk like this in a British accent when I read the King James Bible. Am I the only one?)

When my boyfriend asked me on a date, I didn’t hear either God or Morgan Freeman yell down from heaven, “SAY YES!”

But I became a music historian anyway because I…gasp…LIKE music history. And I said yes to Abraham (wow…my boyfriend’s name is Abraham. This kind of kills my whole point, doesn’t it?) because I thought he was attractive and because he liked Queen. And I haven’t been struck by lightning yet.

Here’s the thing: I don’t think God’s will works like that. Not at all.

Do I think the Bible and prayer can give us direction in life? Yes! They are great things that God gave us.

But you know what else God gives us?

And a way for all of us to live, regardless of who we marry or what college we go to or what career we have.

And I can do that whether I join the Peace Corps or work at Taco Bell.

I cna do that whether I marry Abraham or Isaac or Jacob.

I can do that at Ohio State or at the University of Michigan.

Finding God’s will isn’t so much about what we do with our lives. It’s more about who we live our lives for.

So, wherever you end up in life, serve others.

…And if Morgan Freeman is whispering in your ear giving you life advice, well, I really don’t know what to tell you. 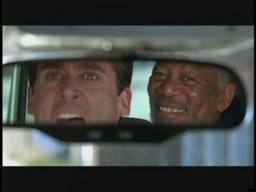 August 25, 2011 Probably the most important thing I've ever written about
Recent Comments
20 Comments | Leave a Comment
Browse Our Archives
get the latest from
New Visions
Sign up for our newsletter
POPULAR AT PATHEOS New Visions
1