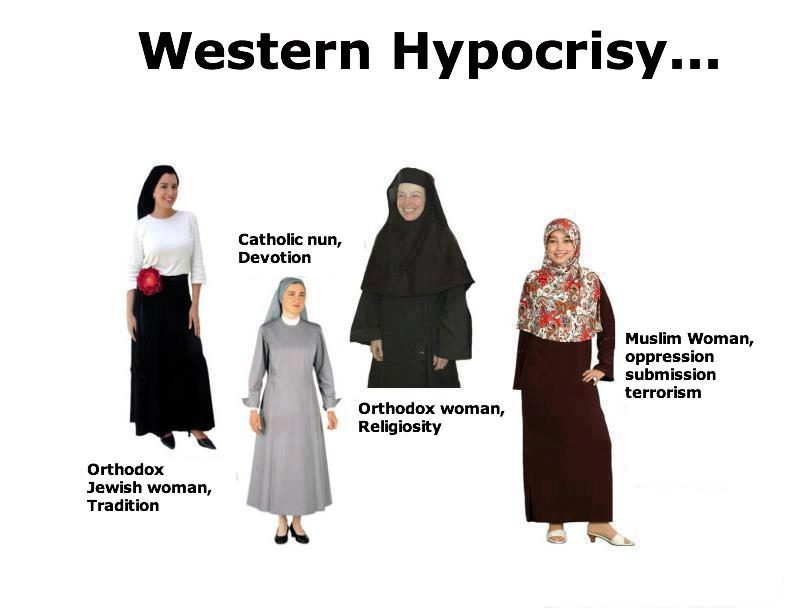 Could it be, I wonder, that for a Muslim woman, wearing a veil is not a symbol of oppression or male dominance, but a sign of religious commitment?

Could we perhaps even call it revolutionary modesty?

Now, all y’all who read my blog on a regular basis know that I am no fan of the way the church handles discussions of women’s clothing. So, don’t worry. I’m not about to tell you all what to wear or what not to wear.

But I want us to take some second looks.

I want us to take a second look at the Muslim woman in this picture.

I want us to take a second look at our so-called liberated American society.

I want us to take a second look at the church’s run-of-the-mill modesty sermon.

I want us to take a look at the clothes we wear and the reasons we wear them.

Last night, to prepare for my class the next day, I read a chapter in the book Shattering Stereotypes: Muslim Women Speak Out. In the chapter “Tapping Our Strength,” Eisa Nefertari Ulen, an American Muslim feminist, shares her thoughts on veiled Muslim women in America (emphasis mine):

Are women who insist on wearing the hajib unselfconsciously oppressed, or–particularly in the land that gave us wet t-shirt contests–are they performing daily acts of resistance by covering their hair? In the West, where long blonde tresses signify a certain power through sexuality and set the standard for beauty, are veiled women the most daring revolutionaries?

By living in constant alignment with faith, they challenge the misogynist systems that compel too many Western women and girls to binge, purge, and starve themselves…American Muslim women who choose to cover undeniably act out real life resistance to the hyper-sexualization of women and girls in the West…

It takes a warrior to be a Muslim woman.

So often we non-veiled, non-Muslim women look at our veiled sisters and we feel pity that they do not have the freedoms that we have.

Is it free to feel the constant need to compare ourselves to photo-shopped bodies in magazines? Is it free to be enslaved by the ever-evolving capitalist fashion industry?  Is it free to have see those of our sex constantly objectified and sexualized by the media? Is it free to dress for the male gaze?

Is that really freedom? 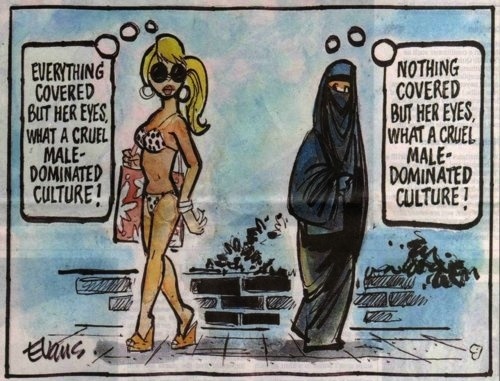 Of course, some of you are already preparing your comments which are going to say, “Well, some veiled women really are oppressed!” And you’d be right.

But here’s another quote by  Ulen to ponder:

I think about the women I know who cover themselves and their daughters for the wrong reason, and then I remember I know some women who wear push-up bras for the same wrong reason: to please men.

And, I’d add, the modesty sermons in the Christian church are almost always fueled by that same wrong reason.

“A good Christian man will be more attracted to a modest woman!”

Right now, half of American non-Muslim women encourage other women to be free by being naked and the other half desperately tries to get women and girls to cover up. Meanwhile, the men simply get dressed in the morning.

Whether we’re wearing hajibs or jeans or baggy t-shirts or mini-skirts, are our clothes making us slaves to patriarchy and consumerism? Are we letting debates over clothing keep us from being truly free? Or from embracing and loving and banding together with our sisters who dress differently?

Let’s think about that today.

I’d like to add that, it is about as easy to talk about Muslim women as it is to talk about Christian women. Islam is the second largest religion in the world and has billions of followers. Muslim women are diverse–some wear veils, some wear mini-skirts. Another thing to keep in mind!

February 23, 2012 In which I ruin the sanctity of marriage.
Recent Comments
16 Comments | Leave a Comment
Browse Our Archives
get the latest from
New Visions
Sign up for our newsletter
POPULAR AT PATHEOS New Visions
1