Growing up in a Fundamental Baptist high school, I heard some ridiculous arguments against feminism. My favorite goes something like this:

Feminists secretly hate women! That’s right! They hate women, and let me tell you why! They want women to be equal to men. That means, they think women don’t need men. Feminists won’t let men hold doors open for them or pay for their dates. And they won’t let men protect them! Chivalry is DEAD because of feminists. That’s right.

Oh, and don’t forget. Feminists are also responsible for the wide availability of The Pill! Because of The Pill, men now see women as sex objects! Because men don’t have to worry about having babies, men think they can rape women left and right without suffering the consequences.

I used to wonder how anyone could come to such faulty conclusions with this argument. How can these people not see that men who rape and hurt women, not feminists, are the problem?

But now when I hear these arguments, I’m not surprised. Not one bit.

People wanted too much freedom, so instead of The Pill, they ate the forbidden fruit. And now God is mad. Now God can unleash God’s wrath on people…

…unless, of course, people stop trying to be so independent and put themselves under God’s leadership so that God can protect people from God’s wrath.

Inherent in both of these philosophies is fear.

According to this philosophy, women need men, not because of love.

Not because we love our friends and fathers and brothers and possible romantic partners.

But because women should be afraid of men and their uncontrollable sex drives.

Because women need men to protect them from fearsome men.

Not because we love God and because God loves us.

But because we should be afraid of God and God’s uncontrollable wrath.

Because people need God to protect them from the fearsome God.

It’s all about fear, but there is no fear in love. So, which is it Christians? Are we about love, or are we about fear? You can’t have both. 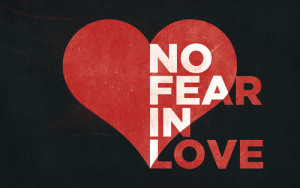 May 21, 2012 Can you tell the difference?
Recent Comments
10 Comments | Leave a Comment
Browse Our Archives
get the latest from
New Visions
Sign up for our newsletter
POPULAR AT PATHEOS New Visions
1

New Visions
#TheNewPacifism: Preston Sprinkle, and the Cost of "Privileged...
Sarah Over the Moon