In Praise of the Doubting Thomas–A Book Review 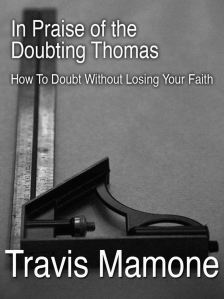 My friend Travis Mamone has a new ebook out. It’s called In Praise of the Doubting Thomas, and I recommend it.

It’s short, and I finished it in under two hours, but it’s also thought-provoking and affirming. Travis, in his honest, conversational writing style, tells the story of his faith journey–how he made peace with his doubts without giving up on his faith.

Travis’s faith journey reminds me of my own (and, indeed, since we’ve been reading each other’s blogs for a few years now, our journeys are connected in some ways). He talks about how sometimes he doesn’t believe that God exists. Sometimes his rational mind can’t comprehend God’s existence. Yet something compels him to believe. Some days he feels a presence or a sense of peace that keeps him from being able to identify as an atheist. He talks about embracing his dis/belief, identifying as a Christian agnostic, or an a/theist.

I really like how Travis blurs the line between the strict dichotomy of believer and atheist. I like how he admits to occupying a space somewhere in between, and how he affirms that. I wonder, if we were all as honest as Travis, whether or not many of us would admit to occupying that same space.

I would push back on one area of Travis’s book, that being his depictions of atheists. He describes them as people who “worship Christopher Hitchens,” or who fall into the “Richard Dawkins theism-equals-stupidity” category. I’ve honestly met very few atheists who fit this stereotype, and I believe that affirming Christian agnosticism has to come with a healthy affirmation of those who do not believe in God at all.

Despite that, I think Travis’s ebook is a good read for anyone wrestling with doubts. He simply tells his story–or at least, his story so far–and invites us to see our own stories within and to adopt Doubting Thomas as our patron saint.

If you’d like to read Travis Mamone’s ebook In Praise of the Doubting Thomas,  you can buy it at Amazon.com here or you can buy it here at Smashwords!  Also, be sure to check out Travis’s blog, The Boy With the Thorn in His Side. 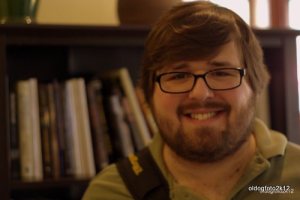 November 20, 2012 A new hope
Recent Comments
1 Comment | Leave a Comment
Browse Our Archives
get the latest from
New Visions
Sign up for our newsletter
POPULAR AT PATHEOS New Visions
1