On being a female body at a Christian college

On being a female body at a Christian college February 23, 2013 Sarah Moon

[I wrote recently about learning to love my body for Lent. Part of that loving so far has involved some deep contemplation about where the fear and hatred come from. And I’ve realized something.

Part of my body hatred, and by extension part of my self hatred, comes from the fact that oppressive people have used my female body  to justifying oppressing me.

I hate my body and myself because, deep down, I blame my body (and thus myself) for the ways in which I’ve been hurt by others. 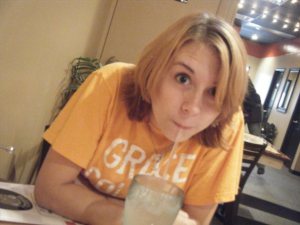 Two examples stick out clearly in my mind. Both from experiences at my former Christian school, Grace College.

It was the first week of my freshman year. We had a meeting for everyone in our all-women dorm to go over the basic rules. Don’t burn popcorn and set off the smoke alarm. Be in before curfew. No sex, drugs, or rock and roll (okay, maybe rock and roll was okay. Just not during quiet hours!).

During this meeting, the husband of our Residence Director came in to talk to us ladies about, you guessed it!

He started out by telling us to never let any Christian man blame us for their sins. Then he proceed to…well, blame us for his sins.

And what was his point?

My body was shameful. It was dirty. It could ruin lives and marriages just by existing.

This is the first thing I learned about my body at Grace College.

It was the second semester of my freshman year. We were required to attend chapel three times a week, so there I was. This week we were learning about relationships between men and women, how they were often broken in this world, and how we could fix them.

We did this by learning our roles.

And we could learn our roles, not just from Scripture, but from our bodies.

The speaker told the Biblical story of King Joash (and I’m still to this day not sure why). “Joash drilled a hole into the box,” he said. “Joash femaled the box.”

According to this man and his strange desire to associate being female with having a hole drilled into you, the reason men and women can’t get along is because men and women (mostly women) are rebelling against the nature revealed to us by our bodies.

The moral was that female people were trying too hard to give when they were made to receive and weren’t letting male people to what they were meant to do (which is apparently to spiritually ejaculate on everyone).

Female bodies were not built to give life (apparently child birth doesn’t count and we’re just the incubators) but to be fulfilled in receiving life.

But I fell for it for years and years. I saw myself as stuck in this body with its sinful breasts and its useless vagina.

I saw my body as a prison.

And in seeing my body as a prison, I blamed myself.

[Note: Though I learned some harmful things at Grace College, it was also at Grace College where I began the process of loving my body. That may be a post for another day]

February 27, 2013 Feminisms Fest: I need feminism because there is no love without justice.
Recent Comments
73 Comments | Leave a Comment
"Right there with you. The 'stop crying or I'll give you something to cry about ..."
Stacey Swanson Privilege, oppression, and being “nice”
"Sarah Moon writes as if she believes that complementarians have pulled this view out of ..."
Eli Taft Complementarians are trying to scam us.
"Two family members abused me, one I have totally reconciled with, the other, not. One ..."
Diana Marley When my abuser is welcome at ..."
"I want to share this article on FB, but totally don't want the image of ..."
Angie Mabry Liberating Liturgies: Why Mother Bear?
Browse Our Archives
get the latest from
New Visions
Sign up for our newsletter
POPULAR AT PATHEOS New Visions
1

The #1 Stoic Rule for Living...
Wake Up Call
Related posts from Sarah Over the Moon

New Visions
Telling My Own Story: A Perspective from a...
Sarah Over the Moon

New Visions
"Hymens are for Forming Blood Covenants" and Other...
Sarah Over the Moon
TRENDING AT PATHEOS New Visions