The cross and radical activism

The idea that Jesus chose, out of his own free will, to go to the cross is a favorite among abusive church leaders. What better way to get people to submit to you than to compare the God they worship to a lamb led to slaughter? Over and over and over I’ve heard Jesus’ submissiveness unto death used as an excuse to abuse or to silence those who wish to call out abuse.

I want to propose a different perspective and I want to start with a woman named Alice Paul.

In 1917, women in the United States were not allowed to vote. Alice Paul and a group of other women wanted to change that. These women boldly picketed the White House with banners that called out the hypocrisy of the man in the White House–Woodrow Wilson–who was so quick to send troops overseas to Germany to fight for “liberty,” but who was ignoring the fact that women here were not even treated as real citizens (sound familiar?).

Though their peaceful protests broke no laws, these women were arrested and sent to prison under the false charge of “obstructing traffic.”

Incarcerated without reason in the “land of the free” (a land in which she–as a woman–already lacked the rights of a full citizen), Alice Paul asserted her autonomy and her humanity by fighting back the only way she could. 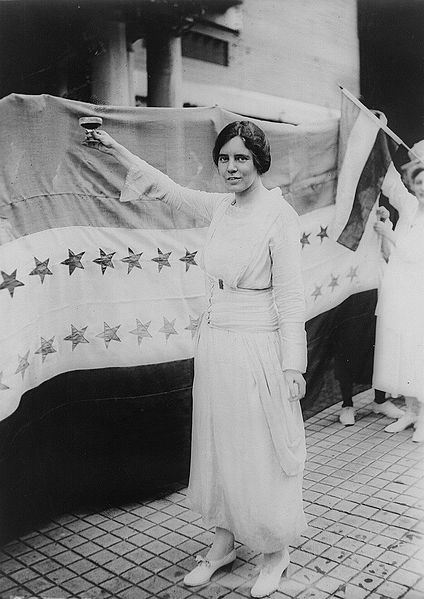 Alice Paul went on a hunger strike as a way to protest the unjust conditions she was facing.

The 2004 movie, Iron Jawed Angels, depicts this true story (with some obvious dramatizations of course). During one scene, Alice Paul (played by Hillary Swank) is sent to a psychiatric ward because she refuses to eat. The doctor examining her asks about her hunger strike.

Alice: The hunger strike was a tradition in old Ireland. You starve yourself on someone’s doorstep until restitution is made and justice is done.

Alice: A stinking corpse on your doorstep? What would the neighbors say?

We live in a world of violence, of poverty, of rape and war, of oppression and abuse.

We also live in a world of willful ignorance and pride.

People are starving and dying  at our doorsteps (metaphorically speaking), but we’re great at ignoring it. Sometimes it takes radical activism (like some literally dying on our doorstep) to change things.

Alice Paul offered up her life in order to fight injustice. Though she survived the hunger strikes (not every hunger striker does), she still willingly put her body at risk. She was willing to starve on the doorstep of injustice. In doing so, she put the United States to shame, uncovering its disturbing hypocrisy (a hypocrisy that continues today).

She gave herself up willingly.

Was this an act of passive submission?

Those who use the story of the cross to convince oppressed or abused people to stop fighting for justice are missing the point of radical activism. Sometimes, in the face of unrelenting oppression, brave, radical activists stand up and take control of their lives and bodies…

…by giving them up.

When Alice Paul, and Hana Shalabi, and other hunger-strikers stopped eating, it was not an act of submissive, obedient defeat.

It was a powerful assertion of bodily autonomy in a world that tried to deny their humanity.

It was a bold act of love by people who were willing to lay down their lives for their friends, their freedom, and their people.

It was a stance that forced oppressors to open their eyes, uncover their ears, and stare into emaciated face of the injustice they had caused.

God, as symbolized in the crucifixion, is with the victims who are oppressed. God is also with those who stand up and fight oppression.

The cross is a symbol of both the evils of oppression and of the radical activism that opposes oppression.

Jesus’ radical activism points us to a new world.

Anyone who tells you that the cross means you have to stop fighting oppression is missing the point.

April 8, 2013 On blogging and research projects
Recent Comments
15 Comments | Leave a Comment
"This, this right here. 👍👍👍"
Lir Talan 12 Reasons Why You Can Totally ..."
"I agree with you totally..I walked away from main stream Christianity and my calling due ..."
Bill Luginbill Telling My Own Story: A Perspective ..."
"Right there with you. The 'stop crying or I'll give you something to cry about ..."
Stacey Swanson Privilege, oppression, and being “nice”
"Sarah Moon writes as if she believes that complementarians have pulled this view out of ..."
Eli Taft Complementarians are trying to scam us.
Browse Our Archives
Related posts from Sarah Over the Moon