So when Patheos asked me to blog for their Spirituality Channel, I had to laugh a bit.

If you asked my religion, I’d probably have to tell you that I’m a Christian Unitarian Universalist who goes to a United Methodist Church sometimes even though I’m not Methodist, but mostly just stays in bed on Sunday mornings reading feminist theology and serving “communion” (usually cookies and milk) to my cat. I’m definitely a lazy hippie-liberal, though I’m pretty committed to Christianity even though (as a UU) I think all religions are just tiny puzzle pieces in the big picture that is the divine (and I will spare you the details of how much sex I have).

I guess somewhere between fundamentalism and wherever-the-hell-I-am-now, I accidentally became a “spiritual” person.

Anyway, this is my blog. I started it with a free WordPress.com account one day, a few years ago, when I woke up one day (okay, so it was a more difficult process then that) and realized that I didn’t believe all the things I used to believe in high school, and I wanted to talk about it. Now I use it to talk about feminism, recovering from abuse, liberal theology, and more.

I don’t think my archives have been imported to Patheos yet, but you can read by older posts at SarahOverTheMoon.com for now if you want to know more about me. I’m really excited to be writing for Patheos, contributing my own piece to the huge puzzle that is “the conversation on faith.”

April 27, 2013 Guest Post for Alise Write
Recent Comments
16 Comments | Leave a Comment
Browse Our Archives
get the latest from
New Visions
Sign up for our newsletter
POPULAR AT PATHEOS New Visions
1 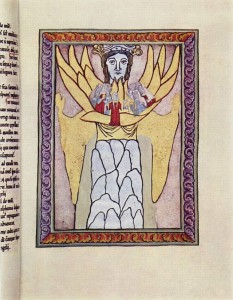 New Visions
#FaithFeminisms: I Know God Because I Know Feminism
Sarah Over the Moon