This is my fourth, and final (probably…for now at least) piece on some of the problems that unevaluated privilege can cause in Christian pacifist movements. I’m linking this series up to h00die_R’s synchroblog on the topic–The New Pacifism. Be sure to check out my other posts here,  here, and here.

Over the past few weeks at my church, my pastor–Julian Davies–has been going through a series of sermons on worldview. When I first heard about the series, I cringed a little. I had to take a “worldview” class in my Christian college, and often, to Christians, “worldview” means “this is the only way you’re allowed to view the world and anyone who views the world differently is BAD.” But it’s actually been an enlightening series. Rather than putting forth ways in which all Christians must view the world, Pastor Julian has been challenging folks at our church to rethink the worldviews handed down to us by an oppressive society and reflect on how those worldviews may be affecting the way we view and treat others.

We often fail to think about worldview. Pastor Julian describes it as the roots of the tree, which are buried underground, but which grow into and nourish the tree trunk, branches, and leaves that we do see. Problems in the roots will lead to problems in the branches, whether we recognize what’s going on in the roots or not.

I’m going to suggest that some branches of privileged Christian pacifism have a worldview problem.

Back when I was really into Christian pacifism a couple of years ago, several people recommended  that I read the book Political Jesus, by John Howard Yoder. Eventually I went on Amazon to read the reviews. Though I’d never heard of John Howard Yoder, the first review was a name I was very familiar with. This familiar reviewer gave Political Jesus five stars, calling it “the most valued theological work I own.”

This familiar reviewer was Hugo Schwyzer.

(You can read the entire review on Amazon here. It’s still the top review)

Knowing Schwyzer’s history (not to mention his present), this turned me off to the book for awhile. I was uncomfortable with the idea that Schwyzer–a man with a history of abusive and predatory behaviors–could read this theological work and come to the conclusion that it was “the most valued theological work” he owned.

Months later, my discomfort was affirmed when I discovered that John Howard Yoder and Hugo Schwyzer’s lives had some disturbing similarities.

John Howard Yoder sexually assaulted and sexually harassed multiple women (some estimate over 80 or even over 100). Then, when he submitted to church discipline and apologized, some chose to either completely ignore his history but continue to promote his work, or to treat him like the hero in a redemption narrative.

Today, Yoder’s books continue to be popular among some Christian pacifists. Shane Claiborne quotes him in his books, Stanley Hauerwas continues to praise his work, and other pacifists say it is essential reading on the topic of pacifism.

There are certainly pacifists who are not afraid to call out Yoder’s behavior for what it is (check out the blog Our Stories Untold for a great example of this, especially this important piece and this one–both were essential research for me as I wrote this post), but it sure as hell doesn’t make me feel safe in pacifist movements that there is such an effort to ignore, minimize, or dismiss what Yoder did.

How can so many pacifists continue to minimize Yoder’s actions and still call themselves non-violent?

What are some possible worldview problems that lead to this thinking?

They can accept Yoder without question or disclaimer because they treat pacifist theology as a hypothetical thought exercise, instead of as a “reflection on praxis” (Gustavo Gutiérrez, A Theology of Liberation).

They can accept him because we live in a patriarchal society where we’re more concerned about the reputations of white men than the safety of those they hurt. As this writer exemplifies: “I am concerned that we can get the impression that the words abusive and harassing capture the sum total of Yoder’s relationships with women.”

They can accept him because there is this idea floating around that all sin is equal and unaffected by power differentiation, and that includes violence. A quote I stumbled across while doing research for this post sums up this idea disturbingly well: “When we know that all of us fall short of God’s will, why are we singling out Yoder’s behaviour?”

They can accept him because they have a limited definition of what violence is, and that definition does not include (or begrudgingly includes) sexual assault that falls short of forced intercourse. This is why you see so many people talking about Yoder’s actions as “sexual misconduct” or “inappropriate behavior” instead of as what they are: Violence.

They can accept him because they are influenced by the same rape myths and rape culture ideologies as the folks who write Christian dating books. A quote by Stanley Hauerwas (who has described Yoder’s behavior, not as assault, but as “experimenting” in the free love movement of the 60s), illustrates the idea that even pacifists can teach ideology that enables sexual assault: “In the church we tell you what you can and cannot do with your genitals. They are not your own. They are not private.”

They can accept him because they, like much of American culture, uncritically consume redemption narratives, as Dianna Anderson puts it in this wonderful blog post.

I believe in peace-making. I believe it’s an important, essential part of creating a just and equal world. But privilege and dangerous worldviews can turn pacifist movements into just another tool of oppression. Are we truly creating paths with our pacifism that can lead to liberation for all? Or is our pacifism just a cover for privileged folks to gain more power?

Let’s reflect on that, and then let’s not be afraid to speak up, call out, and make changes.

November 1, 2013
Privilege in Christian Pacifism: What Counts as Violence?
Next Post 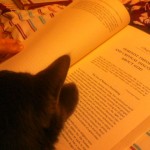 November 9, 2013 Must Reads!
Recent Comments
9 Comments | Leave a Comment
Browse Our Archives
Related posts from Sarah Over the Moon