As regular readers know, I’ve recently read the Christian marriage book, Love and Respect (which was supposed to be included in my “You Are Not Your Own” series, but had to be cut due to time constraints), and have been discussing it here in blog posts and on Twitter.

The big theme of the book–the one from which the title is derived–is author Dr. Emerson Eggerichs’ theory that a man’s primary need is respect, and a woman’s primary need is love. Eggerichs’ believes women need to learn how to respect, because they do not naturally know how to, while men do. Men, on the other hand, do not know how to love, while love is a woman’s “mother tongue.” (pg. 48)

It’s interesting, Eggerichs’ claim that men naturally know how to respect others. Start talking to women professors, managers, and pastors. Ask them if the men they teach, supervise, and lead display this “natural” male respect toward them.

Often, the story I hear and see is the opposite. I grew up hearing my dad make fun of and talk over my mother. I’ve experienced the frustration of having a man dismiss my point in a conversation, then turn around and praise a man making the same point. I’ve seen people rudely interrupt female pastors I know, only to drop everything and listen intently when a male pastor starts talking.

With these scenarios in mind, it’s interesting that Eggerichs thinks it’s men in society, as opposed to women, who most need respect. That would be like trying to say that it’s the richest people in our country who need the most tax cuts (oh…wait).

In one section of the book, Eggerichs argues that modern society has perverted the Love and Respect model to downplay natural male need for respect. An example of this perversion?

…the primary meaning in Otis Redding’s song is a cry from a man’s deepest soul that says respect is what he needs and he’s ‘got to have it.’

On one level the song functions as a metaphor for the condition of African-Americans in a racist society. But Aretha’s being a Black woman enables the song to tap a deeper meaning.

Whether sung by Otis Redding or Aretha Franking, this isn’t just a simple song that Eggerichs can take and use to support his sexist claims. This song isn’t about or for white men like Dr. Eggerichs.

When Aretha tells her audience to find out what what R-E-S-P-E-C-T means to her, she is demanding respect for herself and for a group of people that do not get much respect in a patriarchal, white supremacist society.

For a white man like Eggerichs to insist that men like him are the ones who need respect and who should be demanding it is laughable. Everywhere we turn, something or someone is reminding everyone to respect white men–and white people in general–and others in positions of power and privilege.

Love and Respect is just another voice in this oppressive chorus. 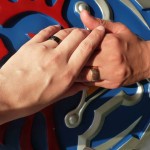 December 17, 2013 #PlanetCCM: When Planet IFB has no CCM
Recent Comments
7 Comments | Leave a Comment
Browse Our Archives
get the latest from
New Visions
Sign up for our newsletter
POPULAR AT PATHEOS New Visions
1

Did Donald Trump Break the #1...
Wake Up Call
Related posts from Sarah Over the Moon