I’m glad that mainstream Evangelical Christianity is starting to talk about feminism and women’s rights. I really am. I smile whenever I go into Barnes and Noble and see Jesus Feminism or A Year Of Biblical Womanhood on the same shelf as works by Mark Driscoll and Joshua Harris. It gives me some hope for humanity.

But progressive evangelicals/post-evangelicals need to stop pretending that, just because we read Rachel Held Evan’s blog everyday, or held up a sign that said, “….and I am a Jesus Feminist,” means that we are immune to misogyny happening in our own ranks.

In fact, I have seen some blatant, scary misogyny coming from the some of the Christian men who claim the label “Jesus Feminist.”

This shouldn’t be surprising. “Secular” feminists have the same problem–men join with us, claiming the label “feminist,” and will hide behind that label every time they are called out for mistreating women.

There’s no reason why we should let our guard down when men start calling themselves “Jesus Feminists.”

I want to talk about this, because I recently witnessed some pretty terrible sexism coming from fellow Patheos blogger, Zach Hoag. Hoag has been writing and promoting “Jesus Feminism” for some time now. He writes posts speaking grandly about overcoming oppression, and making the church a better place for women.

Take Hoag’s latest post, “From Issue Writing to Idea Writing,” which Hoag praises the age of technology, because it opens up more and more platforms for people to speak out against their oppression:

Those times are over. So too are the times when women could be oppressed, LGBT people marginalized, people of color appropriated, and science denied without a hint of any pushback at all (except from those liberal academic elites who all have an anti-christ agenda anyway). Now, faithful, believing Christians are the ones speaking prophetic truth to power.

And these are Reformation days.

This all sounds pretty, but what happens when women take Hoag’s own advice, offering him some feedback?

To figure that out, we need only look at the comments section on this very post. A woman criticizes Hoag, and Hoag reads her comment as threatening, responding dismissively and condescendingly. (Below is a screen shot. Link to the actual comments). 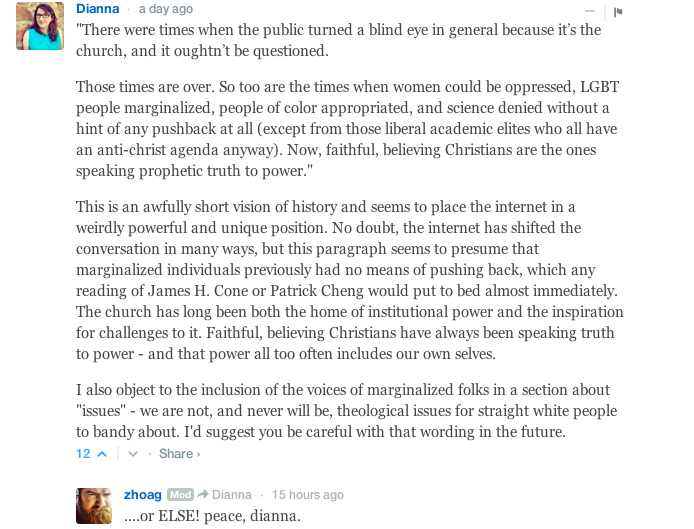 The dismissive attitude is frustrating, but it’s something many feminists have come to expect.

Men are on our side…until we tell them, “Well, actually…” Men support us, as long as we praise them for every effort, and never attempt to correct them or offer pushback. Men demand we educate them, but see us as threatening whenever we actually try to.

This is nothing unusual.

The most worrying thing, however, was in Hoag’s co-signing of another commenter, who dismissed women’s disagreement as a “My bush is bigger than your beard contest.” (Below is a screen shot. Link to the actual comments).

A blog post about the internet helping us overcome oppression devolves into a comments section where the author of the post participates in MRA-style dismissals of women that include references to a woman’s genitals.

As Dianna Anderson (the Feminist blogger accused of starting this “contest”), pointed out to me,

…the “my bush is bigger than your beard” thing references stereotypes of ugly hairy feminists, and, in tone, reinforces the idea that women who don’t fit the patriarchy’s model of beauty are contentious, evil women.

Hoag also deleted any female commenters (myself included) challenging his response to this misogynist comment, which is a bit ironic after his post praised the internet for allowing marginalized people to stand up to oppression. Guess Hoag’s not as on-board with the new freedoms the internet provides as he pretends to be.

People have asked me before why I am suspicious of the evangelical Jesus Feminist campaign.

Because when women disagree with a Jesus Feminist man, it’s a “My Bush is Bigger than Your Beard Contest.”

This isn’t the kind of feminism that I want. I don’t want a feminism where men think they have the right to respond to a respectfully worded disagreement (or any disagreement, for that matter) by bringing up women’s genital area.

Is this really what Jesus would do?

Jesus was confronted and critiqued by women. In Matthew 15, when a woman challenges Jesus, he responds by listening to her, and even changing his actions based on what she had to say. I’ve said before that I’m not all that convinced that Jesus was a grade-A feminist, but he sure didn’t accuse this woman of wanting a “Bush vs. Beard” contest.

Hoag is right in one way, though. The time where you could co-sign blatant misogyny and still retain your unchallenged status as a Jesus Feminist is over. What Hoag does–dismissing, silencing, blocking, and deleting criticisms from marginalized people–is, as Suzannah Paul put it on Twitter, Empire Business, not Reformation.

We don’t have to stand for it.

Is this the feminism we have to settle for, Christian women? One where we must defer to men because they call themselves Jesus Feminists? One where men have the right to dismiss us, talking about our “bushes,” and we have to let them, because they aren’t “as bad” as Mark Driscoll?

July 14, 2014 Lauren Winner's Real Sex, and the Church's Responsibility to Single Parents
Recent Comments
1 Comment | Leave a Comment
"This, this right here. 👍👍👍"
Lir Talan 12 Reasons Why You Can Totally ..."
"I agree with you totally..I walked away from main stream Christianity and my calling due ..."
Bill Luginbill Telling My Own Story: A Perspective ..."
"Right there with you. The 'stop crying or I'll give you something to cry about ..."
Stacey Swanson Privilege, oppression, and being “nice”
"Sarah Moon writes as if she believes that complementarians have pulled this view out of ..."
Eli Taft Complementarians are trying to scam us.
Browse Our Archives
Related posts from Sarah Over the Moon