Growing up in (primarily, or nearly exclusively white) churches, I had often heard that the most important words in the world were the words of Jesus. We had Bibles that highlighted his words in red, and we memorized verse after verse after verse. And yet, I’d never heard much about Luke 4:18:

The Spirit of the Lord is on me, because she has anointed me to proclaim good news to the poor. She has sent me to proclaim freedom for the prisoners and recovery of sight for the blind, to set the oppressed free.

If we did talk about this passage, it became a spiritualized metaphor. Jesus was proclaiming good news to the “poor in spirit.” He was proclaiming freedom for “prisoners of sin.”

As I grew up and became a feminist and became more and more leftist in my theology and politics, I began to read this passage more literally.

Yet, what to do with the line about freedom for prisoners?

Most mainstream (white) feminists are not interested in freeing prisoners. In fact, the opposite is usually true. Many advocate for longer prison sentences, hoping that this will deter violence against women (even though studies show this doesn’t work). Most of the white churches I’ve been in talk about prison only as a warning to those who stray from church/God and as a witnessing opportunity.

Though some white people are more vulnerable than other white people to violence at the hand of our criminal justice system (white female rape victims, white sex workers, white queer and trans people, white people with mental illnesses, etc), for the most part, we are able to ignore it because it doesn’t devastate our communities.

We can’t look at what’s going on in our world today–from the injustice done to Marissa Alexander, to the murder of Michael Brown, and the awful police violence occurring in Ferguson—continue to ignore it, and still call ourselves Christians and/or feminists.

My church has recently had a series on victim blaming, and what God’s justice looks like, as opposed to the “justice” that our prison systems and police forces claim to bring. In one sermon, our pastor called us to think about how we, as a church, could stand in solidarity with those who have been/are incarcerated and with communities that are especially impacted by incarceration.

I have to admit that my answer to this call was, “I have absolutely no idea.”

I’m new at this. I know something needs to change, I know this is not what justice should be. But I don’t have any answers, so I’m not going to try to give them to you.

Instead, I want to invite you to participate a week of solidarity for Marissa Alexander, put on by Killjoy Prophets—a group of Women of Color Faith Feminists who know a lot more than I do.

Email Killjoy Prophets at  killjoysandprophets@gmail.com, and ask how you can get involved.

Tweet using the hashtag #Marissa418 (which reflects Luke 4:18—“God has sent me to proclaim freedom for the prisoners.”) .

Speak your support for Marissa Alexander and for other people (like Michael Brown) who have been hurt by our criminal “justice” system.

Spread the word on your own blog and/or on social media.

And then, if you’re a privileged white person like me who doesn’t know much about this topic, take some time to shut up and listen to the women of color who are putting this together. 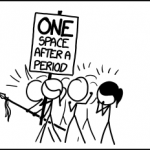 August 20, 2014 Reclaiming "Third Way"
Recent Comments
0 | Leave a Comment
"This, this right here. 👍👍👍"
Lir Talan 12 Reasons Why You Can Totally ..."
"I agree with you totally..I walked away from main stream Christianity and my calling due ..."
Bill Luginbill Telling My Own Story: A Perspective ..."
"Right there with you. The 'stop crying or I'll give you something to cry about ..."
Stacey Swanson Privilege, oppression, and being “nice”
"Sarah Moon writes as if she believes that complementarians have pulled this view out of ..."
Eli Taft Complementarians are trying to scam us.
Browse Our Archives
Related posts from Sarah Over the Moon