“Made Up, But Also True:” A Theology of “The Lego Movie”

I have a weird relationship with the Bible.

I grew up, as most Christian fundamentalists did, believing the Bible was literal. That every word was true. That every story actually happened. That if the Bible wasn’t literally true, then there’d be no reason to be a Christian.

So, when I went off to a state college and took history and science classes that convinced me that the Genesis stories weren’t scientifically accurate, and that several of the Biblical “stories” I’d grow up with didn’t mesh with historical evidence, my faith fell apart for awhile.

I stuck with Christianity in the end (after flirting briefly with agnostic unitarianism), but even then it was a Christianity that kept the Bible at arm’s length.

It wasn’t until recently, when my wonderful pastor Diana Davis gave me a copy of The Women’s Bible Commentary, that I began to genuinely fall in love with the Bible for the first time in my life.

I’m not interested in defending every part of scripture to show that it’s right or true or good.There’s some horrific stuff hiding in these gold-edged pages, and I don’t care to explain it away with fancy apologetics. Context is important, and can show that some of the stuff that seems terrible to a modern reader really isn’t so bad. But no amount of study can explain away all of the misogyny and violence, and I’m not going “call evil good,” even when it’s in the Bible.

But there’s much in the Bible that is liberating, empowering, and true.

Not all of the stories in the Bible are factual.

The world didn’t come into existence in six literal days. There was no flood that covered the whole earth. There was never a dude named Job who helped God win a bet with Satan. Jesus probably existed, but he probably wasn’t born of a virgin and probably didn’t do all of the miracles that are attributed to him.

Many of the stories in the Bible are not factual, nor do they pretend to be. But that doesn’t mean they aren’t true.

What do I mean by this?

And what the hell does this have to do with “The Lego Movie?”

(If you haven’t seen “The Lego Movie” yet, there are spoilers ahead so you should probably drop everything you’re doing right now and WATCH “THE LEGO MOVIE” RIGHT NOW)

When “The Lego Movie” begins, we see the wizard Vitruvius being attacked and overpowered by the movie’s main villain, Lord Business (who is basically an embodiment–embrickment?–of the “powers and principalities” of Ephesians 6:12). Vitruvius, though temporarily defeated by the “powers and principalities” of Empire and corporate greed, prophesies that one day “A Special,” a chosen one will rise up and defeat Lord Business:

One day, a talented lass or fellow

A special one with face of yellow

Will make the Piece of Resistance found

And with a noble army at the helm

This Master Builder will thwart the Kragle and save the realm

And be the greatest, most interesting, most important person of all times.

All this is true because it rhymes.

Eventually, the average Joe Lego, Emmett, gets caught up in a series of events that lead everyone to believe that he is The Special–the one who will save Lego-kind from Lord Business and a life of exploitation and dehumanization (de…Lego…ization?).

Toward the end of the movie, however, the truth comes out–Vitruvius’ prophecy was completely made up on the spot. He didn’t have a vision from beyond or a glimpse of the future. There was no “special revelation” that promised a future deliverance from evil.

For awhile, this leads the “good guys” of the movie to despair. If the prophecy wasn’t factual, what hope do we have?

However, when all hope seems lost, in what may be one of the most profound movie scenes I have ever seen, Emmett shares with Lord Business an epiphany that he’s had about the nature of prophecy and story–just because it’s made up doesn’t mean it isn’t true:

You are the Special. And so am I. And so is everyone. The prophecy is made up, but it’s also true. It’s about all of us. Right now, it’s about you. And you… still… can change everything.

Yes, the prophecy was made up.

And yes, many of the most powerful stories in the Bible are too.

Some were never even meant to be taken as factual. But that doesn’t make them worthless. That doesn’t mean we have to despair and settle for a life of oppression and dehumanization.

Because the prophecy is made up, but it’s also true.

We can latch on the the liberating power of God revealed in so many of the stories of scripture–the stories that Samwise Gamgee would call “the ones that really mattered.”

Did they literally happen? Some might have, many definitely did not.

But they can still be our stories.

Because the stories there are about humanity–they are about all of us.

And we can still change everything.

August 25, 2014
#Marissa418: White Feminists, It's Time To Question Our Trust In The Police
Next Post

September 10, 2014 No, We're Not All On The Same Side
Recent Comments
0 | Leave a Comment
Browse Our Archives
get the latest from
New Visions
Sign up for our newsletter
POPULAR AT PATHEOS New Visions
1 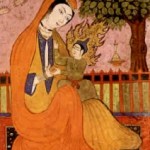