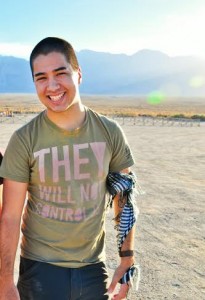 For today’s Liberating Liturgy, I am happy to share with you a creed from Ryan Kenji Kuramitsu. I really love this creed–it draws from sources as various as Charles Wesley and Samuel L. Jackson. I hope you’ll enjoy it as well.

Ryan Kenji Kuramitsu is a writer, activist, and undergraduate student at the University of Illinois at Champaign-Urbana, where he studies Social Work and Spanish.  Kenji is a multiracial Christian who is passionate about event planning, being an RA, and connecting with people.  He is interested in the intersection of faith, sexuality, and social justice and writes regularly about these and other issues on his blog, arealrattlesnake.com.  Ryan also volunteers and consults for a number of community nonprofits both locally and nationally, including the Refugee Center, The Reformation Project, Wesley Foundation, and the Japanese American Citizens League.

the Ultimate Revelation of the creative Love behind the universe.

I believe that the Eternal Divine is not trapped in some set of documents,

but that the Reliable, Infallible, Inerrant Word of God is,

and always has been, not a Manuscript, but a Person.

I believe that this Person, Jesus Christ, was born a scraggly peasant

to a humble father and one of the most amazing women to ever live:

born to raise the children of earth

(born that man no more may die),

sent by God on a stealth mission to assassinate death

all the while breathing new life into broken bones.

I believe that Jesus was killed because of us, not God:

that our shrouded hearts could not suffer the Pure Light,

couldn’t stand to be in the presence of such goodness.

I believe that God did not demand the lynching of an innocent man in order to forgive sin.

For God is not pleased with human sacrifice.  God is not bloodthirsty.

Still, by his unjust murder, I believe that this Lamb accomplished much,

tricking the devil, descending into hell, and swallowing up Satan’s kingdom,

forever robbing death of its power, and revealing the sacrificial justice system as bankrupt.

I believe in the Holy Spirit, who speaks into our lives and names sin,

who reveals that the Prince of the Power of the Air is alive and well in our Church:

whenever LGBTQ children are cast out of religious families,

whenever the blistering egos of reality television stars are inflamed and acclaimed,

and their victims are force-fed poisonous theologies of cheap grace.

I believe in God the Father, our brooding Mother Hen,

a Creator who would never self-inflict lacerating wounds

by eternally torturing human beings who are created in this God’s own image.

Still, I look around the world at times

and question how anyone could deny the justice of hell:

I believe in holy, wicked revenge on those who propagate violent anti-Christ teachings,

I believe in Samuel L. Jackson’s pissed off speech from Pulp Fiction,

that God will strike down with great vengeance and furious anger

those who would attempt to poison and destroy my brothers.

I believe that my ugliest sins, those I’m too ashamed to acknowledge,

will ultimately be purged from my withered soul;

I believe that ancient faith can be relevant today,

that we are meant to do more in this world than screw, make money, and die.

And I still believe in kingdom come, that all the colors will bleed into one,

or privileged prophets, speaking over the voices of the oppressed.

I believe in a God who does not discriminate on the basis of color, creed, sex, or sexual orientation

when handing out prophetic calling or spiritual gifts.

I believe that gender is not strict, not inevitably bound and fatally binaristic,

but that we are so much more than black or white, day or night,

instead enveloped in a brilliantly created spectrum of shades,

dancing and flirting with all the overlooked colors that flourish between dusk and dawn.

Finally, I believe in science: in responsibly using our God-given intellect.

I believe in evolution – that our earth is billions upon billions of years old.

I believe in the merits of medication and meditation

and that we are mandated as people of faith

and any theology that encourages us to dispose of our beautiful planet.

I long to see our hearts, souls, strength, and minds resynchronize with scripture,

eternally moving towards Lord Christ’s kingdom and God’s committed purposes in the world:

all the while making sure to love the lost, the last, and the least

at least as much as we love ourselves.

If you’re interested in sharing your own Liberating Liturgy, read this blog post, take a look at some of the other liturgies that have been shared so far, and email me at moonsn11@gmail.com

September 24, 2014
Liberating Liturgies: Anselm of Canterbury, and Jesus Our Mother
Next Post 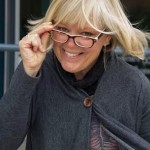