The Banality of Angst

Review of Faith and Other Flat Tires by Andrea Palpant Dilley 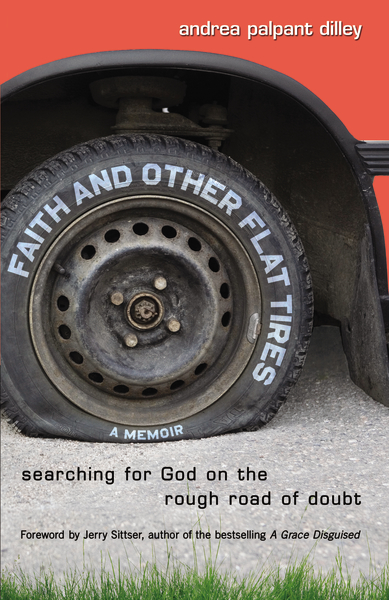 Another entry into the ever-growing “memoir” category, Andrea Palpant Dilley’s Faith and Other Flat Tires chronicles her journey from being a missionary kid to being a sort-of agnostic back to being some kind of theist. Using Pilgrim’s Progress as a (very) loose outline for her own journey, Dilley walks through the various stages of her own spiritual and intellectual travels and existential crises. And that is probably the central theme of the book (as much as a memoir can really have a theme): Dilley’s dealing with some form of extreme existential crisis.

In case you’re wondering, an “existential crisis” is something that has plagued individuals in the affluent West for the past century or so (at least since the writings of Kierkegaard and Nietzsche). In general it seems to be a sense of nameless despair over the possible meaninglessness of existence. Vague terms? Sure. But vague terms are essential to existentialism. To use an example from Faith and Other Flat Tires:

I believed in the afterlife… My belief had nothing to do with delusional fantasy or fear of death. It had everything to do with the instincts of my heart. The human condition seemed like a passageway to somewhere else. A throughway to the far-off mountains. What lay on the other side, I didn’t know. (291)

“Existentialism” then is the instinctual idea that the human condition is moving towards something greater, something just on the other side of the far-off mountains. (And “instinct” must be the word we use, because existentialism will hear nothing from reason and history—reason and history are both suspect and not to be trusted.) When our instinct tells us that there is a loving God on the other side of the mountains (as it told Søren Kierkegaard) the result is often faith and joy. When instinct tells us that there is a great nothingness and an abyss that we are headed towards, that human life simply exhausts itself and comes to an end (as it told Nietzsche), the result is either despair or licentiousness.

As a proviso, I should point out that Dilley’s book is very well-written and enjoyable to read, and one I would highly recommend to anyone who likes very thoughtful memoirs. She asks all the important questions, including (from the back of the book) “Why does God allow suffering? Why is God so silent, distant, and uninvolved? And why does the church seem so dysfunctional?” These are important—even critical—questions for anyone who wants to think seriously about the Christian faith specifically or human existence in general. Even better, Dilley asks them well, placing them in real-world contexts and showing their connection to everyday life.

And yet, I cannot endorse her answers to these questions. Near the end of the book, Dilley concludes [Spoiler alert!]: “The search itself, even with all its dead-end roads, meant something. I was sure of that… Faith directed me not away from but into my doubt, into those deep spaces of God’s dwelling,” (298).  This is at least part of why she picked Pilgrim’s Progress as an outline, since she found meaning in her own pilgrimage. The problem is, Pilgrim wasn’t on a journey because he enjoyed walking—given what he went through, you’d have to question his sanity if that were the case. He was on a journey with a specific destination in mind. He was going to the Celestial City. There was value in the “search,” as Dilley calls it, but it was a value derived from the destination, not a value inherent to the trip itself. In this, we can see one of the two major problems with existentialism and its response to crisis: it tends to value the journey more than the destination.

The other major problem has already been hinted at: existentialism relies too much on abstract personal instinct, on the sense of what I feel might be out there, maybe. This ignores the concrete reality of the Christian Gospel. To be fair, Dilley admits that she doesn’t know what to make of Jesus (276), but the fact remains that God relates to his people primarily not through how we feel about Him but rather through the historical life, death, and resurrection of Jesus Christ. We build on a flabby foundation when we try to find our hope and joy in ourselves and our instincts rather than on the historical reality of Christ’s atoning sacrifice. Existentialists do us a great disservice when they tell us to focus on our own inner life and its abstract inclinations rather than on the very real work that God has done in becoming a man and laying down his life in our place.

So do read Dilley’s book—it is a decent read—but read it only as a picture of modern existential angst, not as a source for good answers to her very important questions.

August 14, 2012
Odd Parenting in a Crooked World
Next Post

Entertainment
How we behave while the world is watching...
Schaeffer's Ghost

Entertainment
What you need to know about what the...
Schaeffer's Ghost
TRENDING AT PATHEOS Entertainment