Review of The Christian Zombie Killers Handbook: Slaying the Living Dead Within by Jeff Kinley

Coyle Neal recently discussed the relationship of zombie myths to Christianity. In The Christian Zombie Killer’s Handbook, I encountered another intersection between Christianity and everyone’s favorite mindless monster.

The book is, sad to say, a rather meandering, directionless, and ultimately discouraging discussion of the Christian’s fight against the ‘living dead’ sin nature, interspersed with scenes from a rather underwhelming, uninspired, and largely unrelated fictional tale of zombie warfare.  So, John Owen’s Mortification of Sin by way of Max Brooks’ World War Z.  But minus all the good theology and awesomeness.

It does start off with an interesting premise, however—according to the Bible, the Christian’s sin nature is supposed to be crucified with Christ . . . yet this ‘dead’ nature continues to live in and war against us.  Hence the zombie metaphor.  And it seems to work . . . at first.  Kinley encourages his readers to see their sin nature as a decaying, malevolent beast, etc.  The opening chapters are full of the reality of man’s filthy, decrepit wickedness, and most Christians will be able to identify with this idea of warring against something rotten that lives inside them and assaults the regenerate man within.

Unfortunately, the metaphor rapidly breaks down—partly because Kinley doesn’t use it well, and partly because the zombie metaphor just doesn’t work.  After all, this ‘zombie’ of sin is not attacking you from the outside; it’s inside you–it is you.  A zombie is an inherently external threat, and sin is an inherently internal evil.  As a result, all conventional zombie-warfare methods don’t fit the metaphor. 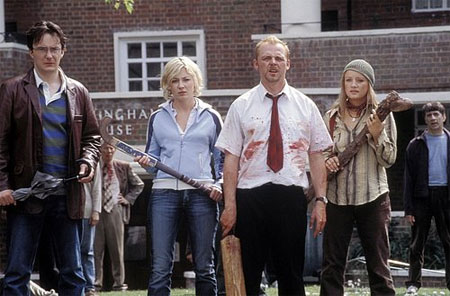 Zombie stories are all about avoiding that one fatal bite. According to the lore, once you’ve been bitten, you’re a zombie.  The fight is over and you lost.  There is no redemption for you, and if there are any uninfected humans around, their best bet is to waste you before you infect them.  As a result, you cannot afford to lose even one battle; any slip up is terminal.  Every loss is final and irredeemable.

So what’s the problem?  After all, God is a zero-tolerance God–any violation of His law is sufficient to earn us a place in hell.  But the simple fact is Christians cannot function with a zero tolerance attitude to sin.  Don’t get me wrong–I don’t mean that we should allow sin ‘in moderation.’  But when it comes to the fight against sin, the Christian simply can’t avoid being ‘bitten’–sooner or later (and probably sooner) you’ll give in to the ‘living dead’ sin nature warring against your soul.  We should oppose sin at every turn and strive for complete victory over it.  But we won’t taste that victory fully until heaven, and our plan of attack must allow for the inevitable losses we will sustain.  We aim to win while acknowledging that sometimes, in the short term, we lose. I don’t have a lick of military training, but I’m pretty sure that any battle strategy that begins with ‘and if we lose even one soldier, the plan fails and we all die’ is not going to be highly regarded.  There are bound to be losses, and any plan that cannot deal with those losses is of no practical use to us.

This is precisely why our fight against sin centers around the cross.  Jesus’ sacrificial death on the cross for our sins drives us to fight against sin with every fiber of our being, and when we fail—and we will fail from time to time—the cross pays for that failure.  The Gospel offers a way to redeem our losses.  This makes any comparison to the zombie (whose condition is inherently incurable) problematic.

And then there’s the fact that, as a Christian, you never fully slay the sin zombie within. It’s a lifelong struggle.  You don’t just kill the zombie once.  You kill him over and over and over again, every day, until you die.  (Of course, sometimes, you don’t kill him at all.  Sometimes you give in and invite him in for chicken salad sandwiches.  Because let’s face it, there are plenty of times when making friends with our sin seems much more appealing–or at any rate, easier–than fighting it.)
All of which present very real problems for Kinley—problems that become increasingly noticeable as his fictional narrative drifts further and further from the points he is trying to make in the ‘spiritual’ sections. Indeed, it is not entirely clear what those points are, as Kinley tries to address the external influences of demonic activity and bad company but is uncertain how to fit them into his use of the zombie as a metaphor for the sin nature within.
The issue is further clouded by Kinley’s reluctance to attribute victory over the ‘sin zombie’ to any particular action by the regenerate man.  And wisely so.  After all, apart from Christ we cannot kill our sin.  Only Christ can truly sanctify.  Which is great from a theological standpoint, but makes for a lousy ‘handbook’–especially one that relies on a warfare analogy.

The result is a disheartening ‘handbook’ that does a great job of telling you the problem–that is, that there’s a sin zombie living inside you–but doesn’t actually tell you anything about how to kill him. Instead, the ideas become increasingly scattered, and the relationship between the lackluster fictional tale and the incoherent spiritual discussions becomes more and more tenuous.  The end result is a book that feels like an ill-advised attempt to capitalize on the zombie zeitgeist.

1)  The book is chock full of ‘current’ references—both Justin Bieber and Facebook statuses are mentioned—that will rapidly date this book (further evidence of its ‘seize the moment, ride the zeitgeist’ feel).

2)  Kinley devotes an entire chapter to his own very specific eschatology.  I don’t particularly mind that he holds these beliefs, but they are far from universal among Christians, and I fail to see how they are necessary here.  He doesn’t really tie these beliefs to the rest of the text, so it ends up feeling like a rant connected only by the fact that zombie warfare has an inherently apocalyptic flavor.

Ultimately, I think this book was doomed from the start.  The zombie metaphor is simply not a good framework for discussing a Christian’s relationship with sin and the ‘old’ man; even in the hands of a better writer, it just wouldn’t work. Still, I liked Kinley’s description of man’s spiritually dead state, pre-regeneration, so it’s not a total wash.  But if you want to think well about fighting sin, you’re better off reading Overcoming Sin and Temptation (which includes John Owen’s excellent Mortification of Sin) or Kris Lundgaard’s The Enemy Within instead.

Alexis Neal is an attorney in the Washington, D.C., area. She regularly reviews young adult literature at www.childrensbooksandreviews.com and everything else at quantum-meruit.blogspot.com.
Disclosure of Material Connection: I received this book free from the publisher through the BookSneeze®.com book review bloggers program. I was not required to write a positive review. The opinions I have expressed are my own. I am disclosing this in accordance with the Federal Trade Commission’s 16 CFR, Part 255: “Guides Concerning the Use of Endorsements and Testimonials in Advertising.”

August 22, 2012
The Great Leap Forward to Famine
Next Post