Review of We the Underpeople by Cordwainer Smith

The year is 15,000 A.D, and humanity is perfect. People live for four hundred years in perfect health, and die a perfectly peaceful and perfectly happy death when their time is up. All hard work is done by devoted robots and loving “underpeople”—human-like versions of man’s best animal friends to do the dirty labor that had oppressed people for so long. Despite being spread out across hundreds of worlds, humanity has solved all its problems. As a result, humanity is dying of lethargy. In the five short stories and one novel contained in this collection, we get to:

Frankly, that brief summary doesn’t do this collection justice. With a writing style reminiscent of Tolkien, Cordwainer Smith has painted a world—a galaxy—full of fascinating characters, perilous adventure, and a richness and depth of setting that makes us want to walk the farms of Old North Australia, take Alpha Ralpha Boulevard to see the computer that tells fortunes, and sing the songs of the martyr D’Joan, who died for people and underpeople alike. 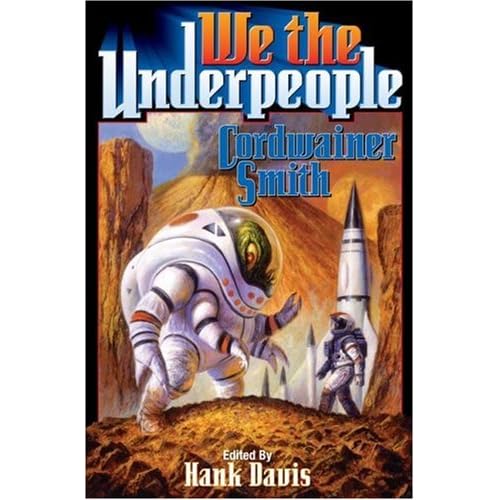 A side note: You’ve probably never heard of Cordwainer Smith. “Cordwainer” is of course a pseudonym (the word means “cobbler”), though his real name and life are (if possible) even more interesting than the future he imagined—Paul Linebarger was one of the founders of the CIA, wrote the book on psychological warfare (literally) and was the god-child of Sun Yat-sen (his writing bears a marked Eastern flavor).  He wrote science fiction on the side, and did it well enough that his short stories are included in most “best-of” anthologies to this day.

There is far too much in this collection to discuss in a single post. All of the standard science fiction questions are there: What is the nature of man? Does technology help or hinder human development? How does society adapt to radically new circumstances? What is the relationship between religion and science, especially in a technologically advanced society? The list could go on. But perhaps the most interesting question from a Christian perspective is the question of what fundamentally makes us human. Smith suggests that loving undeserving others in the face of a dangerous universe is what makes us human. In other words, that we love our neighbors (even when they don’t deserve it) despite and through the difficulties of living in a harsh world is what defines humanity.

One of the major themes of Smith’s universe is that both of these characteristics (love and danger) are necessary. For example, when we remove a particular danger from human existence (say, through the elimination of disease), we lose the opportunities that danger would have opened up to show our love for others by caring for them despite the danger (in the case of disease, the danger of contagion). When all danger is removed, when we know exactly when and how we will die and there is no longer any war, disease, famine, or risk; we lose all opportunities to love others in any meaningful way, and humanity begins to atrophy and die. In the same way when we remove love from existence, overcoming danger loses any value as the motivations for doing are increasingly dominated by selfishness. (This is one of the themes of Smith’s most famous story Scanners Live in Vain.) In We the Underpeople, humanity is gradually losing both of these necessary components, and only the underpeople can save us from our own self-destruction.

Like I said, this is fascinating to think about as a Christian. To some extent, we are defined as human by our ability to love others—this is one of the ways we are made in the image of God. Even more, this is a picture of what God does for us in the Gospel when he overcomes the “danger” of sin by dying for us, even when we didn’t deserve it (Romans 5:6-8). Jesus is the ultimate picture of what Cordwainer Smith presents as the definition of humanity. He and he alone loves the undeserving through the danger of God’s wrath. In the same way, when we love others despite the hatred of the world for the church, we are living the life God intended in creation.

And yet, we can’t push this definition too far. We have to remember that there are other characteristics of man: we have a soul and a body; we have reason, emotion, appetite, and will; we have a creation mandate; and, well, clearly there are quite a few other things that could be added to the list. (For a good, short reflection on some of the key characteristics of man, check out J. Gresham Machen’s The Christian View of Man.) Smith’s presentation of humanity is an important and interesting one, but it is one which should be kept within appropriate Biblical boundaries.

Even with that caveat, I highly recommend this book. It is well-written, imaginative, and thought-provoking with unforgettable characters and hauntingly beautiful worlds. Just to give you a sample of Smith’s writing style, this is from the beginning of the story “Mother Hitton’s Littul Kittons”:

The moon spun. The woman watched. Twenty-one facets had been polished at the moon’s equator. Her function was to arm it. She was Mother Hitton, the weapons mistress of Old North Australia.

She was a ruddy-faced, cheerful blonde of indeterminate age. Her eyes were blue, her bosom heavy, her arms strong. She looked like a mother, but the only child she had ever had died many generations ago. Now she acted as mother to a planet, not to a person; the Nostrilians slept well because they knew she was watching. The weapons slept their long, sick sleep. (173)

Coyle Neal is a Doctor of Philosophy who has not yet lost a patient. He lives in Washington, DC where he avoids practical politics at all costs.